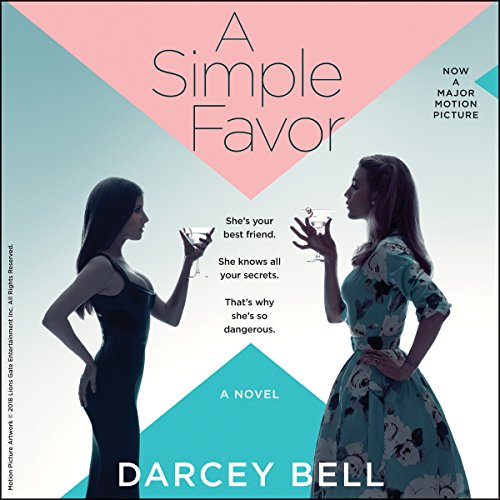 She's your best friend. She knows all your secrets. That's why she's so dangerous.

A single mother's life is turned upside down when her best friend vanishes in this chilling debut thriller in the vein of Gone Girl and The Girl on the Train.

It starts with a simple favor - an ordinary kindness mothers do for one another. When her best friend, Emily, asks Stephanie to pick up her son, Nicky, after school, she happily says yes. Nicky and her son, Miles, are classmates and best friends, and the five-year-olds love being together - just like she and Emily. A widow and stay-at-home mommy blogger living in woodsy suburban Connecticut, Stephanie was lonely until she met Emily, a sophisticated PR executive whose job in Manhattan demands so much of her time.

But Emily doesn't come back. She doesn't answer calls or return texts. Stephanie knows something is terribly wrong - Emily would never leave Nicky, no matter what the police say. Terrified, she reaches out to her blog's readers for help. She also reaches out to Emily's husband, the handsome, reticent Sean, offering emotional support. It's the least she can do for her best friend. Then, she and Sean receive shocking news. Emily is dead. The nightmare of her disappearance is over.

Or is it? Because soon Stephanie will begin to see that nothing - not friendship, love, or even an ordinary favor - is as simple as it seems.

A Simple Favor is a remarkable tale of psychological suspense - a clever and twisting freefall of a ride filled with betrayals and reversals, twists and turns, secrets and revelations, love and loyalty, murder and revenge. Darcey Bell masterfully ratchets up the tension in a taut, unsettling, and completely absorbing story that holds you in its grip until the final minute.

This is the book that has officially caused me to take a break from this vein of so called thrillers. It’s been a long time coming. Each new book in this genre has been worse than the last. “If you like Gone Girl you will love this!!” every new ~thriller~ proudly claims. No. Gone Girl worked because Flynn is a talented, thoughtful, careful writer who is rarely heavy handed and never shows her cards. Because the characters in her writing have depth, because we care for them, and because the descriptions are so rich you feel like you are there and because you can feel the story unfolding in a way that can make you feel like you are a part of the unfolding itself. Guys, these plot devices are over. The dead horse has been beaten into the ground. The narrator can not be unreliable if you never got the chance to know or rely on them in the first place. Extremely unrealistic dialogue, unrealistic thoughts, patronizing plot points, just ugh. I can’t even claim to hate the characters because they are so flat and dimensionless I am only seeing the writing the whole time and hating the way the author wrote them. It’s time to move onto non fiction for a while and ride out this influx of one terrible book after another till thrillers get good again. Good narration though I guess?

What I liked best about the book was that there were three narrators and all of them were excellent. I also thought that the book really moved. The reason why I only gave the book three stars overall was because I felt that the ending was very abrupt. I also felt that there were many aspects of the storyline that were bizarre and a bit contrived. I am unable to give specific examples because these examples would be spoilers for those who have not read the book. All in all, when the book ended, I was really not satisfied because there were too many loose ends.

I swear i loved this book up u til the final few chapters.

1. No one has any true consequences for their actions. It was like the writer was too scared to make any decisions on how it should all play out.
2. There’s no protagonist. You think there is. But there isn’t. Not really. Poor pitiful Stephanie doesn’t end up with a redeemable quality about her and you honestly finish this book hating the lot of them. I’m all for an anti-hero or whatever. But this is awful.
3. I didn’t want any of these characters to win. I didn’t want them to succeed. I was cheering for the police (who were too dumb to be even remotely believable. It just wasn’t real enough.

The voice actors read everything with a breathy and sultry voice that is grating after the first 15 minutes. They also do impersonations of other characters without dropping the wannabe-sexy tone. It was infuriating.

The story is a Gone Girl ripoff. Everything from the setup to the twist to the conclusion are clearly mimicking Gone Girl's design. Nothing in this book caught me off guard.

None of the characters in this story are likable or relatable. The main character tries to make her incest and love child with her own brother seem relatable. The friend tells her own twin sister to commit suicide. The male character is supposed to be intelligent and yet is manipulated by both women in ways that are totally unbelievable. Oh yeah, and mixed in all of this are two toddlers who are being needlessly tortured. It'd all be comical if it weren't so tasteless.

I read all of the negative reviws about this book and decided that I would read it anyway. I was glad that I did but the problem with this book was that it took forever to start. I loved it when we started hearing from Emily in this book because even though she wasn't a good person in this book she was my absolute favorite. I loved how cunning she was and how it all ended. Emily was the only interesting person in this book. Stephanie was so annoying that I wanted to just punch something(namely Stephanie if it was at all possible) I'm pretty sure Stephanie was supposed to be that annoying but it really bothered me. overall I did enjoy this book although it did take time to start. but definitely something I would recommend

The story line jumped around relentlessly. There's one "bad guy" after another because it's constantly changing, but none of them are actually believable. There are some seriously unrealistic leaps taken at the end, in what I assume is supposed to be a "surprising twist," but the result is unbelievable drivel.

I'd say for the first half of the book, I was optimistic, then it just became more absurd. What makes books in this genre enjoyable is the fear/thrill that they could happen in real life. This could not happen in real life; this book simply can't be based in reality because no person could be as hopeless as the characters in this book.

the voice work solid, but..

I thought the story was bad. Plot was nonsensical. The main characters were just a mixture of nuts and dumb. There was nothing to take away from this.

Read this if you root for the bad guy

I didn't give it 2 stars because if you just need a story on your way to work or as you're doing other things...background noise, then it's fine. But if you want to invest in characters and need a great plot twist then don't bother. Everything is predictable and for the first time I'm going to criticize these characters. I might have liked them, I wanted to but they ended up being just unforgivable, dumb and dumb...that is my judgement of all three. Narration is fine, story is fine, twists are predictable, plot is fine, ending is weird.

Captivating, humorous, an around great read.

Watched the movie and really liked it, it differs from the book quite a bit. I liked how the narration was done with several people, very talented and thrilling. I'd like to read it again someday.

I have a simple problem with this book. There was not one single relate-able or likable character. I found all of the characters to be ill formed and detestable and the dialogue between them stilted. The book relies on some very old tricks and gimmicks that were hardly a surprise. I was waiting for the twist and it never came. Also missing - a resolution. It was as if the author said “enough already - I need to be done with this. You figure out the ending.” I listened thru because I liked the idea of a blog as a plot vehicle and I really wanted things to come together or a Gone Girl style twist to happen but alas... it didn’t. Vapid characters and weak plot.