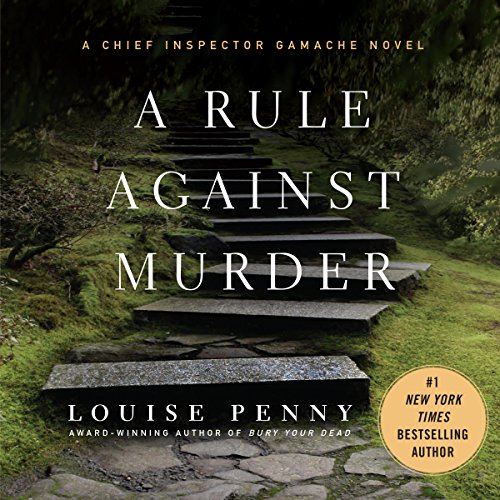 A Rule Against Murder

A Rule Against Murder

"What happened here last night isn't allowed," said Madame Dubois.
It was such an extraordinary thing to say it stopped the ravenous Inspector Beauvoir from taking another bite of his roast beef on baguette.
"You have a rule against murder?" he asked.
"I do. When my husband and I bought the Bellechasse we made a pact.... Everything that stepped foot on this land would be safe."

It is the height of summer, and Armand and Reine-Marie Gamache are celebrating their wedding anniversary at Manoir Bellechasse, an isolated, luxurious inn not far from the village of Three Pines. But they're not alone. The Finney family - rich, cultured, and respectable - has also arrived for a celebration of their own.

The beautiful Manoir Bellechasse might be surrounded by nature, but there is something unnatural looming. As the heat rises and the humidity closes in, some surprising guests turn up at the family reunion, and a terrible summer storm leaves behind a dead body. It is up to Chief Inspector Gamache to unearth secrets long buried and hatreds hidden behind polite smiles. The chase takes him to Three Pines, into the dark corners of his own life, and finally to a harrowing climax in A Rule Against Murder.

"Celebrated British narrator and actor Ralph Cosham brings this wonderful murder mystery to life and draws in listeners with his charisma...Cosham's characters are refreshingly original and never overplayed, and the Old World quality of his voice invokes radio murder mysteries from decades past, creating an endlessly entertaining listening experience." ( Publishers Weekly)

What did you love best about A Rule Against Murder?

I've read all of Louise Penny's books. She is a wonderful and gifted writer. When I saw her books on Audible I started listening to the books. I have enjoyed the retelling of each story. The voice of Ralph Cosham is so soothing. Just like I would imagine Inspector Gamache sounding if he were a real person.

As I stated before Mr. Cosham sounds as though he could be a Inspector Gamache if there was such a person in reality. So charming and mature.

The character development continues to get better and better. Such likable people even when they do unlikeable things! And Ralph Cosham is the perfect narrator. A perfect blend of French and English in a rich and alluring voice. I get lost in the moment every time I "pick the book back up"!

Good but the ending

I love the narration, the humor, the mystery but this one I did not like the ending. I appreciate a twist this time it was both too obvious AND out of nowhere t the same time. Clues that were not shared so that the reader had no chance to come to the same conclusion.

These books just keep getting better to me. I have to admit, I only bought them because Ralph Cosham narrates them, and he helps me sleep, so it can take quite awhile to get through a book with all of that morning rewinding. But now that I'm getting to know the characters better, I want to listen all day. My chores get done. I do my Pilates. I don't mind the commute. I've got the whole set and I'm looking forward to the next ones! As cozy mysteries, I get the whodunnit suspense without the gore, Penny endows her characters with a gentle sense of humor, and then there are those life lessons we need to be reminded of, so all around, these Inspector Gamache books are worthwhile listens!

my favorite Gamache to-date. looking forward to the next one. interesting change as it is not set in 3 Pines. loved it, love Gamache.

A bit lacking in characters

Good book but it lacked the interactions with the characters we have grown to know and love. No Ruth. Good story though

You're going to have fun trying to solve this one!

Take a vacation from Three Pines, and follow Gamache and handful of your other favorites to a new setting and another unique murder. You're going to have fun trying to solve this one! If you're like me, you'll be shouting your guesses at the narrator and then second guessing yourself with each new chapter.

Full of picturesque descriptions, you'll feel like you, too, are having a lovely lakeside retreat. And you're going to LOVE how this story connects to those you know and love from Three Pines. Just wait until you meet this family!

Has tones of Agatha Christie’s books Love a good mystery, theses books are for you

I have enjoyed other Louise Penny books but this one was confusing to me. I had a hard time keeping track of everyone. The reader is excellent and easy to listen to even when I’m confused!!

As the books progress we are treated to a deeper level of intimacy with the main characters not often accomplished in other crime novels. It is more than refreshing as it causes one to think and consider life, its frailties and its accomplishments. I thoroughly enjoy this series and am always eager to read the next.