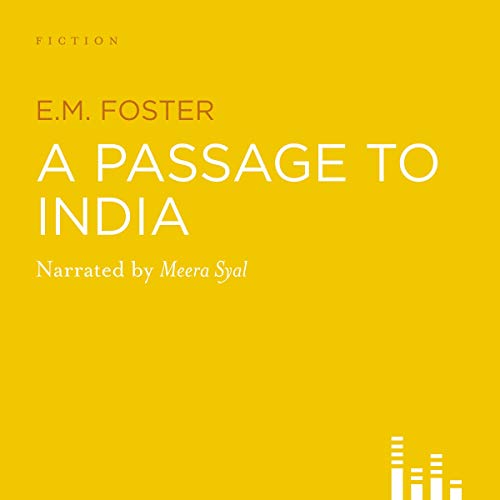 A Passage To India

Adela Quested travels to India with her chaperone Mrs Moore, on the premise of deciding whether to marry Mrs Moore's son Ronny Heaslop, the city magistrate. Finding her India very disappointingly English, Adela jumps at the chance the two women are given to travel to the distant Marabar caves with Aziz, a charismatic young Indian Doctor.

When Adela is subjected to an attempted assault in one of the caves, Dr. Aziz is arrested and tried in court. The volatile situation forces British India's cracks to widen into chasms, although bridges of hope are found in some open-minded British characters like the logical college principal Mr. Fielding.

Forster's eloquent and mature prose style makes this unique and sensitive audio version of the classic story a moving and philosophical experience.

No the full book

Because I wish someone had said this before I bought the audiobook: this is an abridged version, not the whole book. I was going to read along with the audiobook because I get distracted when reading for class but I couldn’t since it leaves out massive chunks of text on every page. Maybe I just didn’t see the warning anywhere and missed it somehow, but I wish I knew this wasn’t the whole book before buying it.

The reading is very well done, alternating between accents and characters in a way that make the story interesting and easy to follow.

Exquisite reading, draws the listener in.

A compelling story of how fear and prejudice affect our perspective. Thought provoking and enlightening.

This is not the full book!!!

Be careful, this is an abridged version. I wish I would have read the reviews before paying $11.

This audiobook has the. Freaking. Coolest Indian music in between chapters. I had to read it for school and it was the only reason I was able to finish the entire thing.