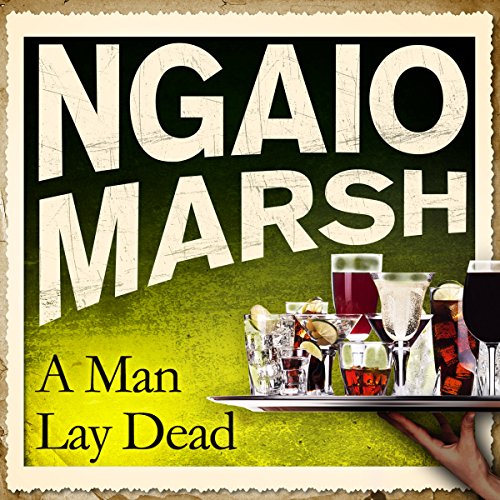 Wealthy Sir Hubert Handesley's original and lively weekend house parties are deservedly famous. To amuse his guests, he has devised a new form of the fashionable Murder Game, in which a guest is secretly selected to commit a 'murder' in the dark, and everyone assembles to solve the crime. But when the lights go up this time, there is a real corpse....

"A Man Lay Dead," although published in 1934, holds up well as an intriguing classic mystery. Like some others of its kind, the novel might have been batter read than heard. That is not to say it was not well performed,(It was.) but that there are so many characters, one practically needs a score card to keep them straight. As the book progressed and some of the red herrings were caught and set aside, it became easier to follow the development of plot and character.
I did get involved enough that I found it difficult to turn off the recording. This might be a great "read" for a long and otherwise dull car trip when one could listen to large sections at a time.

What made the experience of listening to A Man Lay Dead the most enjoyable?

After exhausting the Hugh Fraser narrated Agatha Christie books, I turned my attention to Ngaio Marsh novels. I knew Inspector Alleyn from the 1990s Alleyn Mystery series, but nothing about the books. I decided to listen to the series in order. Lucky for me, Philip Franks narrates the first book in the series. He takes this 1934 detective story and makes it such fun. Franks' interpretation brings a breeziness to the story (especially in the way he voices Alleyn) that adds wit and charm. In a later novel, Artists in Crime, narrated by Franks, his interpretation of Alleyn's mother adds a dimension of character and wry humor that other narrators do not deliver. Mama Alleyn's analysis of the suspects is rewind and listen again funny. Franks delivers the lines as people actually speak. Franks performs this audiobook, he doesn't read it. The other predominant narrator in this series, James Saxon, seems to me, to read in such an overly melodramatic fashion that makes it much less enjoyable. In Saxon's readings, Alleyn comes across as stern and humorless, even though the books are filled with sardonic descriptions and conversations.

Not really, it's a good representation of the cozy mystery genre. I enjoy that genre for telling a story without being gory. The development of the characters is the jewel in this series. That being said, Marsh is probably a better representation of what society was like in the 1930s (that's the decade I'm currently on in this series) than Christie. Much more acknowledgement of sex, drugs and language than Christie.

Everything. He's a gem and perfectly suited to this material. He's able to perform distinct voices (in a novel with a lot of characters) so that you know who is talking. Like Hugh Fraser, his female voices are very good (although Angela's voice changes from her first scene where she has a deep voice to a lighter "girlier" voice later that's much better). He interprets Alleyn, Fox, Bathgate and Angela in a way that makes you just love them.

This is a solidly-crafted cozy mystery that brings a lightness and wink-wink, nudge-nudge, we're-all-having-fun-now element to it. Well worth the time and easy to listen to multiple times.** Audible: If you will re-record the Marsh novels with Franks reading, I will re-purchase every one of them - truly.** He's perfect.

if you read Ngaio Marah, you know own what you are getting: a solid mystery (logic pizzzle) with a teeny bit of character development for the detective thrown.in over many novels. I love these books and two classic British detective genre. there is a very good reason Marsh ranks up there with Christie and Sayers.

here, the narrator/voice performer does am excellent job with the different characters.

Page turner. Suspenseful great audio book. I love the twists, turns and details of the select stars like Marsh.

great start to a series.

I enjoyed this story. i like that there was a sub plot also. The narrator does a fairly good job. Got lost as to who was speaking a few times but overall very good. The solution was unique.

The narrator is absolutely perfect.

This is a great book and the narrator performs so well that I could listen to him all day.

A great example of the classic “murder at the manor “

Ngaio Marsh invites us to join a fascinating cast of characters as they play “Murder” during a weekend in Sir Hubert’s country home. Predictably, the game turns deadly but the plot’s twists and turns were unexpected. Inspector Alleyn is, as always, urbane, witty, brilliant AND very human. Philip Frank’s performance is a delight. Each character’s voice is unique and consistent. Frank always manages to resist caricature. I thoroughly enjoyed this book!

Save us from murders at British weekend house parties. And save us from mysterious gangs of foreigners. The introductory Alleyn novel had included these and other overworked British mystery themes. Alleyn himself is clever and intelligent but not well developed as a character. In short, give this a miss unless you are set on reading the whole series.

First listened to "A Surfeit of Lampreys." Delightful characters. Kind of confusing story but that really didn't matter. Chose that as Marsh's reported best. Liked it sufficiently to start from the beginning of the series. Flimsy. Weak. Dull. On to something else...