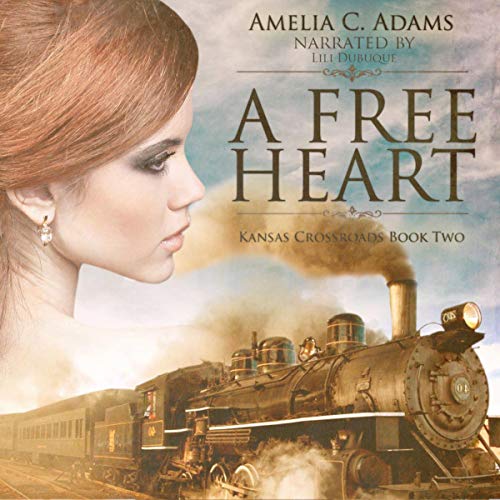 Harriet Martin left her plantation home in Atlanta and came to Kansas with one thought on her mind - finding the mother of the man she was supposed to marry. She will never find peace or be able to move on until she knows that Jane, a former slave, is safe and happy.

Tom White wants nothing more than to be his own man - traveling where he will, taking whatever jobs come his way, moving on again when he gets feeling itchy. Now working at the Brody Hotel, he starts to put down roots for the first time since he was forced to leave his home at the age of 15.

Both stubborn, independent, and free spirited, Harriet and Tom have more in common than either one wants to admit. By the same twist of fate, they each have exactly what the other needs - if destiny will allow them to find the happiness they’ve been seeking.

So for I’ve loved all the books in this series. They’re fun and clean. This one had some sad parts, but nothing too depressing. I loved all the medical things this one had. I’ve never thought about how they dealt with breaks years ago- it was very informative. The narrator was great as well.

Love grows on you.

Great look at living in the old West. The author put an unusual twist in this-including the relationships Harriet had with their former slaves. She was a plantation daughter who moved west to reconnect with these former slaves. There was a good discussion of racial relations in the late 1800s. Tom was a drifter who had a hard back story but he was working at the same hotel. This was a story of growth and forgiveness and loving.

A delightful short and sweet read

I truly enjoyed listening to this story. For a short time at first, I felt the narrator was slightly too monotone and it was difficult to differentiate between characters (especially different female characters). However, as the book continued, I either got used to it, or it got better, because I didn't notice it being a bother anymore. But I do recall having that thought at the beginning, do I thought I'd mention it. But even with that, I would recommend this book to anyone looking for a clean, sweet romance. It held my interest, and I felt very satisfied with it from beginning to end. I wasn't left wanting anything different.

I couldn't take the narrator

I honestly did not finish this audiobook. the voice and inflections if the narrator made it too difficult to listen too. I have read another of this series before, and it was sweet and charming. So this one is probably also, I just couldn't listen to it.

I’m a big fan of this author and this series. A Free Heart is a delightful, clean historical romance. I enjoyed the genuine characters, humor, and western setting. I’d love to hear the author narrate one of her own stories!

The story in this book continues the story of Adam & Harriet along with the main characters. Lots of tension in the relationship makes for an interesting road to marriage. My only complaint is that it's so short, but that's the nature of these books. You've done it again, Amelia! I didn't care for the drab voice of the reader. There is so much humor and joy in these books that was lost by the reader/performer.

This series has been fun to read. I love Amelia Adams books. She tells the best stories. I want to visit the Brody Hotel.