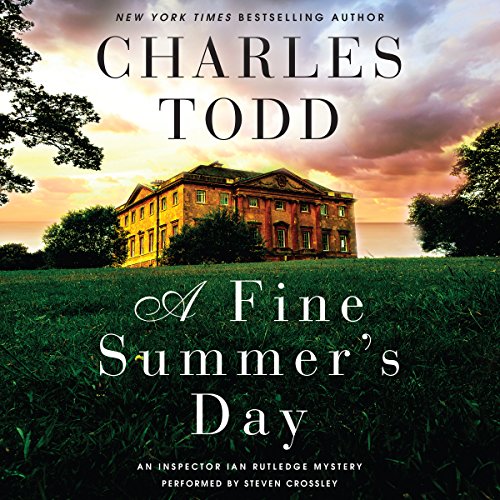 On a fine summer's day in June, 1914, Ian Rutledge pays little notice to the assassination of an archduke in Sarajevo. An Inspector at Scotland Yard, he is planning to propose to the woman whom he deeply loves, despite intimations from friends and family that she may not be the wisest choice.

To the north on this warm and gentle day, another man in love - a Scottish Highlander - shows his own dear girl the house he will build for her in September. While back in England, a son awaits the undertaker in the wake of his widowed mother's death. This death will set off a series of murders across England, seemingly unconnected, that Rutledge will race to solve in the weeks before the fateful declaration in August that will forever transform his world.

As the clouds of war gather on the horizon, all of Britain wonders and waits. With every moment at stake, Rutledge sets out to right a wrong - an odyssey that will eventually force him to choose between the Yard and his country, between love and duty, and between honor and truth.

As I began to listen, I had forgotten that this is a "prequel" and takes place in 1914, beginning on the day that the assassination in the Balkans takes place, "a fine summer's day" in England.

My first thought was "All those readers who keep saying they want to see the last of Hamish will get their wish, at least temporarily," while also thinking - will I like Ian Rutledge from before the war?

I have to admit that for the first couple of hours I was puzzled and confused because Rutledge has to go from case to case to case (Old Bowles on the rampage), and the cases are all over the country as well as involving different characters and local policemen. Consequently, the setup for this one is, like some of the recent books in the series, quite complex and may try your patience. But hang in there. There is a method to the madness, and once this first bit is out of the way, I thought this entry was superb. I had trouble stopping once it got going and will say no more about the mystery.

It is fun to meet some of the characters that you have previously been introduced to only as a look at the past, and I think it helped flesh out Ian Rutledge as a real person. We meet his Jean and her family and see much more of his relationship with sister Frances and family friend Melinda Crawford.

The narrator, Steven Crossley, is one of my favorites (he reads the Shardlake series), and does a creditable job of distinguishing most of the myriad of characters.

Kept me thoroughly engaged and I loved it!

An Introduction to Ian Rutledge

This story is listed as #17 in the series, but I feel it should be Book #1.
Read it first, as it tells of Rutledge's life BEFORE the war, and how he's pressured both internally and externally to enlist for the Crown. This was probably true for most young men at the time. The other books I've listened to are all about Rutledge after he returns from WWl. Steven Crossley was ok for me as a reader, but I prefer Simon Prebble, the reader in later books.

My first Ian Rutledge and first Charles Todd. It all came together nicely. Crossley...as great as ever. There were so many sub-plots and mysteries, that I had to do a lot of re-reading to remember who was who. Adding the commencement of WW1 to the mix made it even more of a wild ride. But, historically, it was helpful framework.

It will be interesting to read a few more, at least, to see Rutledge back from war and all "grown up"!

Really excited about this series

This book is my first experience with the Ian Rutledge series. Though it is the latest release, I understand it is a prequel to the series. I enjoyed the story and characters so much that I immediately bought 3 extra credits and used them on the first 3 books of the series. Although "whodunnit" is clear to the reader pretty much from the beginning, I loved following Rutledge's mental process in figuring it out and dealing with local policemen and his own superior, who just wanted a quick and simple solution. I am eager to find out what happens to Rutledge when he returns from war and how his relationships with the other characters -- his fiancée, his sister, his co-workers and the girl who is perhaps a better match for him than his fiancée -- evolve as the series progresses.

The best so far in this series

I've read all of this series and I think this one was the best. It filled a void I didn't even know I'd missed. We see a young Rutledge before the war that permanently changes him. An intriguing mystery and a glimpse of how Ian's life could have been without the horror or war.

A Welcome Earlier View of an Old Friend

Thank you, Charles Todd for this wonderful gift! It's a glimpse of the strong, confident, happy Ian Rutledge we know must have existed before the ravages of war.

Ian is planning his marriage to the young and self-absorbed Jean while becoming more and more involved in an unusual case. The perpetrator is diabolical, and Ian must convince himself and others in law enforcement that his suspicions are real. There's a lot of darting about the countryside and putting together clues from churchyards and archives, but the story emerges in a most intriguing way. Inspector Bowles is just as contrary and vindictive as he will later be, and we get glimpses of Ian's sister and aunt in earlier, more carefree days.

There is, however, another 'villain' in this piece. Just as menacing as any criminal, WWI is relentlessly in the background. Friends and colleagues are already marching off with enthusiasm to serve their country, and the knowledge that Ian Rutledge will soon follow - and will pay dearly - is painful to the listener/reader . It all makes for a bittersweet experience but one which this series fan really appreciates!

What did you love best about A Fine Summer's Day?

This book shows us a younger, more lighthearted Rutledge in the months leading up to World War I. Though conscientious and thoughtful, Rutledge is not burdened by traumatic memories of the war and his consciousness of his psychic wounds. In particular, he is not haunted by Hamish. This book captures the man and his time very well.

Rutledge of course. Next was the woman who did his research on the jurors for him. She was independent, intelligent, and personable, and one of the few women (like Melinda and Frances, and one or two others) who could possibly be a positive influence. Like everyone else, she is not affected by the war yet. She would make a strong counterpart to Rutledge and perhaps help him heal.

Have you listened to any of Steven Crossley’s other performances before? How does this one compare?

Of the 3 narrators, Crossley's performance is the one I like best. His narration is even, not at all disjointed, and captures Rutledge in all his moods. Simon Prebble,as the narrator of the postwar Rutledge stories, captures his internal desolation well. But this requires a kind of of depressive tone, which can be depressing.

BOTH NOVEL AND NARRATOR ARE EXCELLENT.

I really enjoyed A Fine Summers Day. It held me until the end. I rather enjoyed not having 'Hamish' around. Really enjoyed the narration. Excellent. It's a pity that all the other books Steven narrates aren't my cup of tea. Very smooth to listen to. I highly recommend.

Introduction to Rutledge, the Yard, and War

This is an excellent prequel to the multiple novels about Ian Rutledge and his Scotland Yard cases after World War I ends. This book sets up Rutledge's strong detective skills, establishes the hostility that Chief Inspector Bowles has for him, and shows his pre-war relationship with fiancée Jean and sister Frances. Even though I have read or listened to all the succeeding novels, this one makes me want to go back and start all over again! A good read (or listen, in my case)!

Did not enjoy the narrator.

Well done as a prequel but am looking forward to the next book with Simon Preeble back.