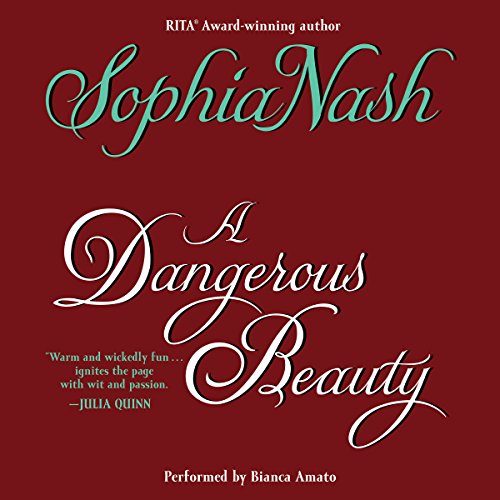 Love, n. A temporary insanity curable by marriage or by the removal of the patient from the influences under which he incurred the disorder. (The Devil's Dictionary, Ambrose Bierce)

Rosamunde Baird has lost everything and has no choice but to accept an invitation to spend a season with a dowager duchess and her clandestine ladies' club. Determined to stay in the shadows and live quietly, she has sworn never again to come face-to-face with adventure and temptation, two things that brought her ruin years ago. But then the duke of Helston dangles before her the very things she craves most....

Mysterious Luc St. Aubyn has a much-deserved reputation for exuding blistering passion at night and frost the morning after. What demons drive this audacious war hero to hide secrets about the dowager's club and his devilish dictionary? When he's blindsided by his reactions to a virtuous siren, he has no choice but to reveal all during a scandal that will doom them...or save them, if only they dare to believe in love.

What made the experience of listening to A Dangerous Beauty the most enjoyable?

Bianca Amato is incomparable when it comes to narrating emotion-packed novels. Her voice is fantastic, and she infuses each phrase with the right emotion and cadence for each character, and for the written word. She also is one of the few women narrators I've come across who can do male voices well. This story by Sophia Nash is superb. But Amato's interpretation carries it with a grace and power that forces you to swiftly become captivated. This is one of those rare audiobooks that I quickly opt to hear a second time.

Luc (although Rosamunde is close behind). Both the hero and heroine are multi-faceted, and have made mistakes in the past that have forced both to closet their emotions in the present. Both misinterpret the other, but it's not in the melodramatic way that one often sees in Regency romances. It's subtle. A third strong character is his grandmother, Ata. She is opposed to their match, but she's otherwise in Rosamunde's court. Nash makes Ata a much more nuanced character than the usual resistant relative.. And Grace, the countess, is fabulous as well. Most of the characters break the mold, showing the mixed sides of human nature.

Have you listened to any of Bianca Amato’s other performances before? How does this one compare?

YES...Loved her in Tracy Ann Warren's "The Husband Trap,'' and its sequels, and in "The Paid Companion'' by Amanda Quick. But what sold me on Amato was her narration of Mary Balogh's "The Proposal," part one of her 7-part Survivors Series. Balogh's biggest mistake was to switch narrators for the rest of the series. Amato was exquisite. Audible should hire her to re-record the rest.

Passion: A curse, and a savior.

A touch above most

This book is a touch above most historical romances. It is more polished and has a tone somewhat reminiscent of Jane Eyre. The heroine is horribly and wrongfully ruined and marries another man to escape the demand that she marry the man who supposedly scandalized her but who doesn't want her. Bad mistake because the man she marries is a lowlife abuser and she is stuck with him for a few years until he dies. She is still young and beautiful, but still stigmatized by what happened to cause her to marry the creep. Now she and her sister are out of a home unless she marries the heir of her abusive dead husband, who is also a lowlife. Thankfully the heroine is asked to visit a country party by a Dower Duchess who collects lost souls. The current Duke is in residence at the party and he and the heroine have great chemistry. You must listen to the book to find out if the heroine can overcome her damaged reputation and if she can find true love.

The story flows well, the characters are interesting. Good start of Historical Romance series. Fun to listen to.

BA is one of my favorite narrators, she does a good job in this book, although I think she did better in other books.

Story: 4 stars, interesting characters, good writing, good flow for HR. Entertaining.
Narration: 4 stars, good
Relationships/ heat: nice development of the relationship, not a classic therefor more interesting. Mild heat with appropriate emotions.
Overall: worth a credit, will get the next book in the series

The book started with a good premise about an abused wife, now widow, being brought into the protection of a duchess who wishes to give her "charges" a new life of freedom. However, it was executed poorly. There are so many things wrong here. The author sets up a scenario where the heroine is a well loved child who grows into an impulsive young woman. Yet that family, especially the "doting" father, that supposedly loves her so dearly, somehow allows her to be bullied, hit by another man, then abandoned for something she did not do. They don't believe her story and, instead, believes the accuser/Duke who is clearly a bully and abuser, especially since he hit her right in front of her father with no repercussions. Their standing in the community is more important than their love apparently. The father, by the way, is an earl so he has lots of standing himself. And the Duke has no really reason to want to force the marriage to his son. The young son, who is also being forced into the marriage, loves another, but can't put out the effort in his love to stop his father from pushing the issue. The Duke acts as if an earl's daughter is like marrying a tavern wench. And the heroine's family puts up with all this.

So then the heroine rushes into a marriage with a local country squire (why?) to escape her disgrace (?) after her whole family abandons her and discovers her new husband is an abuser. Her sister somehow manages to leave said loving family to live with her and her abusive husband and no one, no one, in the loving family comes to fetch the sister back nor do they try and reconcile with the heroine.

If this is what a loving family does I am not sure I would want one. The logic choices of the characters just seem to dwindle from here. The scenarios are just set up as straw men to be knocked down again. The author says the heroine is a great beauty but then later she writes that she isn't a beauty, at least in the eyes of the hero, but he is still attracted to her. The attraction between the hero and heroine is rushed and unbelievable. They kiss barely hours after meeting and the abused heroine allows it for some reason. Strange actions from an abused woman. The timeline doesn't make sense. The loving family is a joke. The main theme here is that love is acting like a jerk towards the people you love.

The narrator is decent but reads sooo slow. The pauses are sooo long. I had to speed up the playback.

Sadly, I would skip this book.

I LOVED THIS BOOK

This book was funny, sexy, sad, happy and an emotional roller coaster. The narrator was excellent...do yourself a favor and use a credit on this one. It's a keeper! Hope there will be more to this story..or more from this author and narrator. Loved it!!

Kudos to Sophia Nash and Bianca Amato for a book that intrigued and entertained. I didn't want to stop listening even for sleep. Would love to see more from this author. Bianca did a stellar job with the various characters and their feelings. More from both, please.

The wit of this novel will thrill you! I listen to it once a year because of the depth of characters and supreme wit!

This was a dreadful book

I had read one other book by Sophia Nash (Between the Devil and the Deep Blue Sea) and it was quite humorous and engaging. This book is NOTHING like it!! This book is dark, depressing, and the "hero" is a complete jerk. I TOTALLY wasted a credit!! I got as far as Chapter 3 and I just couldn't take anymore:(((

Enjoyed every word. I especially loved the banter between the Duke and his grandmother. It had me laughing out loud several times. I will definitely listen to this again!

Oh my goodness this book took me on a trip. I loved all the characters (some most definitely less than most though) and I loved the development. The main characters spoke to me and I was easily drawn into this book. I didn't know it was possible to be addicted to a book but this one did it. It was just...oh words can't explain it...and if I try I'll ugly cry again about how beautiful it was. Just read it. Go on. Stop reading this stupid review and go.