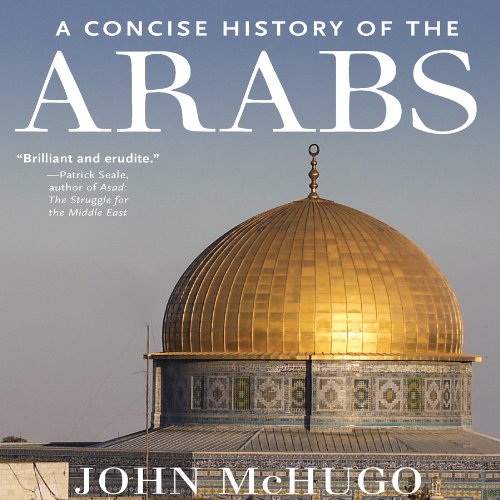 A Concise History of the Arabs

The key to understanding the Arab world today - and in the future - is unlocking its past. John McHugo takes the reader on a journey through the political, social and intellectual history of the Arabs from the Roman Empire right up to the present day. He covers the mission of the Prophet Muhammad, the expansion of Islam, medieval and modern conflicts, the interaction with Western ideas, the struggle to escape foreign domination, the rise of Islamism, and the end of the era of dictators.

The concise history reveals how the Arab world came to have its present form, why change was inevitable and what choices lie ahead following the Arab Spring.

Must read to understand history of the Arab world and the middle east up till today,and very balanced book for all nations mentioned .

I enjoyed the opportunity tho review the history of the Arab. I would enjoy it more if the author haven't lost his cool and refrained from the emotional outbreaks when he approached modern history. Any history of the Arab world would lose its appeal with the first anti-Jewish remark just as the opposite is true.

As an alternative narrative of Muslim history I would recommend the excellent A Brief Guide to Islam by Paul Grieve also available from Audible.

Interesting, educating, but not balanced

What did you love best about A Concise History of the Arabs?

The capability to summariize the long and complex history of the Arabs in a relatively compact form. Good reference and I will certainly come back to it.

If you’ve listened to books by John McHugo before, how does this one compare?

This is my first

Which character – as performed by Peter Ganim – was your favorite?

The author is not balanced in its attitude towards Israel as a part of the modern Middle East. Where he could provide a positive angle, he avoided reference to Israel. He claims this is not a history of Israel or of the Israeli-Palestinian conflict, but uses every opportunity to (concisely) refer to Israel in a negative way.

Despite my comment on the Israeli angle, my overall ranking is high because I was captured by the story and the way the author tells it.

Starts with the Life of Mohammed: you do the math

What disappointed you about A Concise History of the Arabs?

Might have well been "A Concise History of the Trayvon Martin Case" by Rev. Al Sharpton.

What could John McHugo have done to make this a more enjoyable book for you?