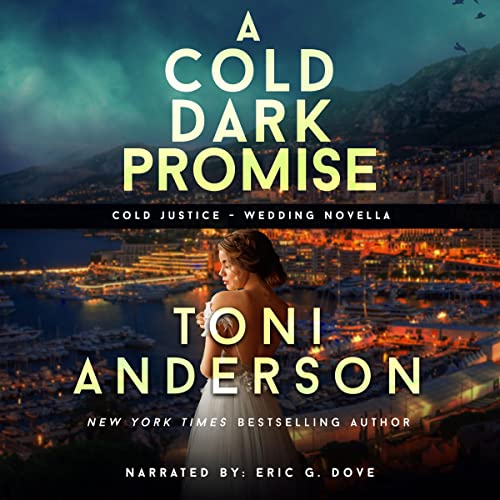 A Cold Dark Promise takes place during the week leading up to the wedding of former assassin Alex Parker to FBI Agent Mallory Rooney, who meet and fall in love in the novel, A Cold Dark Place. In the midst of wedding preparations, a shadowy figure from Alex Parker's past reappears and threatens the joy he's found with Mallory Rooney.

Four years ago, Jane Sanders' rich and powerful ex-husband kidnapped their young daughter, and Jane hasn't seen her since. Now, she finally has a lead on her location, and she knows just the man to help her get her daughter back. Trouble is, he's an assassin. And he terrifies her.

Despite his upcoming nuptials, Alex agrees to help, but it doesn't take long for the routine operation to turn complicated and deadly. Can the former CIA operative make it home in time to marry the woman he loves, or will his dark past destroy all hope for their future?

This is a very painful story of a woman who tried to follow the law only to have to law let her down. Years ago she fell in love with a wonderful man at least she thought he was, that is until the day she found out what he was really like. Years later tired of the abuse she got a divorce. The first visitation she had a bad feeling but she did the right thing and let her daughter go spin the weekend with her father. That was the last time she saw her daughter, many years later she is still hunting for her and her ex she has finally found them but needs help from the one person who she is afraid of. Will her fear win out or will she turn to the assassin from her past to bring her baby home.

I just love Eric G. Dove as a narrator he pulls you in with a very strong and powerful voice. His character voices are wonderful from his male to his female. He gives wonderful emotions you always know what each character is feeling. There are no background noises, no volume changes or any breaks just a clean clear and power listen. His tones are outstanding you can feel the passion, excitement as he holds you on the edge waiting to see what happens next. His normal voice is just as pleasant as his character ones. This is one of the few narrators that when you see his name you know you are in for a highly entertaining listen that will hold you spellbound through the excitement and thrills. He knows how to bring the story to life getting your attention and keeping it.

Ms. Anderson is truly an amazing author that gives you an exciting adventure in each of her books. You never know what to expect you just know it is going to be a wild ride. When Alex’s and his wife decided he needs to take this mission, knowing how it must feel to lose your child and never giving up hope to see her again. It is a race against the clock to see if he can not only complete the mission but make back alive in time for his wedding. This pulls on your heartstring when you see the child as they do their best to get her back to her mother. Things do not go as planned with some hair rising moments that leaves you holding your breath waiting to see the outcome. There was one place where I just put my head in my hands and said OMG can this get any worse. I was so sure he wouldn’t make it out alive. It is wild ride full of action, thrills and excitement that keeps you one the edge with great characters we have come to love. I really enjoyed this audio and can’t wait until the next one.

I love everything this author writes. This is one of the best series I have read!!

The entire series is full of suspense, mystery, thriller s and romance. a truly must read.

New budding love, suspense, strengthening relations... what’s not to love.
I love this series, but this book is a bright light and breath of fresh air.

This story takes the reader throughtge wedding of Alex and Mallory. Love the twists and turns Alex takes to get to the wedding on time. another great story by Toni Anderson

Oh I love this series. I enjoyed this novella. Glad to see Alex and Mallory finally get married. I wish they would have had the baby though..Sigh..

The story line and plot was good and I liked how fast paced it was. Not full of filler moments. Lots of dialogue throughout the entire book.

As for the narration, well its Eric Dove so it was superb! He does such a great job on all the female voices. And his reading voice is pretty sexy. Just sayin.. Love his narrations!

As always Toni Anderson gives us a great action/adventure with a bit of romance. We revisit Alex and Mallory as they prepare for their wedding. But like everything else in life things come up and Alex has to go help a client. After searching for 4 years for her child Jane gets a lead and begs (tries to blackmail) Alex to help. And we all know leads can be time sensitive. Alex worries he will not make it back for the ceremony, but everyone pitches in to make sure he does. They really have some great friends in high places! I loved that she brought in characters from the past books its really like visiting old friends. Great story! Nice job on the narration!

Alex Parker and Agent Mallory Rooney are finally getting their day, when Alex is contacted by an old acquaintance. He is asked to help Jane Sanders retrieve her daughter from her husband, who absconded with her four years ago. Alex is reluctant to say yes until Mallory pushes him forward. As an expectant mother, she cannot begin to fathom what Jane is going through. So Alex sets off to bring the girl home. However, nothing is ever easy. When Alex locates the girl, he also finds out there is an arms deal going down and he has the opportunity to take down the whole operation. Bringing in several colleagues, Alex takes on an old enemy.

If you've been waiting for Alex and Mallory's wedding, you will not be disappointed!

My first read from author Toni Anderson was amazing! A fun romantic suspense equally balanced between romance & suspense. I've owned a number of her books for a few years now & never got around to reading them, my loss. It won't be long before there's another read and review for the first book in this series. Thank goodness this audiobook enticed me into reading it. The narrator did a wonderful job.

A Cold Dark Promise: Cold Justice , Book 9 by Toni Anderson, narrated by Eric G. Dove is everything I expected and more! It is a fairly short listen, so take some time for yourself, sit back, relax, and enjoy this one. The writing is excellent, the storyline is engaging, and the narration is great.

Those of you who have been loyal fans of the Cold Justice series are probably going to think I'm a bit crazy...please don't judge me. :-) This is the 1st book I have listened to in this series. Yes, I know it is Book 9, and yes, I knew that when I downloaded it. But, life is crazy and I'm impatient, so I jumped to the end. I have read a couple of the earlier books, but so much time has passed that I really felt like a newbie to the series all over again. Why am I saying this? Because....even though I haven't followed these characters throughout, I still loved it! If you are new to the series and are looking for a short listen in this genre, I recommend A Cold Dark Promise because it can be considered a stand-alone novel, too, in my opinion. Because of the outstanding writing by Toni Anderson I was easily able to follow the storyline without any confusion. I plan to read/listen to many more of her books in the near future!

The narration by Eric G. Dove was solid and strong. I really don't know why, but I'm not a huge fan of male narrators. However, in this series, it obviously works best. As I got more into the story, I was thankful for his consistent tone, articulation, volume, and speed. He brought the characters to life and made me feel like I was there with them, watching the events unfold. When I finished the book, I even sampled some of his other work and added a few to my wish list! Thank you for a providing a positive listening experience...great job!

Whether you are a die-hard fan of the series or a new, and very late, joiner like myself, I am confident you will agree with my 5/5 ratings across the board. You are going to love it! Now, please excuse me.....I'm headed to download Book 1...the entire Cold Justice series is calling my name.

Thank you for reading my review. I hope it was helpful. :-)