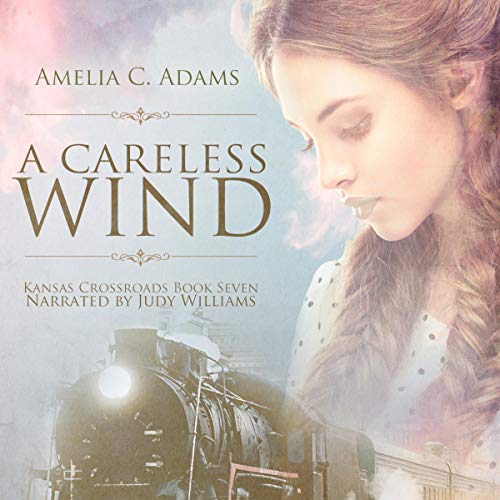 When Rachel's fiance was killed in a railroad accident, leaving her with nowhere to go, she came to the Brody Hotel as a last resort. With the help of her new friends, she found comfort and healing, and now she believes herself as content as she can be. But when Nicholas Hardy, her fiance's brother, walks into her dining room, her world falls out from under her. Everything she thought she believed about herself, and him, is called into question.

Nicholas wanted a life of adventure with the girl of his dreams by his side, but the death of his brother cast a pall on everything he'd hoped for. When he sees Rachel again, he thinks life has given him a second chance, but then an injury threatens to take everything away from him again.

Two souls looking for a place to call home...and wondering if just by chance, they can find that home together.

This is a fun series - it's sort of like the old "Little House on the Prairie" TV show but in a Harvey Girls kind of setting. So there are regular characters, but each installment can stand alone. In this episode, Rachel was finally getting past her fiancé's death, only to have his brother & sister show up at the Brody Hotel. We learn things from their history together, & her life gets a lot more complicated. It's a 2nd chance romance that also deals with catching a thief, prejudice against the Chinese, emotional abuse, and drug addiction. At the end, Rachel has to make a new choice, but will she let fear & guilt decide for her again? This wasn't the best in the series, but it succeeded as a pleasant diversion while I spent the day taxiing my kids all over town *Clean romance level: sweet kisses [The narrator's voice is pleasant but the characters' voices are so exuberantly depicted that they sound unnaturally exaggerated. It would actually be a perfect style for reading children's books, but in adult books, it misses the subtler & more subdued emotions. Mousy and shy characters disappear in the enthusiasm & nuanced emotions are lost. I hate to criticize because she sounds like a really upbeat, happy kind of person to be around, it's just that's not most of these story characters.]

I loved this fun and engaging story. The characters felt authentic and had great chemistry. The narrator was great and added to the story.

This story was fun and easy to listen to, with enough details and events to keep my interest. I have listened to several books with this particular narrator, and I have to say she's not my favorite. She does very good voices without going over the top, and I love that. However, I find that when she reads the narration parts of the story she tends to sound like she's trying to read verse, and pauses in strange places. It doesn't always flow very well for me. But I feel that is a minor setback to an otherwise great experience.

Amelia C. Adams is a new author to me. This is book 7 in a series of 15 books. It was a nice story and covered a lot of topics ( be it briefly). The Chinese working on the railroad, opium abuse, parent - child miscommunication... It all tied well into the story. A sweet love story to top it off. Not sure if I could get into reading all 15 + books. But I would try a few of them. As far as the narrator. She was good at all the different characters voices

Enjoyable story of second chances in this sweet and clean book. Nice storyline and characters were realistic. I’ll read more in this series.

Not my cup of tea.

I couldn’t get into the story but perhaps, it’s the era. Just not my cup of tea! It was okay for me.

A great story about learning to trust in love

Rachel fell in love with Nicholas years before, but his wanderlust cavalier ways frightened her. So she pushed him away and accepted suit of his brother. When he died, and Nicholas found Rachel again, things looked like they would work out. Then tragedy struck again. Nicholas was severely injured and Rachel found herself doubting her heart. When Nicholas receives an unexpected offer, Rachel has to decide if she truly can trust Nicholas and her own heart. This series of books are a wonderful world that captures the Mid American life in the late 1800's beautifully. Each story stands alone with characters you have come to love throughout the series.

I thought this is great story

When Rachel comes face to face with Nicolas, her dead fiancé's brother, she has to come to terms with her feelings for him. After he left to find a job, she thought that problem was over. When he is injured on the job, he returns to the Brody Hotel to recuperate. Now she must deal with her feelings. Nick becomes addicted to laudanum. Can they over come their problems and be together? This reading is worth your time.

Great clean series. Rachel had a hard time dealing with guilt, when her fiance was killed. She had to realize her still deserved happiness.

I will not summarize this story because it was already given in the description of this book. The purpose of this review was to give potential readers information to make an informed decision about reading/listening to this book. This book can be read by itself, but you get the most out of this book by reading the other books before it. What I liked: • Rachel and Nicholas were characters that you wanted to discover more about as you listened to this story. • The minor players in the story added depth to the storyline. • The descriptions of locations and emotions were well done, easy to visualize, and to feel. • The pacing of the story was neither too slow nor too fast. • There was a smooth, coherent flow to this book. • This story had a satisfying ending. • The narrator did an excellent job in differentiating the various characters' voices. She had a pleasant voice. I was given a free audiobook by the author. My review was voluntary and my opinions were my own. I will be listening to or reading more books by this author.