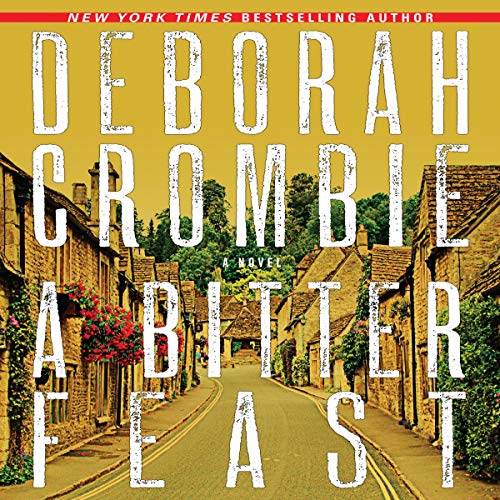 New York Times best-selling author Deborah Crombie returns with a mesmerizing entry in her “excellent” (Miami Herald) series, in which Scotland Yard detectives Duncan Kincaid and Gemma James are pulled into a dangerous web of secrets, lies, and murder buried beneath the surface of a picturesque Cotswolds village.

Scotland Yard Detective Superintendent Duncan Kincaid and his wife, Detective Inspector Gemma James, have been invited for a relaxing weekend in the tranquil Cotswolds, one of Britain’s most beautiful and historic regions, famous for its rolling hills, sheep-strewn green meadows, golden cottages, and timeless villages that retain the spirit of old England.

Duncan, Gemma, and their children are guests at Beck House, the country estate belonging to the family of Melody Talbot, Gemma’s trusted detective sergeant. No ordinary farmers, the Talbots are wealthy and prominent with ties to Britain’s most powerful and influential. A centerpiece of this glorious fall getaway is a posh charity luncheon catered by up-and-coming chef Viv Holland. After more than a decade in London, Viv has returned to her native Glouscestershire, making a name for herself with her innovative, mouthwatering use of the local bounty. Attended by several dozen of the area’s well-to-do, as well as national food bloggers and restaurant critics, the event could make Viv a star.

But a tragic car accident followed by a series of mysterious deaths could ruin her ascent. Each piece of information that surfaces makes it clear that the killer had a connection with Viv’s pub - and perhaps with Beck House itself.

Does the truth lie in the past? Or is it more immediate, woven into the tangled relationships and bitter resentments swirling among the staff at Beck House and at Viv’s pub? Or is it even more personal, entwined with secrets hidden by Viv, her business partner Bea Abbot, and Viv’s 11-year-old daughter, Grace?

Further revelations rock the Talbots’ estate and pull Duncan and Gemma and their colleagues into the investigation. With so much at stake both personally and professionally, especially for Melody Talbot, finding the killer becomes one of the team’s most crucial cases.

Another outstanding book from Deborah Crombie

And not to be slighted, another outstanding narration by Gerard Doyle. His voicing and accents are excellent for each of the characters. When he voiced the Irish chef Fergus, he gave exactly the Irish lilt---especially with "darlin'"--- as only the Irish can say it.

One aspect I like about all of Crombie's books is that Jemma, Duncan, and their children and friends are basically very nice people. Even the villains have redeeming qualities. Also, I appreciate that there isn't a lot of brutal violence.

This book is the most recent in the series. I have read them all and now await the next, hopefully sometime next year.

Crombie keeps getting better and better. This book is, by far, her very best. The characters come to life. The reader can see them as vividly real. The story is intricate and comes to an unexpected end. I wished that the book would go on forever but, since that can't be, I'll look forward to Crombie's next. May it be soon!

Deborah Crombie's writing is at the top of the heap. Why is that not better known? Books 1-4 were good. Book 5 soared to a new level which has been generally maintained . The characters and storylines pull you in for a memorable journey.

Could not stop listening. I’ve enjoyed this series and it just keeps getting better. Excellent narration by one of my favorite narrators
Gerard Doyle.

I loved the Kinkade family and read all the books in the past. This time it felt that the author was trying hard to create a book. Too much food descriptions to my taste.

Excellent Entry in the Series

My favorite entries in this series take place when Duncan and Jemma are visiting an area outside of London, In this story they are in the Cotswolds.
The author is excellent at describing the locations and the people involved. There are plenty of plot twists.
This is a very entertaining and interesting story.

I love all her books but, Perhaps because I am a former chef I loved this one the best. The characters jumped off the page for me on this one!
I hope there’s another coming out!
Thank you Deborah Crombie for engaging my husband and I in your storytelling!

It’s been a while since I’ve listened to one of Deborah Crombie’s mysteries and this new story is a welcome addition to the series. A weekend away for Duncan and Gemma visiting Melanie’s wealthy family turns into a accident and then a murder. The restaurant theme involves delicious descriptions of food that makes the story even more enjoyable. It’s great to watch the characters mature. If you like the series you’ll enjoy this newest tale.

Worst book of the series

I have listened to each book in this series to date. All of the characters are well developed and so relatable. I become immersed in each story with it's twists and turns in the vivid backdrop of each location. always leaving me lookung forward to the next one.