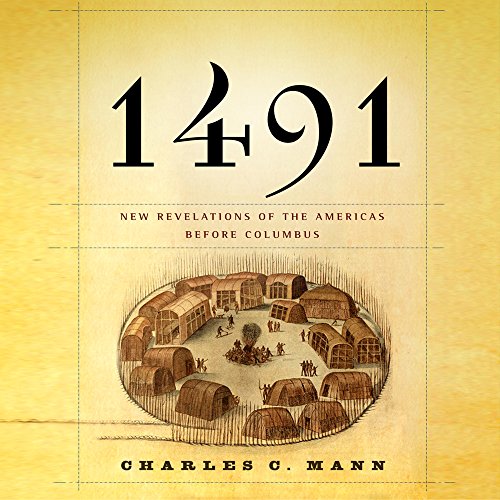 A groundbreaking study that radically alters our understanding of the Americas before the arrival of the Europeans in 1492.

Traditionally, Americans learned in school that the ancestors of the people who inhabited the Western Hemisphere at the time of Columbus' landing had crossed the Bering Strait 12,000 years ago; existed mainly in small nomadic bands; and lived so lightly on the land that the Americas were, for all practical purposes, still a vast wilderness. But as Charles C. Mann now makes clear, archaeologists and anthropologists have spent the last 30 years proving these and many other long-held assumptions wrong.

In a book that startles and persuades, Mann reveals how a new generation of researchers equipped with novel scientific techniques came to previously unheard-of conclusions. Among them:

Mann sheds clarifying light on the methods used to arrive at these new visions of the pre-Columbian Americas and how they have affected our understanding of our history and our thinking about the environment. His book is an exciting and learned account of scientific inquiry and revelation.

"In the tradition of Jared Diamond and John McPhee, a transforming new vision of pre-Columbian America." (Richard Rhodes)
"Every American knows it was a vast new world that Columbus found in 1492, and most imagine it was a thinly peopled paradise of plants, animals, and hunter-gatherers waiting for civilization. The reality, Charles C. Mann tells us in his startling new book about the world before Columbus, is very different - two continents teeming with languages, cultures, and mighty cities as big, as rich, and even more populous than the capitals of Europe." (Tom Powers)
"Charles C. Mann takes us into a complex, fascinating, and unknown world, that of the Indians who lived in this hemisphere before Columbus. He gently demolishes entrenched myths, with impressive scholarship, and with an elegance of style which that makes his book a pleasure to read as well as a marvelous education." (Howard Zinn)

Overall this book is full of interesting ideas and great insights into what often never makes jt into history books or the histories we have been taught.
However, I found the narration to be far too slow and inappropriate delays and interpretations of commas and sentence structure made listening difficult and sometimes unpleasant.

Obviously extensively researched and told from as disinterested observer and not falling prey to temptation to editorialize these lives and cultures. The author takes obvious pains to not apply 21st century values and project them into what is already a deeply fascinating story on its own.
The actor was polished and clearly enunciated even difficult native names and places. Overall an excellent choice of narrator.

This book contains many interesting facts and theories, but it is written in a very journalistic, anecdotal style that lacks structure. The narrator is barely adequate, suffering from pacing, intonation and emphasis lapses, as if he’s reading the material for the first time. He is also somewhat monotone, never changing his affect. For a better presentation of much of the same material, I highly recommend Ancient Civilizations of North America, by Prof. Edwin Barnhart of The Great Courses, available on Audible.

This was not really worth a 4, but it got extra points for interesting things to think about, even if not all were well supported. Despite the title, this is not a picture of the Americas in 1491, instead it looks at history in the Americas prior (and shortly after) 1491. It is less focused than I like in a history and a lot of the science quoted it disputed at best, but nevertheless were interesting (and offbeat). The author has a clear point of view, and does not always analyze evidence objectively. So take almost everything presented within with a grain (or more) of salt.

Nevertheless I recommend reading this, as the author, although bias, wears his bias on his sleeve, and presents the materials as alternative ideas to consider (and may become fully accepted in the future).

I was dubious about some of the archaeological dates and analysis but I enjoyed thinking about many of the ideas presented. Particularly interesting was the possibility that some of the key features of US democracy and egalitarianism was based upon northeastern early America traditions and that US Northern anti-slavery and Southern pro-slavery might be related to the slavery beliefs of the early Americans in each area.

I found the narration excellent, clear, light and expressive and it did well with the many complex names.

Not enough history or historical evidence

Mann makes both large, bold assertions about how "historians" are wrong about pre-Columbian societies in Americas and some smaller ideas as well. I found in general there just wasn't enough "meat" for me as to what it was really like. Instead, he focuses on disproving a lot of existing theories. Which might have been great if I already had a strong background in the material but I didn't.

When he does get into detail it's way down in the weeds. I don't know why this book did not resonate with me, I had in fact planned to get 1492, but just found it so difficult to stay engaged or to care or to even understand the point he was trying to make half the time. There were too many personal anecdotes early on, too much fighting the power in the middle, and too much piece by piece detail of leaders later on that never really clued me in to what these societies were really like. It just felt really tough to pull out more than a thesis from the book. I am generally a big fan of non-fiction, but this one didn't work for me.

Mann does a reasonably good job of impartiality sumarizing the scholarship in this field. Very interesting book made much more difficult to understand by the very poor prosody and enunciation of the narrator.

I haven't listened to any of his other performances, but I will say that his pronunciation on the majority of the names of people, groups, and place names was really bad. I don't expect perfect pronunciation, but if someone who had no background in any of the subject matter tried to hold a conversation using what they heard on this, someone familiar with the material might not even understand what they were referring to.

A fascinating book. I thought I knew all about pre Colombian America in grad school, but Mann presents recent research that flies in the face of conventional assumptions. The narrator, however, seems not to understand what he is reading, and distractingly mispronounces a great many foreign words.

I am only a half hour into this book and I am already turned off by the narrator's sing-song voice. Dennis is more appropriate to a young adult novel than a semi-scholarly book.

Though the author occasionally bogs down in detail (especially early in the book), there is a wealth of exciting information here. The simplistic Noble Savage ideas of our textbooks are first exploded, then replaced with much richer views. So too, are ideas of “untrammeled wilderness” which were supposedly untouched by the Indians’ miraculously light tread. The remarkable (if rarely remarked heretofore) genius of Native Americans’ management of their social and physical environments is vividly conveyed. Sadly, the reader’s performance is stilted, sounding a little like someone reading to a child and a little like the child himself, awkward with expression, flummoxed by complex sentences, and mystified by phrasing. His reading often detracted from my enjoyment.

well documented review of the latest research and theories on precolumbian America, a fascinating book.