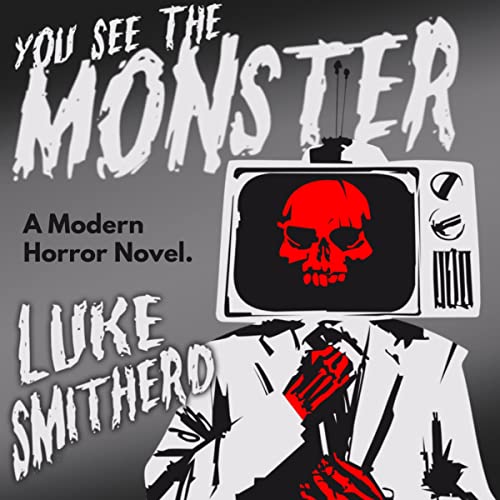 You See the Monster

Guy is about to finish writing his breakthrough online article. He overheard the story by chance in a pub and it’s guaranteed to go viral - all he needs to do is persuade the World’s Unluckiest Man to talk to him. His best friend Larry’s quest for killer clickbait material has led him to a recently appeared shanty town in Glasgow, where he finds some kind of urban voodoo cult. Ex-cop Sam has already come face-to-face with the terrifying force behind both these phenomena, but he’s been trying to put it out of his mind.

When Larry is killed in inexplicably gruesome circumstances, Guy knows he’s also a target. The evidence of malevolent power is suddenly proliferating - but why now? Together, Sam and Guy enter a shadow world of ancient monsters and modern curses, in a battle to figure out the rules of the game and bring them to the light before it’s far too late.

From the best-selling author of the Stone Man series, You See the Monster is for fans of contemporary horror books at their most darkly inventive: a chilling, high-concept fable for our times.

According to Audible, I own around 1000 audiobooks here alone, not counting other retailers. That's not quite as self-indulgent as it looks in print, averaging about 2 books a week over the lifetime of my subscription here. I've listened to a LOT of audiobooks, and it takes something special to surprise me and strike me as new or refreshing.

Listening to so many audiobooks every month, I'm pretty careful what I'll spend my precious credits on. I'll do just about anything else first, from seeking out story-based podcasts instead to weighing the price of the Kindle-plus-audiobook discounted price against the eleven or so dollars of a credit, and paying outright for lots of $2-3 short stories. So when I choose a new author I know nothing about to sacrifice a credit to, it's a carefully-considered decision. I'm rarely as pleased with the outcome of that gamble as I am right now.

Narration first: I've heard better narrators, but mostly I've heard worse ones. When I realized the audiobook was being narrated by the author, I winced; that sometimes turns out well, but not routinely. However, it was less than a chapter before I forgot that this wasn't being read by a professional narrator. Smitherd reads clearly and well. He's no George Guidall, but his voice is pleasant enough; he's no Jim Dale, but I rarely lost track of who was speaking. The narration is solid, and in places it genuinely benefits from being voiced by the person who imagined what certain characters should sound like in the first place. Overall, I think his reading adds value -- that is, I got more enjoyment from hearing him read it than I would have just from reading it myself.

The story itself, however, really shines. I particularly appreciated its self-reinforcing, self-referential nature. Some of the characters are also writers, and they state within the story rules about writing that the narrative itself follows in a delightful kind of meta-recursion. Even better, rules themselves are an important part of the story, so the narrative following the rules stated within adds another level of meta and another level of recursion. The structure is satisfyingly fractal that way. Best yet, this is done in a way that preserves the story's surprises rather than spoiling them. The craft on display here is startling from an author without a single "traditionally published" book (at least, as of the time the "Author's Afterword" to the Kindle version was written).

I haven't said much about the story itself, and that's partly because this one is very hard to describe or even tease without stealing surprises from the reader. For someone who has already read or heard the story, the blurb does describe it, but for most of the book I was baffled why the description included so little of what the book is actually about. Only in hindsight, knowing what to look for, does it seem accurate; the story itself is so very much better than the description led me to expect. I wanted entertaining and hoped for gripping, but what I got was utterly absorbing. Even the title winds up like this; through much of the story, Smitherd seems to be following the principle of referring to the monsters' effect on the characters, while leaving their actual appearance to the reader's/listener's imagination. But by the time the promise that "You See the Monster" is actually fulfilled without question, it hardly matters -- and you're not entirely sure which monster, or how many, or whether you've maybe been seeing them all along.

I'm so excited to discover an author I needn't hesitate about spending credits on, and I hope you won't hesitate, either.

Although I read everything else, too, I have always loved horror and fantasy and this one knocked my socks off! I often listen as I go to sleep and back up later to catch what I might have missed but this one I could not listen to in the dark! There are sections, (many sections!) of this book that turned me into a quaking 12 year old! The monsters are stealthy, horrible and completely nasty and if they were real I would check out fast! This is a modern horror tale that will raise the hairs on the back of your neck and make you jump - I nearly punched my sweet cavalier spaniel when he climbed onto my hip in the bed because I was so engrossed. Highly recommend for horror fans! This is also the best reading by an author that I can remember.

Curse of the Demon

This killer novel gave me visions of the movie Night of the Demon (Curse of the Demon in the US) with a technological twist. Also, a very strong message on modern society's addiction to screens and social media. An added bonus was Luke Smitherd's narration.
I Loved it!

After all the raving reviews I was excited to read this novel. If I were to believe the reviewers this book was not only incredibly special, but super intelligent. I ended up bitterly disappointed, it was neither. The narrative was chaotic and inconsistent. I honestly don’t know what’s so ‘modern’ about it? The monsters really annoyed me. Their metaphysics were all over the place and not well thought out. They kinda felt like the monsters from a shabbier version of a Goosebumps novel. The monsters were so silly, I don’t understand how anyone finds them scary??. I found myself zoning out while listening, because I actually got bored.
The characters are really flat, the story is very superficial and is all over the place. It even swaps between past and present tense all the time. I like the idea that it’s difficult to convince people to believe in something, but it’s such a fleeting idea and the author doesn’t really do anything with that idea. Everything is very passively written. The only character with any depth is the protagonist and he barely makes sense half the time. He’s extremely unlikable and hard to relate to. His conversations are a little childish, and there’s nothing to counter balance his dull perspective. I honestly don’t understand all the positive reviews. I definitely don’t want to read anything else by this author. It’s too Bizarro for me.

I very much enjoy this mans work. It's always very creative and a good time. I think you do an excellent job narrating too. Keep it up Luke. I'll keep buying them. Smitherd's stories are never quite what I expect and pulls me along in whatever direction they're going, like being fairly drunk and led astray by a mischievous yet well intentioned friend.

Best book I've read in a while. I am easily bored with slow pacing, but this book was engaging the whole way through. Loved the way modern technology was seamlessly blended into the occult horror setting. Also, Luke Smitherd does a lovely job with the narration.

As usual Luke Smitherd presents a great story! I am personally a huge fan of his ability to draw the reader/listener into the beauty and so often the horror of real human emotion. His character development is captivating especially as he places them in the most unusual of situations! I do agree with his view on the over use of social media and I appreciate the way he presents it.
Smithereen

Congratulations Mr. Smitherd! You have done it again! I would love to say that this is my favorite book of yours, but I love it just as well as everything else you have written! Your narration is, as always, perfectly done! I have long wondered why your fabulous story The Stone Man hasn’t been made into a movie… and I think this one is absolutely suited for the screen as well! I am thrilled to hear there will be a Stone Man 3 and 4! Now I’m off to read the extra chapter you’ve sent to your followers! Thanks for another Amazing Work!!

Another gem from Smitherd. I can’t get enough of this guy’s books. As always, his creativity (in this case it’s the monsters themselves) is top notch. As always, the characters are relatable and likable (except when we’re supposed to hate them). As always, I had to pause the audiobook several times to think things through for myself… “How would I react if I saw a monster?” / “How would that scene with the YouTube video play out in real life?” / “What is the bigger societal message here?” I just love it when a story can entertain me and get me thinking too.
Well done, sir. Looking forward to the next one.

I really like to story, and for someone reading his own work, he does give a great performance. He is the exception to the “avoid self publishing“ rule.

It’s a shame that we can’t take more chances on self published authors to find gems like this since audible hassles you so much when you try to return something.

It’s a great book, a lot of self-promotion at the end, which I guess he needs to do, but it does nock almost a full hour off of the expected length of the work.
In his case, I’d give it a pass because even his self promotion can be entertaining.