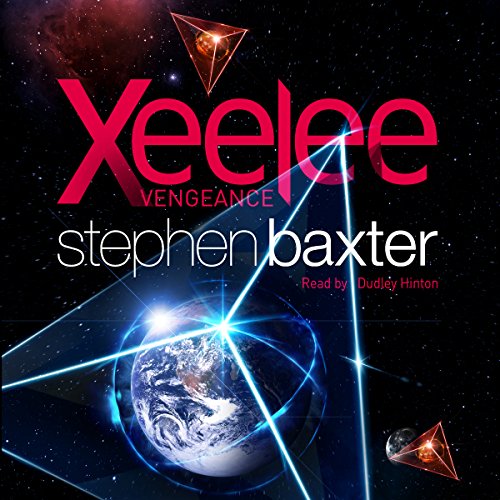 Half a million years in the future, on a dead, war-ravaged world at the centre of the galaxy, there is a mile-high statue of Michael Poole. Poole, born on Earth in the fourth millennium, was one of mankind's most influential heroes. He was not a warrior, not an emperor. He was an engineer, a builder of wormhole transit systems. But Poole's work would ultimately lead to a vast and destructive conflict, a million-year war between humanity and the enigmatic, powerful aliens known as the Xeelee. The Xeelee won, but at a huge cost. And, defeated in a greater war, the Xeelee eventually fled the universe. Most of them. A handful were left behind, equipped with time travel capabilities, their task to tidy up: to reorder history more to the Xeelee's liking. That million-year war with humankind was one blemish. It had to be erased. And in order to do that, a lone Xeelee was sent back in time to remove Michael Poole from history.

I'm a long-time reader of Baxter and I've really enjoyed the Xeelee series. Until now...
I've only returned a couple audible books because they are so awful, This may be added to the list. When you read the description you think -- Wow! Another Xeelee story ... and a whole book! What could go wrong....yet so many things do...

The narration is terrible. As most other reviewers note the pronunciation of Xeelee as "Chee Lee" constantly grates on you. Baxter's somewhat flat characters come to life a bit, but you don't really grow to "like" or admire any of them. In the end, you certainly don't "care" about any of them.

The story itself just drags on and on, brief bursts of action interspersed with Baxter's vision of a post-Anthropocene, interplanetary culture with a side trip to the center of the sun on a what appears to be a sight-seeing trip to stare at Photino Birds (they play no part in the story).

All of the elements you loved in the earlier Baxter stories are there -- There's wormholes, there's enigmatic aliens, there's mind-bending engineering. There's a reference back to Coalescent/Exultant/Transcendent/Resplendent (the Destiny's Children series) by way of a memory of Alia, the girl from the future in Transcendent who, apparently left a lot more information with the Poole family about future history than was revealed in the book itself. Heck, there's even a reference to a "Great Northern" class of interstellar colony ships.

What's not so cool is how this all plays out. The basic premise seems to be that the Xeelee are sore losers and are pissed off about losing the war for Sagittarius A* (the black hole in the middle of our galaxy), None of this is really spelled out, you just need to be familiar with the rest of the Xeelee cannon. So, having lost the war, they decide to send a Xeelee into the past to wipe out Humanity before it develops FTL capability, thus preventing the war which was, at best, a minor inconvenience them.

OK, that's fair. Maybe some Xeelee clerk somewhere needed to fill out a whole bunch of forms about why they lost the war and figured "Hey, why not just send someone into the past to snuff out these apes before they become a problem?", After all, the Xeelee been sending Sugar Cubes full of people and gear back in time to re-engineer their own evolution, so it should be easy. Just fill out a Form 23-b-D ("Request for Preemptory Destruction of a Solar System") tuck it into a Sugar Cube FedEx Previous-Day-Delivery envelope ("We'll get there before you even think of sending it!") and you're done.

In fact, why didn't they think of this before the whole Xeelee war? Then the whole series would have been a two sentence book:

"The Sugar Cube buried under the crust of Mercury woke up just as the first microbes developed in the primordial seas of Earth and executed it's plan-from-the-future to make the Sun supernova. Like Bobby Ewing emerging from the shower in 1986, the future Xeelee breath a minor sigh of relief, an embarrassing minor glitch in their eon-long plan was corrected and they happily proceeded to colonize the Milky Way unimpeded by the pesky Humans-who-never-were,"

But this book needs to take "the long way there" with some really annoying detours.

The idiocy starts almost immediately when, during a test of the new Poole wormhole technology, the Poole's unexpectedly provide a path from the future for a Xeelee Nightfighter to slip through .... because the hole is just big enough you see...prior wormhole tests were on a smaller scale...I guess the Nighfighters are a one-size-fits-all affair....I think it even scratches the paint coming through.

Weren't the Xeelee sending planet-size Sugar Cubes full of gear back in time? Why do you need a Poole Wormhole large enough for a Nightfighter (wings retracted) to time travel? Apparently, there's already a Sugar Cube on Mercury, why wasn't it activated when the Humans were restricted to one planet? There's an implication that it needed someone from Xeelee central with supervisory authority to get it to act (WTH?).....and instead of using whatever time travel magic they used on the Cube, they needed Poole's wormhole for travel (WTH?). And instead of just sending a message back to past-Xeelee Central to whack this minor annoyance of a system before it gets started, they need to wait until Humanity developed a level of technology that might make the task a little challenging. OK, Maybe in addition to being sore losers, they're also that type of hunter who like to mount his rabbits as trophies. Hard to tell.

None of this makes sense,

What also makes no sense is the wonton killing of the Ambassador-to-the-Heat-Sink in the first chapter, Yes, our old friend the Silver Ghost slips through the wormhole in advance of the Nightfighter to warn the Humans, but Harry Poole immediately kills him after he utters one sentence about the statue of Michael Poole at the center of the galaxy and the defat of the Xeelee.. There's some kind of holographic projector device he brings with him, but apparently no one is really interested in what it has to say or why he was trying to give it to Michael Poole. We never do find out what it says and Poole shows an active disinterest in the thing, although he does grab it on his way out of the solar system at the end of the book.

The Nightfighter then proceeds to activate the Mercury Sugar Cube, say "hi" to the Photino Birds, destroy Mars, the Moon and all other inhabited bodies of the Solar system by using a combination of those cherry-red starbreaker beams and nano-machines to grind them to dust. They also try to whack the Earth, but Poole uses a really big wormhole to move it to the "keeper belt" (yeah, another narration annoyance -- it's actually the Kuiper Belt), where a universe-spanning time-travel enabled civilization like the Xeelee will certainly not notice a planet that's been moved out of it's orbit and is radiating heat like crazy.

None of this makes sense.

There's also the "small stuff", like, why, if you can create a virtual person that pretty much clones a real person, you would not use them in place of real people in a combat situation? Hint -- they send real people as pilots instead of easily rewritable machine intelligences. Come to think of it, this piece of technology, not evident in any of the other Xeelee books, pretty much obviates all of the "war series" drama.

No I'm not... there's another book, Xeelee Redemption.

Will that book save this miserable turd of a story by traveling back in time and somehow one-upping the Xeelee plan? I wish I could say I'll never know, but this has been like a train wreck in very slow motion and I just bought the next book to see if it does anything to redeem this one.

Great story. Based in an alternate universe/timeline of the original from Michael Poole's perspective. Great new version of the xeelee sequence (alternate reality).