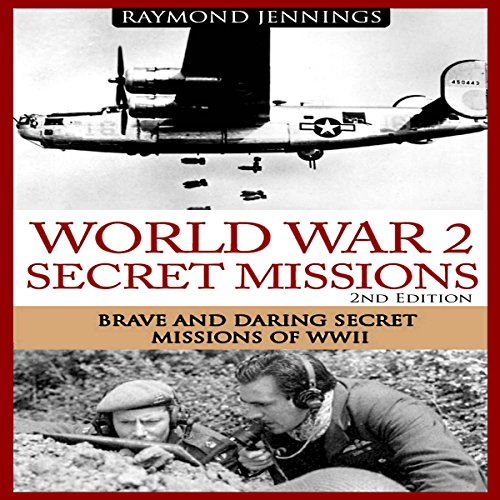 World War II was much more than just a war among several nations. With the war came new forms of warfare, covert missions, special operations, sabotage, destruction, and espionage and so on among the enemies. Spies were employed, plans were formulated, and disguises were put up by both the Axis and the Allies to obtain information or to hinder the progress of the war. This resulted in some of the most unconventional, creative and ingenious operations that played an important role in shaping the course of the war. There were several secret missions and raids that were carried out between the Allies and the Axis powers during the Second World War.

Listed in this book are just few of the several raids and covert missions that the war gave birth to. This book is written in such a way as to give an overview of the few missions. Each chapter throws light on one single mission and gives a broad view to help facilitate the understanding of the listener.

World War 2 Secret Missions: Brave and Daring Secret Missions of WWII teaches you about some of the many raids, operations, and covert missions of this conflict. You'll discover a fascinating world of spies, secret plans, and disguises that both the Allies and the Axis used to gain information and other advantages over each other.

Needs more time in the shop

Felt like a first draft. What’s there has potential, but this shouldn’t have been released in its current state.

I was given this free review copy audiobook at my request and have voluntarily left this review. This review is for the audio copy of World War 2 Secret Missions Brave & Daring Secret Missions of WW2 by Raymond Jennings and narrated by C.J. McAllister. I really enjoyed these stories. It is a great collection of little known missions carried out by the greatest generation. The narration was on par for the stories. I highly recommend this for WWII history buffs.

This book is full of great information!

I found this book World War II: The History and Legacy of the War’s Most Daring Secret Missions to be quite interesting. The book primarily discussed American and British covert operations but it also discussed some of Germany’s covert activities.

This book details a significant!

This book details a significant part of WWII history. However, I would have liked hearing about more of the covert operations and their specific details. This book is a good overview. Very well-explained.

C.J. McAllister did a good job narrating this book, sounds engaged and knowledgeable.

I received this audio-book free for an honest review by the author, narrator, or publisher. Thank you!!!

If you found this review helpful would you please take a moment to click yes below, thanks!

Fascinating info but could've used more in depth detail. Several of the stories left me wanting more details. Fun to learn the secret plots that were carried out or were considered. Definitely a fun topic. Short but good.

As things become declassified and history becomes more clear, reading becomes even more interesting. This book reveals numerous missions previously kept secret by both axis and allies. For me the most fascinating was the mission to destabilize the allies through counterfeiting. Absolutely fascinating. For me the plus is when I can stump my father who got His degree as a history professor. Truly a fascinating listen. I was voluntarily provided this free review copy audiobook by the author, narrator, or publisher.

Short overviews of lots of operations

The book covers a lot of ground, but only as a primer to whet your appetite. In the space of 4 hours the book covers about 25 World War II operations, with most of the chapters being between 5 and 15 minutes long, although there is a couple of 3 minute chapters and one 30 minute chapter. The missions are often impressive, surprising and ingenious

In each chapter Raymond Jennings sets up the background, the people involved, the actions and the consequences. It is a lot of information for such small chapters, thus the level of details is rather brief.

The single 30 minute chapter stands out somewhat awkwardly from the rest of the book due to the size and levels of details provided. There is much more information here and it's good to see, it just doesn't feel like it fits with the rest of the book.

The writing itself is not overly memorable. It is mostly short sentences, almost to the point of just being dot point overviews. Occasionally it goes into longer sentences and descriptions but usually it is short quick ones that provide the information without any flourish.

If you are looking for in depth details and discussion on the missions then this book is not the one you are looking for. But what it may do is introduce to you some operations and missions you have not previously heard of and gives you enough information to pique your interest to go searching for a more in depth book on the topic. A list of further reading would be wonderful for a book like this, but sadly is not included.

Narration by C.J. McAllister is fine work, considering the bare bone sentences he worked with. He is clear and well paced, easy to understand. There is no where in the book for a narrator to really 'stretch their legs' and show what they can do. It's mostly a report style of information, with no characters and little authorial input and opinion to shape the reading. The short quick sentences means that McAllister comes across as stopping short in places, but I feel this was the writing and not the narration.