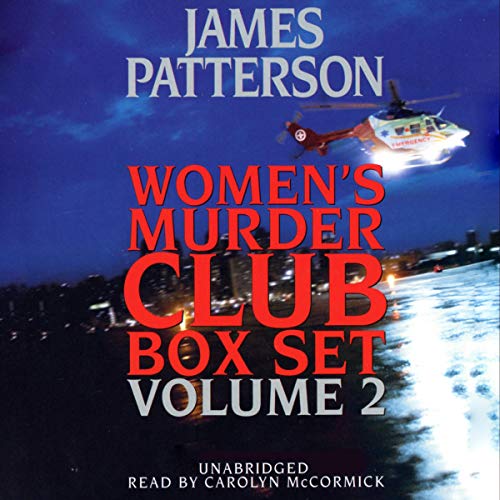 The Fourth of July

In a late-night showdown after a near-fatal chase, San Francisco police lieutenant Lindsay Boxer has to make an instantaneous decision - and sets off a chain of events that leaves a police force disgraced and an entire city divided. As summer comes into full swing, Lindsay and her friends in the Women's Murder Club battle for her life on two fronts: before a judge an jury as her trial comes to a climax, and facing unknown adversaries who will do anything to keep her from the truth.

It is a wild race against time as Lieutenant Lindsay Boxer and the newest member of the Women's Murder Club, attorney Yuki Castellano, lead an investigation into a string of mysterious patient deaths and reveal a hospital administration determined to shield its reputation at all costs. While the hospital wages an explosive court battle that grips the entire nation, the Women's Murder Club hunts for a merciless killer among its esteemed medical staff.

While Assistant District Attorney Yuki Castellano prepares to prosecute the toughest trial of her life, the city is in the grip of a chilling crime spree. Children of well-to-do families are being abducted. But the kidnappings are followed by devastating silence - no demand for ransom. Working frantically with her new partner, Lindsay Boxer struggles to find the connection that will help them make sense of these horrific crimes.

YOU CAN'T GO WRONG WITH PATTERSON

If you could sum up Women's Murder Club Box Set, Volume 2 in three words, what would they be?

I WAS SUPRISED TO HEAR THE VOICE FROM LAW AND ORDER.
SHE WAS OK. I KEPT SEEING HER IN THAT ROLE AS SHE READ.
I DIDN'T REALLY THINK OF LIKING IT. JUST OK

YES BUT I HAVE LIMITS OF TIME

HE HAS CLOSE TO FORMULA WRITING. HIS WORDING KEEPS YOU ALWAYS WONDERING WHAT'S NEXT.

Three mediocre novels for the price of one

This volume contains three short novels in the Women's Murder Club series (Books 4,5 and 6). The first novel in this group (#4) is good and books five and six are pretty bad. Nevertheless, all three keep you interested and for a long drive, these books are worth considering.

What did you love best about Women's Murder Club Box Set, Volume 2?

I always love the plots of the mysteries and the way he gets into their personalities and is having them grow with each story.

Lysnsey,because she is always acting like such a tough cop but deep down we see her soft side showing more and more.

What does Carolyn McCormick bring to the story that you wouldn’t experience if you just read the book?

Her emphasis on the emotions of the characters she really seems to nail them.

How will the girls catch the bad guy now?The way they always do (Team Work)

I actually started to be a fan by playing womens murder club games and then I started listening to audible books and really enjoy these books!!! Thanks Audible and James Patterson!!!

The suspense was non stop, it kept me glued to the story wondering what was going to happen next. I was on the edge of my seat from start to finish.

One of James Patterson best. I could not put it down. Believe me when I say better than TV. With Audible I felt drawn into and part of the story. I can’t wait for the next Women’s Murder Mystery.

I am really enjoying this series. Nice to be able to take it on the road with me.

this was so good and I'm so glad it was a volume set. that was the best play 3 books for 1 . how can you beat that

Decent for the money but not terrific

Three books, the first I thought was very good and even the second was decent - the trial, developmenet of a new character, etc. The third, book 6th in the series was TERRIBLE. It seemed to me that it was two stories mushed poorly into one book. The ferry shooting and subsequent trila were needless. I found myself fast forwarding through most of those sections. On their own perhaps an interesting story but it felt like it was supposed to become something and didn't. I enjoy mystery and thriller and not so much courtroom dramas. The kidnappings were far more interesting and if that story line hadn't been broken up with the other silliness it would have been better. It's a part of the series so you should read it if you're already 5 in but I'm about to buy the next one and I hope it's better. I hope this doesn't go the way of Alex Cross and get so wrapped up in the personal over developed dramas of the characters that the mystery part falls second.

I didn't realize that these were ABRIDGED versions of the original books and was very disappointed when I found that out. If I had known that ahead of time, I would have waited to get the unabridged versions.

The only thing that I would change would be the narrator. The story is fine, but the narration left much to be desired.

I liked the fact that three books were included for the price of one.

The narrator just didn't have the ability to clearly differentiate her vocal tone between characters. I guess I am spoiled by Susan Eriksen who narrates the J.D. Robb "In Death" series.

Do you think Women's Murder Club Box Set, Volume 2 needs a follow-up book? Why or why not?

There are several more follow up books to this set.