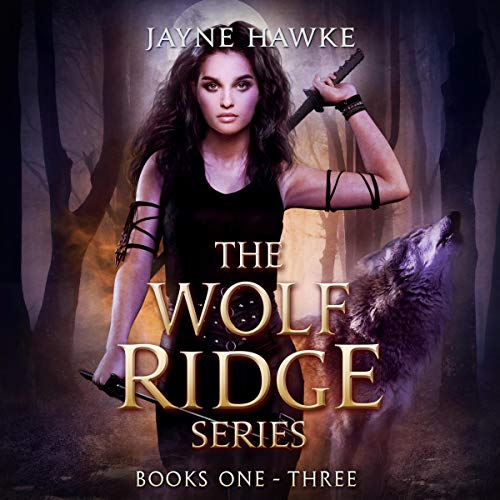 Baker turned werewolf - there's no way this could go wrong.

Follow Rosalyn on a journey from baker, to kickass wolf shifter with the fate of the world in her hands.

Rosalyn Mercier had a clear dream in life - to become a baker for the rich and famous. She spent the first 24 years of her life working towards that. Then she was bitten by a rogue loup garou (that's a wolf shifter to non-supernaturals), and that dream went up in a puff of vanilla-scented smoke.

The council of supernaturals task Rosalyn with tracking down the rogue and bringing them to justice. She's put under the watchful eye of brooding alpha with a dark past, Cole Loxwood. Together they must work to help Rosalyn come to terms with her new life while hunting down the rogue who is leaving a trail of bodies in their wake.

As Rosalyn digs deeper into the identity of the rogue she comes to realize that no one around her is quite what they seem. She's soon left with no idea who she can trust. As the bodies pile up Rosalyn must race to find out who the rogue is before it's too late.

A new guardian's in town and she's ready to kick ass.

Rosalyn's life was finally coming together. She had the beginnings of a pack with Cole, progress was being made on her mission to prove herself to the supernatural community, and there was some hope for a love life blooming with the brooding alpha himself.

For the first time, Rosalyn was really feeling good about her place in the world.

Then it was all torn out from under her.

The blood witches that killed Cole's pack are back, they have Cole firmly in their sights, and they're not the only ones.

A shadow from Cole's past has returned to draw Cole back into old alliances and reignite a flame thought long forgotten. Rosalyn must fight to protect Cole from the blood witches and remind him that his ex is that for a reason.

And that's only the beginning.

No one hurts Rosalyn's pack and lives to talk about it.

Rosalyn and her pack are dragged into a plot to bring about chaos and destruction at the hands of a dark witch. Together they will take on their greatest enemies to date.

It's time to step up as a guardian and show the world what she's really capable of.

This was a very good listen. The narration was excellent and the story moved at a steady pace with plenty of action. I was given this free audiobook copy at my request and have voluntarily left this review.

I was given this free review copy audiobook at my request, and have voluntarily left this review. For the most part life is good, Rosalyn is working to became star baker and doing delivery work to make ends meet. Then she has a run in with a rogue loup garou. Nothing will ever be the same. She's trying to figure things out, including the Alpha wolf that's suppose to help her transition into her new life. Everything she does seems to get her into some type of trouble with the supernatural world. The characters are well written as is the plot. With a perfect balance of suspense, action and humour, added to the enchanting narration, you'll find yourself listening to all three books in the series right away.

This set of books is a great listen with all the intrigue it brings with it. Each book helping to solve issues within them. I loved listening to the series, the author does a great job on the details that need to be told for you to really get drawn into the plot-line without going overly so to put you into a slumber. The narrators are great, they each brought the book to life with their voices and helps you visualize the different characters all the more. I got the audiobook free and am leaving this review with my own personal thoughts of it. I am grateful to have been able to listen to this book series and not have to wait for each book to come out.

I thought it was a great book. Some of it did drag on, mostly in book 2. But honestly if you push through those bits it's worth it.

I have to admit that the first book in this series had my blood pressure going up with the things the main female character did and her inability to recognise who it was that committed the act. I found the next two books a lot better and many things were explained that were hinted at in book one. I loved the narrators, I thought they did an excellent job at bringing the book to life.

"This book was given to me for free at my request and I provided this voluntary review." These books are so different from the “normal” wolf shifter books in a good way!! From the beginning there is a twist with having the fae attacking a human. The growing of the pack has a twist that was not expected and made trying to figure it out on my toes. The addition of the rest of the pack members in book three made it complete. The narration of so many different characters especially by Hannah is great. Her pitch is amazing that goes from deep alto to soprano which have each character their own “persona”. Edward did great with the male voices too. Loved the story and the narration.....can’t wait to listen to another of Jayne’s books!

Wonderful story kept me hooked from the very first scene. I really enjoyed the slow natural growth in primary character's relationships with her friends, pack, and eventual romantic interest. I even appreciated watching the fading of her friendship with her life long friend once differences became too much to overcome. The ending sadly left some unanswered questions that, while not strictly pertinent to the main storyline, would have been nice to have some sort of closure. Both narrators were fantastic! I always appreciate when more than one voice actor is used to help give more "flavor" to the characters.

overall I enjoyed listening to this series and will be looking into more by this author.