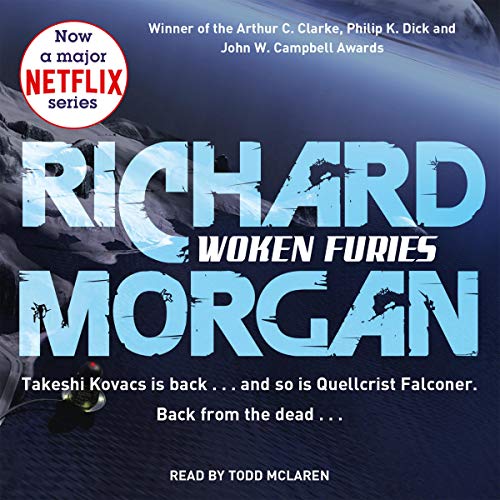 This is high-action, ideas-driven noir SF of the highest order. Morgan has already established himself as an SF author of global significance.

Takeshi Kovacs has come home. Home to Harlan's World. An ocean planet with only 5 percent of its landmass poking above the dangerous and unpredictable seas. Try to get above the weather in anything more sophisticated than a helicopter and the Martian orbital platforms will burn you out of the sky.

And death doesn't just wait for you in the seas and the skies. On land, from the tropical beaches and swamps of Kossuth to the icy, machine-infested wastes of New Hokkaido the hard won gains of the Quellist revolution have been lost. The First Families, the corporations and the Yakuza have a stranglehold on everything.

Embarked on a journey of implacable retribution for a lost love, Kovacs is blown off course and into a maelstrom of political intrigue and technological mystery as the ghosts of Harlan's World and his own violent past rise to claim their due.

Quellcrist Falconer is back from the dead, they say, and hunting her down for the First Families is a savage young Envoy called Kovacs who's been in storage.

Someone who doesn't care about details, background information, setting and didn't listen to the first two audio books.

If you’ve listened to books by Richard Morgan before, how does this one compare?

Bottom of the list. I usually enjoy the audio books of Richard K. Morgan, his fantasy novels as well as his scifi but this one was just awful, especially since I took a liking to the first two.
And what's with the editing? Echo sound effects for flashbacks? Why? I had to check my file at the first scene, just to realize it is edited to sound like this. Why the inconsistencies in a trilogy? Highly unnecessary.

If you can't even get the protagonists name right, you might as well decline the job and choose a different book. The author spent a few lines in his earlier books explaining the pronunciation and origin of his character's name, the narrator just didn't care. The setting of the story has a strong Japanese influence but he couldn't get any of those words right either. Every time the I heard the word yaKUza made me cringe and it didn't stop there. I'm not sure if it was the author's choice to find a new narrator, I really liked Todd McLaren's interpretation of Takeshi and his attitude. Just the right amount of "not giving a fuck", pardon my language. Dufris' character interpretations, especially those of the female characters, all sound cookie-cutter-basic.

If you could play editor, what scene or scenes would you have cut from Woken Furies?

I wouldn't chance it. The author wanted to tell a story, and even though I liked the later parts better, because I had an interest in those plot elements from prior books, the author likes to keep the reader guessing. I'd have liked greater detail regarding the changing environment, since the protagonist had a long and eventful life at this point but we don't read much about the changes in the universe. Altered Carbon still remains my favorite from the trilogy with this one ranking last, even though the plot had me hooked before I even had the chance to pick this book up.

Couldn't get past the first few minutes. The lack of effort put into this audiobook is apparent from the start. I would probably read it instead.

Periodically this audiobook makes use of annoying sound effects on the speakers voice. If you have background noise from sitting in public transport or have a hard time with English because it isn’t your native language I would say you should probably read the book instead. Story is good and fleshes out the universe of Takeshi Kovacs even more but at this point I reckon it’s mostly appealing to fans of the series.

Story average at best, the reading is abysmal

McLaren read the first two of the series splendidly. The narrator should've at least listened to the style - and learned how to pronounce the Name "Kovacs"!!! It's a running joke in the first book that people outside Harlands world cannot pronounce the slavic "tsh" ending - and now the narrating character HIMSELF mispronounces his own name. Pitiful.

Even worse: The stupid cowboy style voice does not fit a self-control master like an envoy AT ALL. Wish I could return this audiobook, it ruins the series for me.

A terrible third part of the series.

Firstly, the story was not up there with the first part of the series.

Secondly and more importantly, the performance, or more accurately the editing was atrocious! Very annoying echo and distortion sound effects.

And lastly, if the author makes a point about the correct pronunciation of the protagonists name in the first book, make sure to let the new narrator know...

Why did they have to use these ANNOYING Effects? Totally spoiled it for me... Flashbacks sound like someone calling you from the bathroom.

Story okay... Not as good as the First one.

Reader no good at all

I cannot listen to this.
The reader is so bad. Pronounces words incorrectly. Drives me insane.

Inconsistent and has no plan or direction.Takashi Feels downgraded and dumber. its The First book I really regret buying in years.

Now that's how this book should be read.

Todd McLaren is back reading the third book. I don't have a grudge against the previous narrator, but what I heard from the sample and read for the the reviews, this book was a hard pass. Switching narrators in books are for many reasons, but I would like to believe it was a scheduling problem that Todd McLaren couldn't read Woken Furies originally. I would like to thank the person or persons who made the re-recording decision.
The book is just as fantastic as Altered Carbon and Broken Angels. Sit back and enjoy listening to Takeshi Kovacs's snark brought to life with Todd McLaren's narration. If you liked the first two books, you will not be disappointed with the third book. Still makes you think about stacks and re-sleeving, life and death. And there is a lot of action and ass kicking.

trying very hard to do little

After a murder mystery and a military drama, Takeshi Kovacs becomes a side character in his own book.

Takeshi spends the book going along with other people's decisions while telling us more than we wanted to ever hear about his past, and Harlan's world.

the book is long, so very long, and filled with details that serve no purpose for the story being told and it's frustrating because there are three stories in there that had the potential to be so much more interesting if each had been given its own book instead of being crammed in a book where they don't help the story at all.

a disapointing end to what the series

The overall continuation of the Takeshi Kovacz story is well written and I enjoyed it a lot. What I did not particularly like is the Hall effect of dream sequences the audio production employs as well as the reader’s complete butchering of the protagonist’s last name, whose proper pronunciation was an important point in the first book.

this time it's a boring, silly, numb, self righteous, sexist and somehow islamophobic book and I tell you why...

1. it's boring because the story doesn't kick off. we left Kovacs in the last novel as a rich man. now he is back on his home world, hired by the jakusa and then he defects and then he joins a posse and then they travel to an island - and so on
2. it's silly because the character is not evolving: it's always Kovacs who is pondering about his traumatic experience as an envoy but we never learn what exactly has happened and he has skills skills that enable him to use his instincts, his reflexes and his rationality to master any situation with care- until he gets tricked or runs berserk
3. it's self righteous because the author styles this character Quellcrist Falconer as someone of extreme wisdom and sophisticated revelations, and boats her "quotes" throughout the books in epitaphs - yet they are just the are rather simple and ordinary: e.g "no one gets what he deserves" ...
4. in this last book, a sect wants women to veil themselves. rather than "inventing a new sect" the author seemingly draws from the current discourse about Islam by using the usual stereotypes. Takashi Kovacs is against this religion, because it suppresses women. but he does it with the usual attitude of cultural superiority ("we don't veil women so we can look down on everything and we don't have to think about own attitude towards women") and at the same time lives out his own sexism: "women should be free so that they can have sex with Kovacs ..."

Takeshi is different here but on his bests nevertheless. The whole story again makes a shift from the previous part but everything holds together and the narrative keeps the listener in anticipation and tension.

Audible... HAVE SOME TECHNICAL MINIMUM STANDARDS

From a technical point of view part one and two were already quite bad. At least the narrator was very good. Just listened to the first minutes of this one:
- They changed the speaker to someone who cannot pronounce the MAIN CHARACTER'S NAME ("Covats?!")!
- They added artificial reverb to an audio book ... why?!?!?
Since I cannot understand a word of what the narrator is saying, I cannot listen to the story.
I will return the audio book immediately. I am very disappointed, since I really wanted to listen to the trilogy's conclusion.

kofax... his name is not kovax... get familiar with the source material first.

also... these sporadic audioeffects such as hall and distortion make listening to this installment a pain... simulated phone-static is ok but obnoxious droning and almost never ending echo during flashbacks & the wailing of the narrator is just too much...

Amazing Story until the last second

I am absolutely thrilled by Richard Morgans trilogy. It is beautiful how subtle he introduces themes into the plot, which are controversy for us today. The future which he paints in the three books is dystopia and utopia at the same time. I do hope, that we will never experience a wildly capitalist society as portrayed in these novels. Apart from these thoughts, I recommend books for an exciting and easy to read adventure!