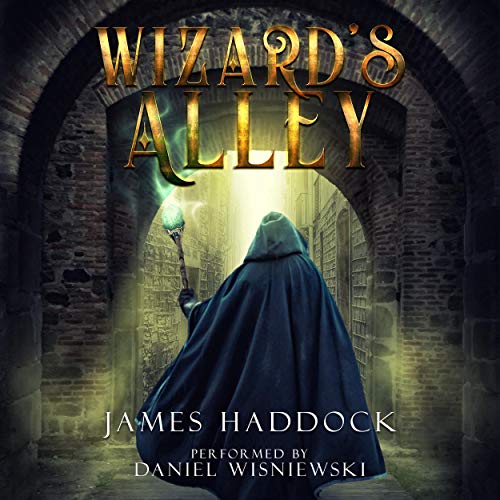 Scraps, a gutter child, is sitting in his hiding place in a back alley, waiting for the cold thunderstorm to pass. Suddenly, lightning strikes in front of him, and then a second time. The two lightning bolts become men — two wizards — one from the Red Order, the other from the Blue.

Rain on his face awakens Scraps. The only thing left of the fighting wizards is a smoking crater and their scattered artifacts. He feels compelled to gather their possessions and hide them and himself. The dispersed items glowed red or blue, and he notices that he now has a magenta aura. Magenta, a combination of both red and blue, but more powerful than either.

Scraps then does what he has done all his life to survive. He hides. And unknowingly, he has become the catalyst for change in the Kingdom.

I almost didn’t get this book because of the reviews bah. I am glad I did!!! Yes the main character moves quick to power so what. I have over 1400 books in my library and can say that this book cuts out the manusia of other books, that take several books to get to the point this one got to quickly.
Looking forward to the next book!
Daniel’s narration of this book is spot on! Highly recommend Battleborne he narrates too!

Everything I love in a Book

OP MC, quick story progression, great magic use and I like all of the focused characters. This is my only review of 272 Audio books and that is because it has become my favorite. I am at two listen through's and might do a third shortly.

MC is automatically in God-mode within 1st 2 minutes.
Magic system is non-existent, MC just wants it to happen then it happens.
Beyond that there is no overarching goal or purpose.

I'm surprised by how little I enjoyed the power trip. Normally I'm impatient for MC to get cool powers n do stuff, but in this book I realized half the fun is the journey getting to that higher level. Besides that, like I said the magic system doesn't give readers anything to sink their teeth into.

Without a doubt, the main character was a completely overpowered Mary Sue. Throughout the book's entirety, there was no struggle this character could not overcome, no one who could challenge him, and nothing he could not create. However, the wizard did have a noticeable weakness, and the author liked to repeatedly mention it as if hinting that it would be vital to the story later on... IT WAS NOT!!!
The last 45-minutes were the most exciting and riveting moments of the book, yet they were all told from the Queen's perspective, unlike the rest of the novel, all being from the Wizard's. After finishing the book, I felt that the entire story would have been far more captivating if the author had the Queen as the main protagonist and had the god/wizard as a supporting character. I did find it hard to keep track of how much time had passed in the story since it moves at an extremely swift pace, and I'm still unsure if the book's time span was 10-years or 20-years. I was not overly thrilled by the novel's cliffhanger ending. Despite my nitpicking, I did enjoy quite a few portions of the story, which is why I'll be listening to the sequel whenever it comes out. Still, I couldn't quite understand how inheriting the power of two conflicting mages would essentially make him a demigod, capable of destroying countless wizards in a single fight and toppling entire nations with no effort whatsoever!

The story had potential but after getting most of the way through I gave up on the this. M.c. should just be called a demi god not a wizard and it just seems like the author was just jumping from point to point to push the story forward way to fast.

What is the point?

puzzling audio book. I saw other reviews criticizing the overpowered mc. I actually usually don't mind that but in this book the mc gets hit by lightning and then can basically do anything ( teleport, fly, create cities in an hour). there is no magic system at all. the story meanders around with seemingly no point. I actually finished the whole book because I was so confused about where it was going but ultimately it goes no where lol. save the credit.

I got this book because of the narrator and fell in love with the story. Thank you both for this lovely story and I can't wait for the next one.

The worst book I've ever read and I own 400+ books

Stop the degradation of the literary arts.

This is quite possibly the worst book I have ever read or listened to. Please do not buy it and further promote the tolerance of such poor writing. This book is more like a very very rough draft of a story and should never have been published in such a state. The characters are all flat and completely devoid of life and the main character is simultaneously the all-powerful God king of the universe and a childish bully.

If your into a MC who is overpowered and doesn’t put up with bullies/thugs, be they noble or street gangster, then this one is for you.

The narrator did a great job and I enjoyed the story. Only issue I had was the kinda cliff hanger ending. Won’t get into that but now having to wait for the next book is going to suck.

If I had to compare it I would say it was similar to “Legend if the Arch Magus” but without the rebirth into another body thing.