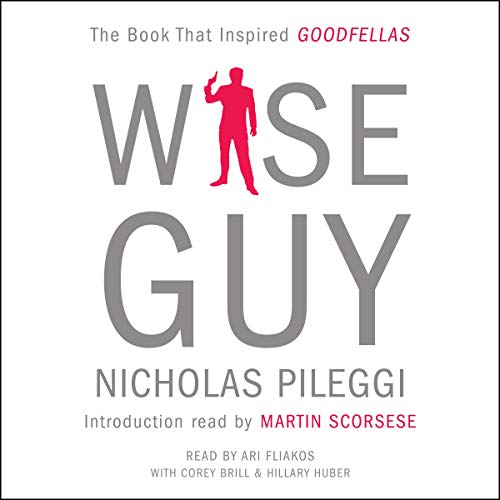 INCLUDES AN INTRODUCTION WRITTEN AND READ BY MARTIN SCORSESE!

Nicholas Pileggi's vivid, unvarnished, journalistic chronicle of the life of Henry Hill - the working-class Brooklyn kid who knew from age twelve that "to be a wiseguy was to own the world," who grew up to live the highs and lows of the mafia gangster's life - has been hailed as "the best book ever written on organized crime" (Cosmopolitan).

This is the true crime best seller that was the basis for Martin Scorsese's film masterpiece GoodFellas, which brought to life the violence, the excess, the families, the wives and girlfriends, the drugs, the payoffs, the paybacks, the jail time, and the Feds...with Henry Hill's crackling narration drawn straight out of Wiseguy and overseeing all the unforgettable action.

Listen to it and experience the secret life inside the mob - from one who's lived it.

It's the full book, not the edited down version Audible previously released.

Loved it! My all time favorite movie and the book dug even deeper. Great way to listen and enjoy the book. All that read were fantastic.

I have been a fan of the movie Goodfellas for years. When it came to purchasing this book I asked myself if I would learn additional information or is this just the movie word for word. I am glad that I purchased this. As a mob enthusiast there is a bunch of information that I had not known. If you have seen the movie you can still enjoy this book.

This is a “must hear”

This is by far one of the best audible books I’ve ever listened to - I couldn’t “put it down”. Highly recommend.

highly recommended this book. If you love the movie then you will absolutely love this book.

I feel I'm in the minority who doesn't like the film, I love the mob/mafia genera, and when I found out that it was a book before a film, I knew I wouldn't be able to stop listening. Everything was done so well, you feel like you're right next to Henry as he tells his story. I would definitely recommend to anyone.

Loved the story, anecdotes, and the narrators vlice fit the Accent i imagine of a wiseguy narrarating a life of crime.

Felt like I was actually listening to Henry Hill tell his story! Very well written as well.

I recently finished watching the movie Goodfellas and became hooked. I later found out it was based on this book and became persistent on finishing the book in one day.

Great book to listen to. Plays out a lot like the movie. Some added information that gives you more insight to the man. I will repeat this book later down the road just like I do the movie