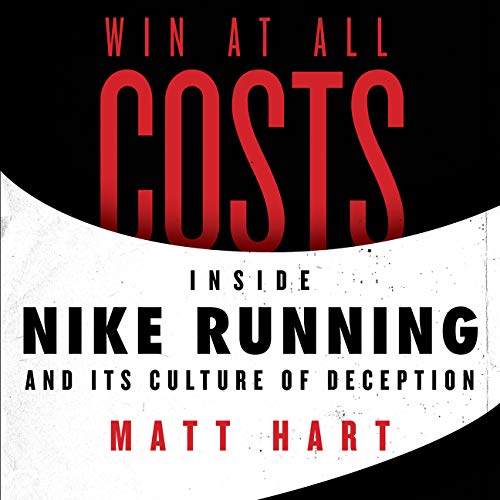 Win at All Costs

"After years of rumors and speculation, Matt Hart sets out to peel back the layers of secrecy that protected the most powerful coach in running. What he finds will leave you indignant - and wondering whether anything in the high-stakes world of Olympic sport has truly changed." (Alex Hutchinson, New York Times best-selling author of Endure)

Game of Shadows meets Shoe Dog in this explosive behind-the-scenes look that reveals for the first time the unsettling details of Nike's secret running program - the Nike Oregon Project.

In May 2017, journalist Matt Hart received a USB drive containing a single file - a 4.7-megabyte PDF named "Tic Toc, Tic Toc....". He quickly realized he was in possession of a stolen report prepared a year earlier by the United States Anti-Doping Agency (USADA) for the Texas Medical Board, part of an investigation into legendary running coach Alberto Salazar, a Houston-based endocrinologist named Dr. Jeffrey Brown, and cheating by Nike-sponsored runners, including some of the world’s best athletes.

The information Hart received was part of an unfolding story of deception that began when Steve Magness, an assistant to Salazar, broke the omertà - the Mafia-like code of silence about performance-enhancing drugs among those involved - and alerted the USADA. He was soon followed by Olympians Adam and Kara Goucher who risked their careers to become whistleblowers on their former Nike running family in Beaverton, Oregon.

As a runner and fan of the sport, I have been aware of most of the content in this book. But it’s always shocking to hear the in-depth details that went on behind the scenes. Matt Hart does a great job setting the stage and giving all the background info to help explain this complicated story.

But for the narrator - DUDE! Learn how to pronounce names before you record this book. Bernard Lagat is not hard, neither is Sifan Hassan.

You'll likely like this book if you're a running junkie and are alright with learning about how the biggest running brand is corrupt.