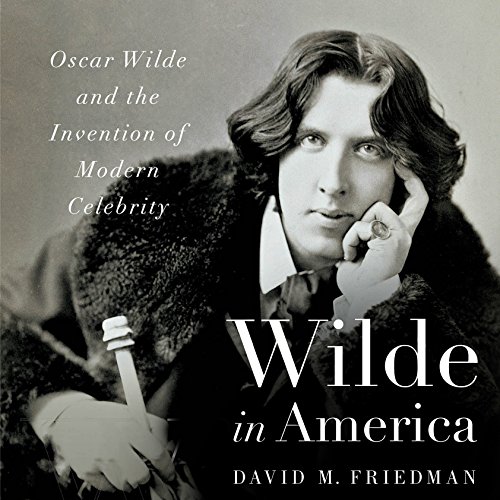 The story of Oscar Wilde's landmark 1882 American tour explains how this quotable literary eminence became famous for being famous. On January 3, 1882, Oscar Wilde, a 27-year-old "genius" - at least by his own reckoning - arrived in New York. The Dublin-born Oxford man had made such a spectacle of himself in London with his eccentric fashion sense, acerbic wit, and extravagant passion for art and home design that Gilbert & Sullivan wrote an operetta lampooning him. He was hired to go to America to promote that work by presenting lectures on interior decorating. But Wilde had his own business plan. He would go to promote himself. And he did, traveling some 15,000 miles and visiting 150 American cities as he created a template for fame creation that still works today. Though Wilde was only the author of a self-published book of poems and an unproduced play, he presented himself as a "star", taking the stage in satin breeches and a velvet coat with lace trim as he sang the praises of sconces and embroidered pillows - and himself. What Wilde so presciently understood is that fame could launch a career as well as cap one.

David M. Friedman's lively and often hilarious narrative whisks us across 19th-century America, from the mansions of Gilded Age Manhattan to roller-skating rinks in Indiana, from an opium den in San Francisco to the bottom of the Matchless silver mine in Colorado - then the richest on earth - where Wilde dined with twelve gobsmacked miners, later describing their feast to his friends in London as "First course: whiskey. Second course: whiskey. Third course: whiskey". But, as Friedman shows, Wilde was no mere clown; he was a strategist. From his antics in London to his manipulation of the media - Wilde gave 100 interviews in America, more than anyone else in the world in 1882 - he designed every move to increase his renown. There had been famous people before him, but Wilde was the first to become famous for being famous.

What made the experience of listening to Wilde in America the most enjoyable?

I loved getting to see how Wilde behaved in America - his reactions, his weekly routines.

One of the most interesting threads throughout the story Wilde's photo-shoot in New York with Napoleon Sarony. I like the history of how those photos were misused and because of early copyright laws.

Not a fan of Friedmans' assumptions at the end of the book concerning Wilde's demise. It is one of my pet-peeves when critics try to pretend that they have a perfect understanding of Wilde's motives to take legal action against Queensburry.
It was a good read though. Loads of work went into researching

A wonderful portrayal of the inimitable Oscar Wilde woth a foxus on his travels in America. Great performance by the narrator.

The story made some good points about celebrity, though Wilde really wasn't sui generis. The narrator's affectations were over the top, and while perfectly understandable given the subject matter, that gets very tiring to listen to for several hours.