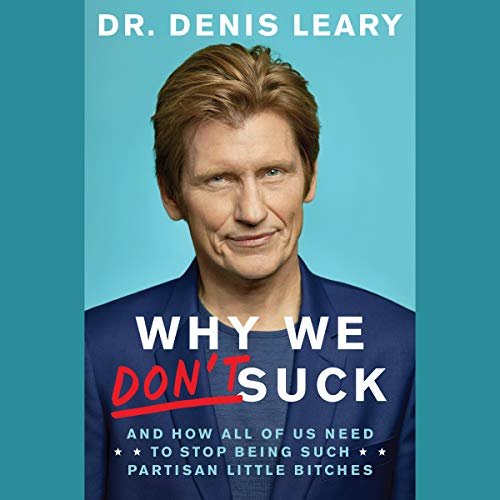 Why We Don't Suck

Why We Don't Suck

From the author of the best-selling Why We Suck comes a searing comic look at these divisive times, skewering liberals and conservatives alike with a signature dose of sarcasm and common sense.

Denis Leary refutes the current highly partisan Right Wing Nutjob versus Left Wing Snowflake approach to American politics - where you're either one or the other, with no gray areas in between. Leading a new protest movement called Gray Lives Matter, he takes equal opportunity aim at the screaming heads we see arguing every night on CNN (the Clinton News Network) and Fox's Fair and Balanced Republican Report. With a devoted mission to Make America Laugh Again, Denis tackles the topics we all hold close to our American hearts: Twitter, Instagram, and the seemingly endless search for fame and diet vodka.

He'll answer such burning questions as: When will Hillary run out of pantsuits? And why wasn't her campaign motto "Hey America - It's My F**king Turn!"? As Denis says in the book, "Trump's election gave me faith that even I could be president. Look at his track record: canceled TV show, thin skin, angry tweets, and an attractive wife. According to that formula, I'm one bad comb-over away from living in the White House." We're all in this together, and Denis Leary is here to remind us what makes America number seven on the list of Best Countries to Live In - which may sound bad but means at least we still make the playoffs.

Includes a PDF of Map and Tweets from the Book

Why you should read ?

A follow up to why we suck. Denis Leary makes some valid points pointing out the flaws of both political parties. Funny, blunt, and sometimes heartfelt as he discusses the selflessness of his friends and family in the hardships that stuck American soil. He talks about his charity, people he’s met, and times he’s been mistakenly called Willem Dafoe (and or) Kevin Bacon. It’s great really and an equal offender. Enjoy

SO GOOD I LOVED IT

Wow I love this book so much it’s just so funny and straight forward I love all of his funny story’s and life advice.

I find myself getting harder and harder to please when it comes to comedy the older I get. Denis Leary has never had a problem making me laugh. I heard him announce the book a week or so ago on the Stern show and decided to give this and "Why We Suck" a listen. He's unapologetic and addresses everyone in the room, no one escapes his list and while I sat there nodding and listening I thought of a few friends and family members of mine that needed to hear this gold. It's life advice, it's hopefully a wakeup call for some of you, with a little biography shuffled in there were moments where I had to pull over I was laughing so hard. We may or may not suck but God dammit hearing Denis narrate his own book is a treasure I will come back to again.

Ok book with a somewhat misleading title because he does lean more to the left which is fine but I am a middle of the road and expected to hear critique for both sides of the political spectrum. He slams conservatives and praises liberals for the most part.
I went through it as always, with am open mind and as always, I am dis-swayed by partisan commentaries from whatever side it may be. If you want to get the jist of the entire book you can listen to the Howard Stern interview which highlights all of the story points that make it somewhat interesting.

Funny but can’t stay on topic

The book starts great and the political humor is amazing. Then at some point it turns into story telling and name dropping. Still funny but no connection to why America doesn’t suck or today’s political climate. Weak attempt at the end to bring it together. Worth your time for some laughs but title is misleading.

loved this so much!

Thank you for narrating your own book, no one could have done it better . I love everything you do

His first book was really good, this one is all out amazing! The Leary sense of humor never gets old, great stories with famous people and trashing a lot of idiots and idiotic things. I listened to this whole thing from beginning to end with no breaks. Buy this audiobook!!

this follow-up to why we suck is funny and will keep you laughing throughout. Not for those allergic to humor.

Dennis Leary at his best definitely a great listen he pulls no punches, some of the best story telling

I have always enjoyed Denis Leary on TV (even as early as Remote Control) to his work with Pixar and his series Rescue Me.

I just couldn't get into this book.