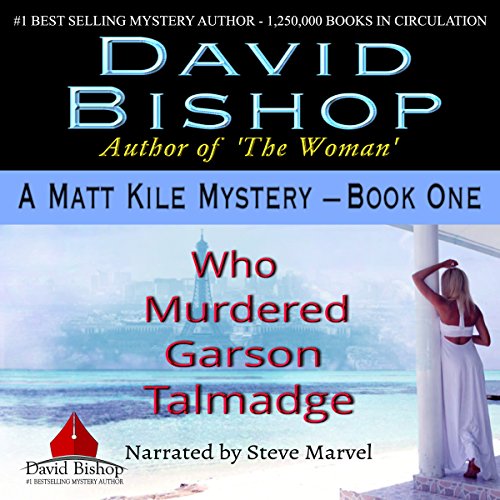 Matt Kile, ex-cop and ex-con, current smart-aleck, and a neighbor of Mr. and Mrs. Talmadge has built himself a comfortable career writing mysteries. Garson Talmadge sold weapons to Saddam Hussein, then moved out of France, came to America, and married Clarice, a woman half his age. When Clarice is arrested for murdering her husband, Matt becomes the investigator for her defense attorney, and quickly learns there is a line of suspects stretching from the US into Europe and the Middle East.

Not long after getting involved in the case, Matt learns that Garson Talmadge's weapons deals meant the FBI had an interest as well as the French Prefecture of Police. While Matt is simply trying to establish that Clarice is innocent, the FBI is trying to learn how Hussein got some of his weaponry, and powerful members of the French government and armaments industry wants to keep Matt from following the trail far enough to expose them.

Told in the first person, Matt shares his thoughts and wise remarks as he weaves his way through a mass of plot twists and turns to its conclusion, and learns who murdered Garson Talmadge.

A Voice for Matt Kile

Steve Marvel is Matt Kile. The voice fits the character as he tells the story complete with accents appropriate to the various characters of the story.

It took a bit for me to get into the rhythm of this book but once I did I enjoyed it. The first three chapters of the next book were read after this one completed. It sounded like it would be better than the first book. I'm disappointed that the Audible book is not available. I hope the rest of the series will be in Audible soon!