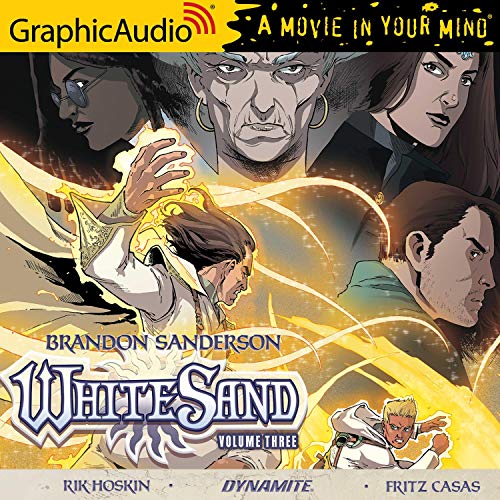 Underpowered and overwhelmed, Kenton tries to hold the Sand Masters together as forces political and personal conspire against them.

Now, in one final push, Kenton must tap the most dangerous depths of his own abilities to combat the enemies within his own guild and discover the truth behind the ambush that killed his father and almost destroyed the Sand Masters for good.

not a bad story but not really a full book

i enjoyed the book overall but parts were predictable. On top of that, it blows my mind how much repeating of the storyline happens in these books. White Sands is a good story but i will not be buying another "graphic audio" book.... nowhere near worth the 3 credits.

The effects are super distracting, the voice actors display breaks in character, just overall something I would never choose to listen to if there was a option to listen to the default version of the book, good story but a horrible audio book

I'll definitely be trying out some other graphic audio series. it brought the books to Life

Amazing Concept, will buy more, but...

The sounds are WAY too loud. They are overwhelmingly loud. I want to love this. The actors are a little cheesy at times but solid overall. The concept of transitions and movie sfx is fantastic. But my goodness, I need to be able to hear what is being said. If I can’t clearly hear the voices then I’m missing the story. It’s like I’m blind. Please make some serious adjustments to your levels, and then I’ll be able to recommend this incredible content to everyone!

Read all of Sanderson's book... But not this one

Hard to finish
Really not on par with his other works... Certainly not worth 3 credits.

Great story performance and narration. 10/10
Not much pointless fluff. Exciting the whole time I listened. Very much enjoyed listening while I cleaned.

This is one of the best Sanderson novels in a while. I hope it's made into a movie or series.