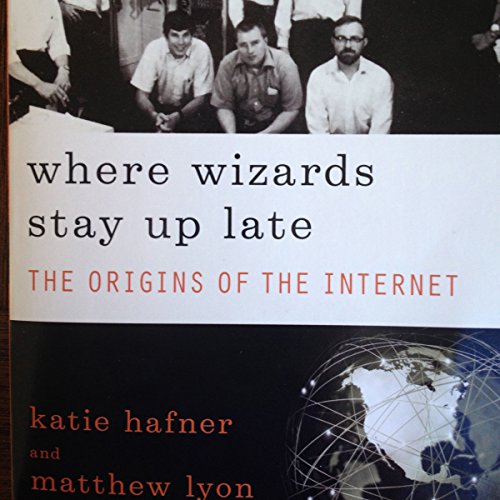 Where Wizards Stay Up Late

Twenty-five years ago, it didn't exist. Today, 20 million people worldwide are surfing the Net. Where Wizards Stay Up Late is the exciting story of the pioneers responsible for creating the most talked about, most influential, and most far-reaching communications breakthrough since the invention of the telephone.

In the 1960s, when computers where regarded as mere giant calculators, J.C.R. Licklider at MIT saw them as the ultimate communications devices. With Defense Department funds, he and a band of visionary computer whizzes began work on a nationwide, interlocking network of computers. Taking listeners behind the scenes, Where Wizards Stay Up Late captures the hard work, genius, and happy accidents of their daring, stunningly successful venture.

Not only a gripping read, but beautifully researched, and organized. Having lived through most of the advances covered in this book, I still learned a lot. I don't see this often enough where the authors covered the why of each advance and the missteps, rather than simply reporting the technical milestones. I've listened to this book three times so far.

Love From a Techie

This book will appeal to technically versed people who are interested not only in the history of the internet but also in the inner-workings of networks and how the various protocols of the internet (TCP, TCP/IP, FTP, SMTP, etc) came into existence.

Soundtrack to a coma.

Compared to a few other computer-history books I've bought recently, Especially Hackers by Steven Levy, and When Computing Got Personal by Matthew Nicholson, this book reads like an extended Wikipedia page. Extraordinarily lifeless and flat.

I work in the computer field and I stuggled with this book. It's like a long memo.

Get your geek on with this deep look at the origins of what is now the Internet. If you what to examine networking history, is a great audiobook. Loved it!

Would you consider the audio edition of Where Wizards Stay Up Late to be better than the print version?

Not with this narrator

He has a monotone voice and almost no vocal range. It's like listening to my accountant uncle read a book I really want to read for myself.

If you ever wanted to learn about the founding fathers of the internet and where there ideas actually came from this is as good as it gets. The authors also do a remarkable job of explaining the technical details in a way very easy for layman like myself to understand. Nelson's narration is overall great too. Recommended!

The book goes deep on the early days, but not so much on the resulting internet. I was expecting a little more.

a great telling of the history of the Internet and the background of packet switching, TCP/IP, telnet, ftp, and the fantastic vision that created a world changing technology.