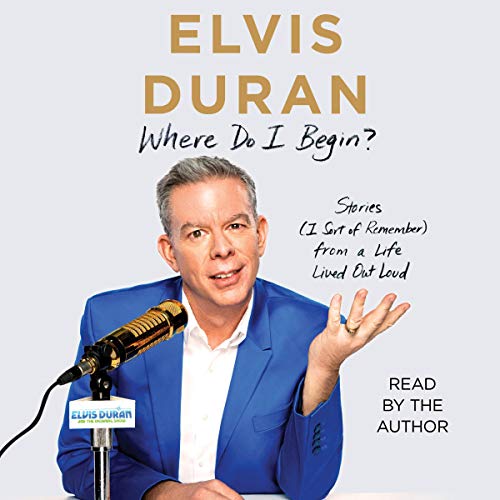 Where Do I Begin?

Where Do I Begin?

Elvis Duran, host of one of the nation’s top morning shows and the voice millions of Americans wake up to, shares his wildest stories and hardest learned lessons all with his trademark heart and honesty and plenty of humor.

Elvis Duran’s nationally syndicated radio program, Elvis Duran and the Morning Show, is America’s most listened-to Top 40 morning show and one of the 10 most listened-to programs in all of radio, heard live by nearly 10 million people every morning.

But his success didn’t happen overnight. Elvis spent years navigating the wild world of radio as a DJ for hire, working (and partying) in markets around the country before taking over the morning shift at the legendary Z100 in 1996. Over the last 20 years, he has become one of New York City’s signature voices (Variety calls him “a permanent fixture of the area’s daily commutes”) thanks to his show’s exciting mix of music, new artist discovery, interviews, gossip, and live listener interaction.

Along the way, Elvis has become known not just for his incisive interviews (and occasional feuds) with pop music’s biggest stars but for the show’s commitment to kindness and positivity and Elvis’ own candor and openness with his audience.

Bold, funny, and totally candid, Where Do I Begin? is sure to be loved by anyone who listens to Elvis live every morning - or anyone who wants to know what really goes on behind the scenes of the pop music machine. It sounds like an old friend telling a new story you’ve been dying to hear.

Ce que les auditeurs disent de Where Do I Begin?

Im a huge Elvis fan! I listen to his show every morning! love them all! Anyways his book was i mean alright for a first book. i totally agree with the guy that said it seemed you "skimmed the surface " and " didnt get into as many juicy things as was expected " i felt you held back a little Elvis! Tell us more than just a few things that we dont already know about you. Which i know must be hard living your everyday life outloud. But i know you have the rawness in you my friend!! THROW IT AT US IN YOUR NEXT BOOK! I am a recovering addict and ive been sober for almost 6 years. The last friend I had on this earth just died yesterday of an overdose. Listening to your show every morning makes me feel like I have friends/a family and its a great one!! Yall always get me to start my day off right with smiles and laughter! I now have 2 beautiful children 2 yrs old and 5. I am rebuilding my/our life and have come so so far! Life really is beautiful! Just wish I had someone to share the view with. I hope you read this Elvis and appreciate that I didnt blow smoke up your a**! lbvs Thank you all for being exactly who you are! Keep shining! ☮Peace & Love✌ MiRanda OHara

First audible book and so happy i chose it! Hearing Elvis tell his own story was a true delight! I truly felt like i spent the time talking with my bestie.

Truly an extension of the Elvis Duran that I listen to to every morning. A very lovely compilation of stories and insight from The Godfather of radio.

Since the book has come out I have been meaning to download this app so I can listen while I’m working... well I finally did it and it was an amazing story by an amazing man! I grew up listening to Elvis Duran in the mornings & I still do every day while working. I didn’t want the book to end!

I have been listening to The Elvis Duran Morning Show for years and fell in love with Elvis. Listening to him tell his story was so entertaining, i would find myself taking the long way home just so I could listen for a few more minutes.

I’ve listened to Elvis Duran for many years and really looked forward to hearing his book.. unfortunately was a major disappointment. I actually can’t even give a real solid review because I couldn’t finish it. I just found to too boring to complete. No excitement, bland and boring..

Excellent Book, Thank You Elvis Duran for sharing your life story with us. I wish you the best in your future and hope to read more about it as it happens. Ty

LOVE this book. I have been a huge fan of the show and this book did not disappoint. I enjoyed hearing the very beginnings of Elvis's story. Very powerful.

Probably the best audio book I’ve ever listened to. Whether you’re a fan of Elvis or not, this book will capture and entertain you.

I've been listening to Elvis since I was a teen and now I'm almost 40! I really enjoyed listening to his story. Thanks for making my mornings great! Awesome book!