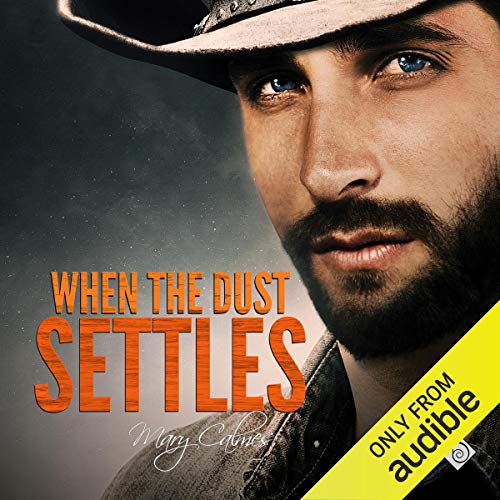 When the Dust Settles

Glenn Holloway's predictable life ended the day he confessed his homosexuality to his family. As if that wasn't enough, he then poured salt in the wound by walking away from the ranch he'd grown up on, to open the restaurant he'd always dreamed of. Without support from his father and brother, and too proud to accept assistance from anyone else, he had to start from scratch. Over time things worked out. Glenn successfully built a strong business, created a new home, and forged a life he could be proud of.

Despite his success, his estrangement from the Holloways is still a sore spot he can't quite heal, and a called-in favor becomes Glenn's worst nightmare. Caught in a promise, Glenn returns to his roots to deal with Rand Holloway and comes face-to-face with Mac Gentry, a man far too appealing for Glenn's own good. It could all lead to disaster - disaster for his tenuous reconnection with his family and for the desire he didn't know he held in his heart.

Told entirely from Glenn's POV, I absolutely love how Mary Calmes writes an alpha, possessive male, without it being overly creepy or hitting my "call the police!" panic vibe. Instead she makes it hot and oh-so-necessary.

I especially love how Sean Crisden is able to voice the characters in this audio so well. I just LOVED his character voices for Glenn and Mac! Hearing their passion come to a head and explode was awesome!

Sure, the relationship is fast, with the two coming together and making promises quickly, but it works. It just all works for me.

The audio is just so good...and just what I needed today.

Sean Crisden is sublime, I loved the story...I am one happy Calmesniac.

Cranky cowboy needs to be roped in.

Would you listen to When the Dust Settles again? Why?

You betcha! I just love the way Sean Crisden brings a sexy, broken down cowboy to life.

Glenn, hands down. There's this venom inside him festering, keeping him away from family and a man that could be everything he needs, and he's too damn stubborn to do something about it. For now...

Which character – as performed by Sean Crisden – was your favorite?

Cranky cowboy needs to be roped in.

Crisden is a great narrator, I don't think I've listened to a book he's read that I didn't enjoy, but he really hits his stride when it comes to Cowboys.

Glenn Holloway has stayed away from his kin for far too long, and though he had good reason years ago, now it's time for him to come back home. And Mac Gentry is going to make sure he not only brings his stubborn self back to the Ranch, he is going to make sure Glenn is sleeping in his bed every night.

If you are a fan of this Author or Narrator then grabbing a copy of this book should be a no brainer. Add to that sexy, stubborn cowboys, a kidnapping scare and some good ole' boy lovin' make this one a must listen.

Get it, keep it and listen more then once

This book just hits the ground running. Its roughly 2 years after the story in book 2. We get to visit with old friends and make some new ones. This is Glenn Holloway's story who we got to know a bit in the 2nd book. This is a wonderful story of life, diversity, family and a new kind of love of those involved in and around the Red Diamond ranch.

Apparently Glenn has been trying to accept his life as a gay man and has had a mini-crush on Mac the right hand man of his cousin/brother Rand. We get our fix of Rand and Stephon and what they have been up to which is always a pleasure.

The only reason this didn't rate 5 stars on the story is because there was no hint in the last book of Glenn or Mac having any interaction, however it's explained well. This is more a love story with maybe a scene or two of hot sex, some suspense but these guys are looking for the real thing no games are played in this story. Always a pleasure with Sean Crisden as narrator. Definitely a keeper and thanks Mary Calmes lets keep this series going.

Loved reading this and loved listening to it just as much! Sean Criseden does an amazing Rand Holloway.

This series is wonderful. I love Rand, Steph and everyone involved. Glenn's and Mac's story is so natural. I love how the family keeps building and bonding. Please keep them coming Ms.. Celeste. I love your work.

I love how Mary writes characters that really need each other. They crave each other. We get our usual marvelous characters, a terrific flowing story, and some first time sexiness with Glenn and Mac/Mclain. I only wished that it was longer.
Highly recommended. ENJOY !

Did not like as much as the previous books

To short and rushed. The story did not tell how Mac and Glenn met or when Rand and Stef got married.

a bit too short , don't know why but not as good as I thought it will be.

I really love this series and all the characters, I hope Mary will write another and put all of the Halloway's in it. I would like to read another with Mae, Charlotte, Ben, Tyler and everyone included in it, it would be the treat of all treats.
For the three books the narration has been wonderful. I recommend this series and all the Calmes books to readers.

Not great literature for the ages. But it's well written, the characters speak to me and the pace is brisk. The balance of personal development is offset with so.e steaming love making and topped with some action. The time just flew by . I hope for more installments of this series!