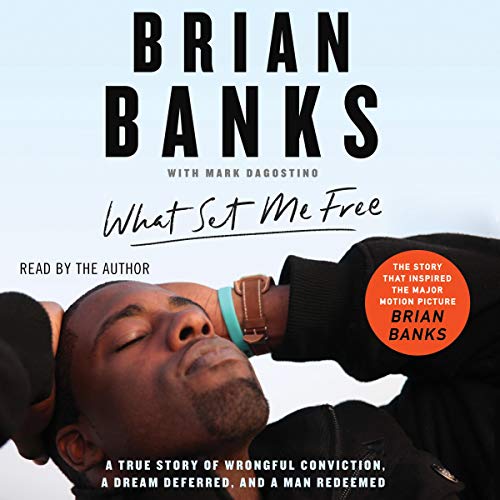 What Set Me Free

*The story that inspired the film Brian Banks*

Discover the unforgettable and inspiring true story of a young man who was wrongfully convicted as a teenager and imprisoned for more than five years, only to emerge with his spirit unbroken and determined to achieve his dream of playing in the NFL.

At age sixteen, Brian Banks was a nationally recruited All-American Football player, ranked eleventh in the nation as a linebacker. Before his 17th birthday, he was in jail, awaiting trial for a heinous crime he did not commit.

Although Brian was innocent, his attorney advised him that as a young black man accused of rape, he stood no chance of winning his case at trial. Especially since he would be tried as an adult. Facing a possible sentence of 41 years to life, Brian agreed to take a plea deal - and a judge sentenced him to six years in prison.

At first, Brian was filled with fear, rage, and anger as he reflected on the direction his life had turned and the unjust system that had imprisoned him. Brian was surrounded by darkness, until he had epiphany that would change his life forever. From that moment on, he made the choice to shed the bitterness and anger he felt, and focus only on the things he had the power to control. He approached his remaining years in prison with a newfound resolve, studying spirituality, improving his social and writing skills, and taking giant leaps on his journey toward enlightenment.

When Brian emerged from prison with five years of parole still in front of him, he was determined to rebuild his life and finally prove his innocence. Three months before his parole was set to expire, armed with a shocking recantation from his accuser and the help of the California Innocence Project, the truth about his unjust incarceration came out and he was exonerated. Finally free, Brian sought to recapture a dream once stripped away: to play for the NFL. And at age twenty-eight, he made that dream come true.

Perfect for fans of Just Mercy, I Beat the Odds, and Infinite Hope, this powerful memoir is a deep dive into the injustices of the American justice system, a soul-stirring celebration of the resilience of the human spirit, and an inspiring call to hold fast to our dreams.

I just saw the movie which was great. It does not do justice to how good this book really is. The detail is fantastic and you get to live this journey with Brian as he did. I found myself extremely mad and happy during this journey. This is a must read book for everybody.

Thank you to Brian Banks for sharing his story of injustice within our supposed justice system. America should not be satisfied with even one innocent person convicted unjustly.

Every person in America who has a relative in America needs to read this book. Because only by the grace of God we have not been caught up in the system. This can happen to anyone especially any minority living in America. This book also gives us hope that even in tribulation there can be a bright side; we cannot be in the situation And see the situation. We must find peace.

Inspiring and enlightening. I loved it. I teared up a few times . The story was very telling of the justice system . A lot of it ,I didn't know about. I know more because of this book and it inspired me learn and do more. Great book!!!

Brian was able to honestly, and vividly, convey this story with humility and grace. It was articulated so well, so engaging, you felt like you were hearing it in person. So heartfelt and proud of this man while at the same time so heartbroken about the injustices that, while not said by brian, the world knows is heavily race related. You’re amazing, Brian, and the world is infinitely better because you’re in it. Much love

Hope, injustice,
This is something you need to listen to.
We need justice system reform.

This book tells such an important story about the failings of our justice system through the words of an innocent man who suffered the worst the system could throw at him and never gave up. It is truly inspirational.

Mr. Banks is an amazing human, this book was addictive. I'm in awe of his ability to maintain emotions and overcome the insanity of it all. I think we all need a Mr. Johnson and a Mr. Banks in life.

A powerful and thought provoking account. Mad me want to dig deeper into our justice system and how to drive some changes.

This is an amazing book of true freedom forgiveness and are just system and how injustices are seen every day. A must-read!

The story of Brians youth is devastating.
The story he made out of what’s been given to him, is one of the most inspiring I’ve ever heard.
Listening to this book, hearing Brians voice as he puts himself back into what he went through made me feel his fears, hopes, sadness, desperation.
He’s true hero- inspiring, full of dreams & willpower to perceive them.
Wishing you and your family the best of lifes! May god bless you and love be pouring on you forever.