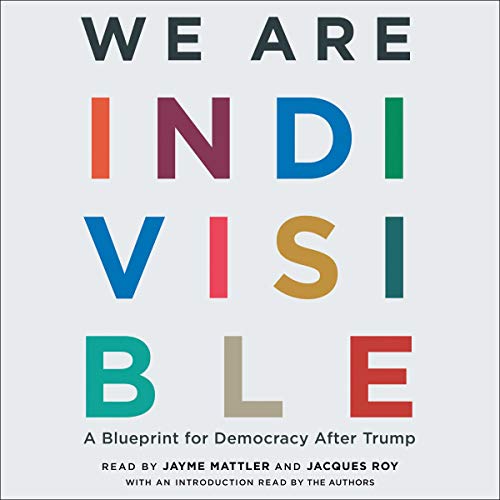 This is a story of democracy under threat. It’s the story of a movement rising up to respond. And it’s a story of what comes next.

Shortly after Trump’s election, two outraged former congressional staffers wrote and posted a tactical guide to resisting the Trump agenda. This Google Doc entitled “Indivisible” was meant to be read by friends and family. No one could have predicted what happened next. It went viral, sparking the creation of thousands of local Indivisible groups in red, blue, and purple states, mobilizing millions of people and evolving into a defining movement of the Trump Era. From crowding town halls to killing TrumpCare to rallying around candidates to build the Blue Wave, Indivisibles powered the fight against Trump - and pushed the limits of what was politically possible.

In We Are Indivisible: A Blueprint for Democracy After Trump, the (still-married!) co-executive directors of Indivisible tell the story of the movement. They offer a behind-the-scenes look at how change comes to Washington, whether Washington wants it or not. And they explain how we’ll win the coming fight for the future of American democracy. We Are Indivisible isn’t a book of platitudes about hope; it’s a steely-eyed guide to people power - how to find it, how to build it, and how to use it to usher in the post-Trump era.

To take our country back from TRump at al, ad nauseum, will take incredibly hard work but it is doable. If we get this popular-vote-loser for another four years that will finish the USA, as well as civilization because of climate breakdown. If you are frightened at that prospect but feeling overwhelmed and do not know what to do about it, I highly recommend reading this book and then getting actively involved. Working with people, working with hope can save our country. (It's also big fun!) And if Trump gets in again, we would be wise to have networks already organized.

A great description about political action in these times

This sets forth an excellent description of developments during the Trump era and suggestions of actions that we might take now and after he is gone.