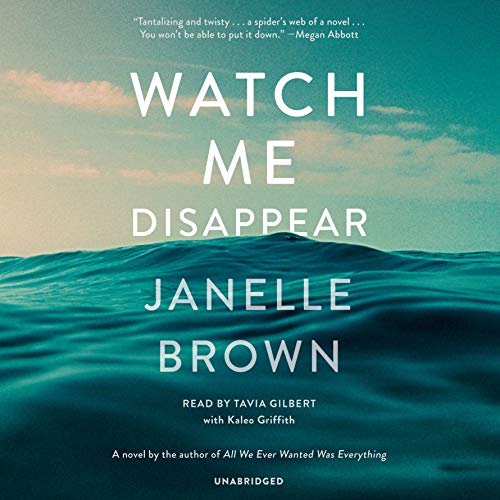 The disappearance of a beautiful, charismatic mother leaves her family to piece together her secrets in this propulsive novel for fans of Big Little Lies — from the best-selling author of All We Ever Wanted Was Everything and the upcoming Pretty Things.

“Watch Me Disappear is just as riveting as Gone Girl.” (San Francisco Chronicle)

Who you want people to be makes you blind to who they really are. It’s been a year since Billie Flanagan — a Berkeley mom with an enviable life — went on a solo hike in Desolation Wilderness and vanished from the trail. Her body was never found, just a shattered cellphone and a solitary hiking boot. Her husband and teenage daughter have been coping with Billie’s death the best they can: Jonathan drinks as he works on a loving memoir about his marriage; Olive grows remote, from both her father and her friends at the all-girls school she attends.

But then Olive starts having strange visions of her mother, still alive. Jonathan worries about Olive’s emotional stability, until he starts unearthing secrets from Billie’s past that bring into question everything he thought he understood about his wife. Who was the woman he knew as Billie Flanagan? Together, Olive and Jonathan embark on a quest for the truth — about Billie, but also about themselves, learning, in the process, about all the ways that love can distort what we choose to see. Janelle Brown’s insights into the dynamics of intimate relationships will make you question the stories you tell yourself about the people you love, while her nervy storytelling will keep you guessing until the very last chapter.

Praise for Watch Me Disappear

“Watch Me Disappear is a surprising and compelling read. Like the best novels, it takes the reader somewhere she wouldn’t otherwise allow herself to go.... It’s strongest in the places that matter most: in the believability of its characters and the irresistibility of its plot.” (Chicago Tribune)

“Janelle Brown’s third family drama delivers an incisive and emotional view of how grief and recovery from loss can seep into each aspect of a person’s life.... Brown imbues realism in each character, whose complicated emotions fuel the suspenseful story.” (Associated Press)

“When a Berkeley mother vanishes and is declared dead, her daughter is convinced she’s alive in Janelle Brown’s thriller, calling to mind Big Little Lies and Gone Girl.” (Variety)

The story is well set but the end predictable. once having finished the book its forgotten. The female narrator speaks most times with high emotions which go on my nerves. The male narrator is better.

I really enjoyed this book!

I read the mixed reviews on this book and thought i would take a chance, I have to say I am really glad I did! I ended up really liking these characters, and i found myself wanting to listen more. Some parts although unrealistic weaved a story of how a you can never really know someone and how some people will only show you parts of themselves. There is no good or bad, just Human imperfection. No spoilers here, but i loved that there was no questions left unanswered in the end ... the author really ties everything up nicely so that there is no guessing. Two thumbs up from me!

Really sucked me in...

I like this author, she is honest and writes from a personal place which brings authenticity to her characters and settings.
First of all this is a unique perspective, like a twist of Rebecca. We care so much about a person whose presence is so powerful and magnetic yet we learn about her fascinating identity in a secondary way. I loved this.

There is something about the people in this book that make you want to keep reading, you fall in love with them Before the story gets really interesting.

So I do tend to try and guess the twist or ending when I'm watching movies or reading and this one was well written. There were several detective moments where I had to piece together the facts and determine red herrings- it was fun.

This was a double dipper for me, I missed the setting and the people. They're well written. Janelle brown is not a fluff writer, she's sophisticated and interesting as are the women she writes about. I wanted more.

The narrator is nice, she does Olive well and has that weird guttural "male" voice but it's ok.

The ending...you're feelings about it will depend on how well rounded the experience of this book will be. I needed some time to think it over, all of it. No spoilers here!

Some people will relate to this story better than others, honestly probably upper mid class women in there 30s/40s and that's okay. Enjoy.

Watch me Throw you Away!

Really? The idea of leaving everything behind is not a romantic notion of escapism but instead a story of abandonment. Life is too short -- skip the book.

This book was so slow and full of inconsequential details! I just kept thinking it would pick up the pace but it never did. Waste of time.

Excellent Story!! Once caught, I couldn't put it down!! Its been a long time since a book has so hijacked my life!!

Didn't like any of the characters. Overly precise diction of the narrator was annoying. The main character was hateful. Yuk.

This story has many twists and turns, a good mystery! The only thing that bothered me as far as the narrator was in the beginning she’s so anxious that she made me anxious. She calmed down after awhile and I was able to relax and enjoy the story.

A bit predictable at times but still a nice summer read. Character were likable and story line good. At times it seemed to drag a little but the twists helped keep it going.

The twists and turns in this book are great, keeps you guessing till literally the very end!!!!! A must read!!!!!

A wonderful debut novel. Can't wait to hear from this author again!--Thanks Janelle!

Slow in the middle but satisfying ending

It's not fast-paced, but all in all an interesting story with a satisfying ending. The narrator was not a little too emotional for my taste but decent.