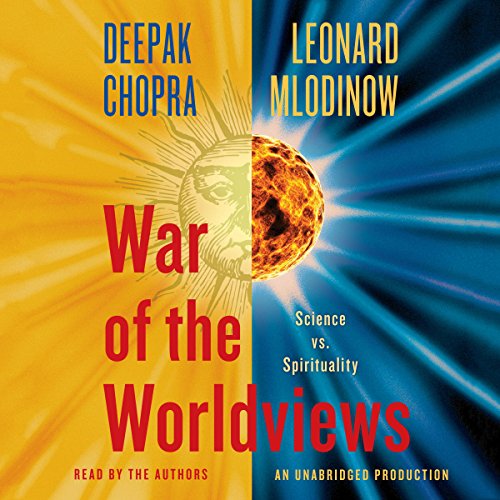 War of the Worldviews

Two best-selling authors first met in a televised Caltech debate on “the future of God,” one an articulate advocate for spirituality, the other a prominent physicist. This remarkable book is the product of that serendipitous encounter and the contentious - but respectful - clash of worldviews that grew along with their friendship.

In War of the Worldviews these two great thinkers battle over the cosmos, evolution and life, the human brain, and God, probing the fundamental questions that define the human experience.

This extraordinary book will fascinate millions of listeners of science and spirituality alike, as well as anyone who has ever asked themselves, What does it mean that I am alive?

From the Hardcover edition.

“We need a worldview grounded in science that does not deny the richness of human nature and the validity of modes of knowing other than the scientific. If we can bring our spirituality, the richness and wholesomeness of our basic human values, to bear upon the course of science in human society, then the different approaches of science and spirituality will contribute together to the betterment of humanity. This book points the way to such a collaborative endeavor.” (His Holiness the Dalai Lama)
"Deepak Chopra did an excellent job explaining why the all-embracing holistic quantum field suggests a dynamic, alive cosmos. This is an interesting and provocative book which will be read and talked about for a long time to come.” (Hans Peter Duerr, Director Emeritus, Max-Planck-Institute for Physics and Astrophysics)
"Bravo! This delightful book is bound to be the Gold Standard by which all other books on science/spirituality will be measured. Bold, refreshing, lucid, and insightful, this thoughtful collection of essays seeks to unveil the mysterious of our very existence. Is there a purpose to the universe? What is our true role in the cosmos? This book dares to ask some of the deepest, most profound questions about our very existence, and comes up with some surprising, even shocking answers." (Michio Kaku Prof. of Theoretical Physics, City Univ. of NY. Author of the New York Times best sellers Physics of the Future, and Physics of the Impossible.)

I'm not sure what I was thinking when I bought this book, maybe a chance to hear some new perspective on big questions.

I left this one feeling disappointed on both sides, Mlodinow for not putting the hammer down harder, and Chopra for dwelling on his straw man arguments and offering up the incessant lists. When Chopra starts on a list, he really loses me, the book is no longer about world view, its a textbook for his brand of snake oil.

Chopra also falls into the trap of arguing against himself repeatedly throughout, using examples that clearly illustrate Leonard's point, then twisting them around to support magical thoughts that are clearly unrelated.

Mlodinow does too much floating around, it seemed like he doesn't want to really tear down Chopra's arguments as directly as Chopra does his. Maybe to keep the book moving along?

Mlodinow often rushes his reading, and Chopra's often wanders into a droning attempt at hypnotism, as far as I can tell.

It's not terrible, it was interesting to hear another point of view from where I stand, I just expected a little more from both sides.

Find somebody else to represent the spiritual world. The views that Chopra presents are so incredibly dull and full of obvious mistakes and arguments that have been torn apart for years by many authors. It is really painful to listen to his chapters. The mix of naivety and just obnoxious ignorance makes it unbearable for any listener. There is nothing interesting or creative that he has to offer just a bunch of irrational opinions backed up by nothing and I wasn't expecting scientific evidence for the spiritual side but at least a coherent in itself logical argument.

Would you be willing to try another book from Leonard Mlodinow and Deepak Chopra ? Why or why not?

I really liked the drunkards walk from L. Mlodinov and I will stay clear of D. Chopra

Be aware of Chopra, half of the book is awful

I saw Leonard Mlodinow's name and expected a book with a content of corresponding quality. I didn't knew who is Deepak Chopra and that was the biggest mistake. The book is more like the conversation of a science advocate with lunatic or deliberate charlatan. So you will find not much of interesting science.

Seems like Mlodinow tryed to adjust for lower standarts in argumentation, so he didn't did his best. Chopra is a mistery for me - he makes so much logical mistakes with such a pathos, that I was forced to skip much of his part eventually. I've honestly tryed to follow his logic, but seems he do not use it at all.

Do not buy this book if you are interesting in:

Buy this book if you are interesting in:

Was War of the Worldviews worth the listening time?

Absolutely worth the listen.

This isnt a book to convince you one way or the other, but to give insight into the opposing views and perhaps to give some understanding about those who do not share your views.

Worth a listen if you can get it on sale

I would get another book from Leonard Mlodinow.

Getting the different views on the same topics.

Do you think War of the Worldviews needs a follow-up book? Why or why not?

Not what I expect- but that's a good thing!

What made the experience of listening to War of the Worldviews the most enjoyable?

Deepak Chopra actually made a good argument for consciousness preceding matter, using Quantum Theory as support. This was unexpected and very welcome to hear because I was assuming that Mlodinow was going to "wipe the floor" with Chopra.

In contrast, I thought that Leonard Mlodinow only had a few good moments. He spent most of his time decrying the notion of a deity, even though Chopra did the exact same thing in his argument. Even more damning was Mlodinow's insistence on experimental proof, except, conveniently, where we are technologically incapable of experimentation in regards to several key concepts in physics.In other words, throw this theory out, but keep this other one, even though neither can be proven and both are accepted by different parts of the scientific community. Overall, Mlodinow only supports a few of his points with evidence. The rest is conjecture.

What was one of the most memorable moments of War of the Worldviews?

When Chopra stated that religion has failed human civilization, and that spirituality requires one to embrace science.

Thought Chopra made an excellent argument, and supported it with sound scientific theories and experimental proof.

Thought Mlodinow could have been much better. One shining moment for him was the chapter about physical human brain function near the end of the book.

The NEW discussion about who we are and where we came from.

This book was much better than I expected it to be. I recommend it to anyone interested in science, spirituality, or both.

The book is curiously entertaining, though Deepak's half is overwhelmingly fallacy-ridden.
But Mlodinow's words make it worth.

Not a typical book

I am glad that such a book exists. Usually one reads about something without direct counter-arguments. This way, although also not ideal, one can see two world views explaining same topics and even addressing each other's arguments.
As both authors are also the narrators, this audiobook is much more valuable for me. None of the narrators is probably the best you can listen to, but this way it is much more enjoyable anyway.

A typical debate between science and psuedoscience

Whom would I recommend this book to?
For spiritually oriented people with an interest in science but not professional scientists, this is a great book. There are a lot of solid arguments from Leonard for spiritualists to keep in mind in their journey on their path. Mainly to watch out for traps of settling in for explanations not for their scientific merit but just because it is consoling. Deepak Chopra passes off as a person with good scientific thinking to someone who isn't a science professional. Leonard explains precisely how Deepak's theories have no scientific basis. If we follow Deepak's basis of inner experience to be the basis of truth, there is no experimental evidence required.

Who could pass this book?
For professional scientists, this book isn't of much learning unless you like the kind of debates such as between Ken Ham and Bill Nye. If you don't like such debates with word-twisting, not adhering to reason-logic-evidence kind of people, you'll have to endure nearly a dozen hours of such a debate. Deepak Chopra explicitly says reason is limited and emphasizes personal inner experience as a path to greater understanding. Deepak is as well read in science, philosophy and poetry as is Kurt Wise(a phd geologist and a young earth creationist). Deepak's consciousness(woo) is untestable speculation that he argues for in this book. He picks up some narratives from science and some favorable research to argue for his viewpoint without addressing the disconfirming evidence. Deepak quotes reputed scientists from yester years to muster some credibility to his arguments. Leonard effectively dismantles those arguments and points to what we know as of today discrediting outdated notions. Leonard correctly represents the humility of science to admit our lack of satisfactory understanding in aspects such as consciousness. Deepak offers his religion-like-simpleton answer. Instead of calling his answer 'God', he uses the word 'consciousness'. The book is already a few years behind and the latest advancements of AI such as beating human player in Go which is a game guided by intuition rather than exhaustive computation as was the chess program that defeated Garry Kasparov. It will be interesting to see Chopra's explanation for where the AI Go player's intuition is coming from. I guess Chopra will move the goal post for the Turing test farther to some other woo target that is uniquely human. On a lighter note, Chopra's thoughts aren't uniquely human and is already automated(Chopra twitter feed generator).
What already scientific minded people can learn though is to see what pointless rambling babble is like and how patient and compassionate is Leonard in communicating with a person like Deepak Chopra."

Unique way to listen in on the debate

I appreciated the fair and respectful structure of the book with each person taking turns and responding to the other without being rude or making personal attacks. Oddly I came to the conclusion that they agree on a lot. I am a scientific minded person but found Deepak's essays compelling. Yet I agreed with Leonard that they are not quite enough. Yet I agree with Deepak that we should hold ourselves to a higher standard and sometimes the "materialistic" view allows us to avoid the hard work of self actualization. So I concluded for myself that we need science to be what it is - and we need humans to want more than what science offers. The debate rages on...in this book respectfully.