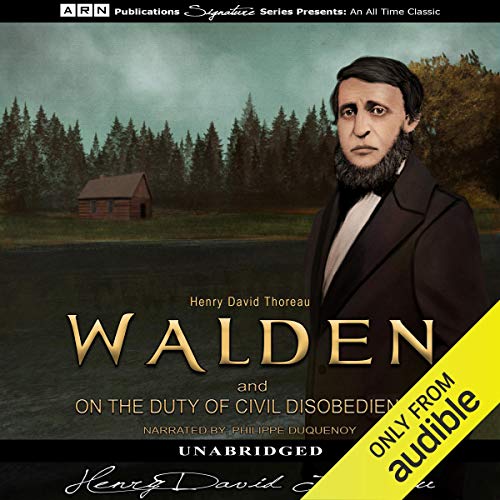 Walden and On the Duty of Civil Disobedience

Walden, by Henry David Thoreau, is a personal narrative about Thoreau's solitary living experience near Walden Pond in Massachusetts. Starting with the building of his cabin by the pond in 1845, Thoreau recounts his experience away from society and city life. Thoreau spends his time growing beans for money while appreciating the beautiful wilderness around him. Although he lives a solitary life for nearly two years, Thoreau explains that he does not feel as isolated as one might think.

He encounters several different animals, and he studies each of them in an effort to gain a deeper understanding of the meaning of life and survival. From the birds that watch him in the trees to the fish in the pond, Thoreau believes that each creature has a lesson to teach. The sound of the train on the tracks near the pond reminds him that society and technology are a stone's throw away, and the noises lead him to contemplate the benefits of living away from the constant pressures of social interactions and expectations. This philosophical narrative includes a sprinkle of humor, but the main focus is on living life to the fullest and on appreciating the world outside material needs.

In the final chapter of this book, you'll find an essay titled "On the Duty of Civil Disobedience", in which Thoreau contends that people should not allow the government to control or limit their principals, and it's an individual's duty to stand up to and not comply with such attempts by the government. Thoreau was mainly inspired to write this piece due to his disgust with slavery and the Mexican-American War.

Walden is Henry David Thoreau’s account of living on Walden Pond in Massachusetts and reflecting on society and city life. Included in this edition is Thoreau’s essay, “On the Duty of Civil Disobedience,” in which Thoreau examines the government, and argues that it is an individual’s duty to challenge the government’s decisions, a very good addition.

In Walden, Thoreau reflects on a solitary life he lived for two years, musing about animals, the plants he grows, and the sound of the train on the tracks. In doing so, Thoreau gained a deeper understanding of life and survival through studying all the nature around him.

In many ways his experiences can translate to peoples lives in today's society. It really gets you thinking about life and makes you think about and examine your own existence as it challenges its readers to challenge social norms. Overall this was a very well read book and great piece to add to your collection.

Last, let me say that the narrator was truly a delight to listen to with his clear articulation and charming British accent. Two thumbs up, and a great addition to anyone's collection!

Would you try another book from Henry David Thoreau and/or Philippe Duquenoy?

The nuggets of incredible insight and humor.

Would you be willing to try another one of Philippe Duquenoy’s performances?

If you could play editor, what scene or scenes would you have cut from Walden and On the Duty of Civil Disobedience?

I think I could have done with slightly less information about the ice on Walden Pond.

This narrator was so terrible, I downloaded and listened to the (free!) Librivox recording of the book, which was read far more ably by its amateur narrator.