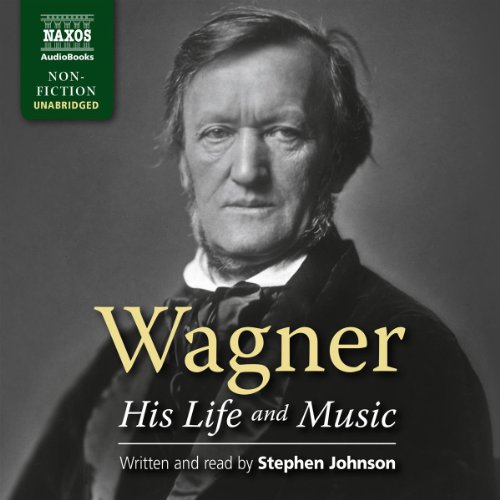 Well over a century after Wagner's death, the man and his music are as controversial as ever. Praised for his profound insights into the workings of the human heart, he has also been condemned as a dangerous libertine, a proto-fascist and an arrogant bore. His vast four-part operatic Ring cycle has been elevated as one of the greatest achievements of western culture and dismissed as an unparalleled example of creative megalomania.

This audiobook makes no attempt to gloss over the darker sides of Wagner's character, personally or artistically, but argues that the finer aspects of his vision transcend its flaws. It tells the story of an extraordinary life and charts Wagner's development, from unpromising beginnings into the creator of some of the most brilliantly innovatory and seductively beautiful music ever composed.

May 22, 2013 marked the 200th anniversary of Richard Wagner's birth. Perhaps not surprisingly, the magazine Der Spiegel ran a cover on its March 30th issue featuring a portrait of Wagner holding a tiny fire-breathing dragon as if it were his pet. The headine: "Das wahnsinnige Genie," or "The Insane Genius." This was visual shorthand for the pop culture view that we already know all there is to know about Wagner, danke schön.

But what do we know, and is it even true?

Often we are reminded Wagner was Hitler's favorite composer, and his music is used as background in TV programs featuring the Third Reich. Many of Hitler's minions did not share his taste for Wagner's operas, but never mind. We are primed to imagine the horrors of that regime set to the work of one composer in particular.

Wagner was not a pleasant man. If you need to love the person to enjoy his work, this isn't the composer for you. But the personality characteristic criticized most often, Wagner's anti-Semitism, is rarely put into the context of his times and the many who sadly shared his views.

On a lighter note, jokes are made about things "Wagnerian," while brides still continue to use the march from Wagner's Lohengrin as they proceed down the aisle, and cartoons feature fat, horn-helmeted women belting out glass-shattering tunes.

So who was this Richard Wagner, and why should anyone care?

Stephen Johnson answers that question admirably and contributes a great deal to the study of classical music in this book. It will reward anyone who is interested in Wagner, of course, but also makes a valuable addition to those starting their discovery of his music.

As Johnson says, "While this book makes no effort to gloss over the less pleasant aspects of Wagner's personality and thinking, its main purpose is to show that what matters most about Wagner's work are the very aspects of his work that make it greater than the man."

Far greater than the man. Listen and see if you don't agree with him.

I am grateful for this work, which is mostly narration but also has musical excerpts. The narration by the author is quite good. It's not clear how rigorous the scholarship that went into writing this work was, but Johnson seems to have fairly solid knowledge. Johnson correctly notes that Wagner was antisemitic, and focuses on that, even finding some sort of fascist tendency in the music itself (not the libretto, but the music, because it is "overly insistent"). Wagner was a German nationalist antisemite and later became a favorite of some Nazis (though it's not clear they cared for Parsifal), but to pin the evil of the Nazis on Wagner, as some authors are wont to do, seems excessive. Johnson provides historical context that is helpful, and the musical excerpts are of excellent sound quality. I have listened to this work more than once, so I definitely do not regret this purchase.