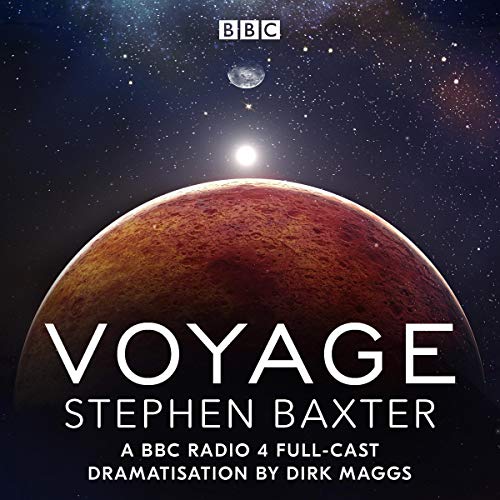 An alternative history of the US space programme, dramatised by Dirk Maggs.

What if John F. Kennedy survived the assassination attempt and developed the space programme?

President Nixon, with the help of former president JFK, has just green-lit NASA’s first manned expedition to Mars. Aboard the expedition is Natalie York, a geologist who risks everything she loves for the chance to go to space; Phil Stone, former X-15 test pilot; and Ralph Gershon, a Vietnam War hero intent on being the first African American to reach another planet.

Exploring mankind’s ambitions in space, Voyage chronicles the incredible story of what could have been.

Also included is an one-hour bonus programme featuring Dirk Maggs in conversation with Stephen Baxter, 20 years after Voyage was recorded. This wonderful, intimate conversation between the two friends is peppered with memories of the recording, the production process, and what inspired Stephen to pen such a well-loved story.