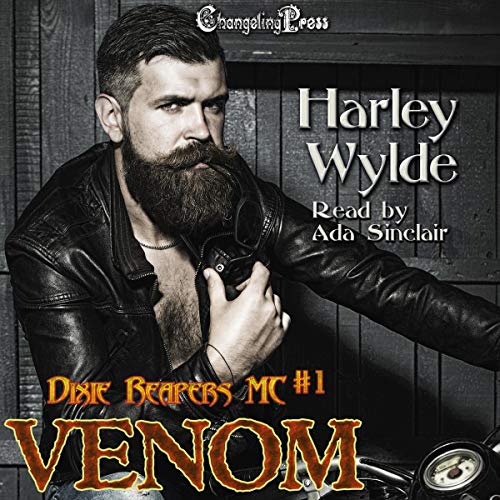 I might live in a mansion in South Florida, but my daddy was a biker, and I was definitely daddy's girl. When I found out my mom and stepdad had something horrible planned for me, I ran. Straight to the Dixie Reapers - the only place I'd ever thought of as home - but it wasn't my daddy's arms I ended up in.

Venom is dark and seductive, the type of man who doesn't take shit from anyone. Despite his hard exterior, being with him makes me feel safe, and his kisses make me ache for so much more.

I've never been with a man before, but even as inexperienced as I am, I know that being with Venom will ruin me for anyone else, and I don't care. I want him - all of him - and damn the consequences.

I hadn't risen to the rank of VP of the Dixie Reapers MC without getting my hands dirty. I'd been deep in blood and dirty money for over 20 years, and could have any pussy I wanted, whenever I wanted, and how the fuck ever I wanted.

But when an angel I hadn't seen in 14 years came back into my life, all it took was one look in her eyes, and I was a goner. As a kid, Ridley had been this little blonde cherub who lit up the place. Now, she's older, has curves in all the right f--king places, and damn if I don't want her.

The fact she was the 19-year-old daughter of a patched member meant I needed to keep my hands to myself, and I might have, if she hadn't begged me so sweetly.

Now, she's mine, and I'll do anything to keep her safe, even if it means starting a war.

I own this book in my kindle addiction, I loved the way this person told the story. I can get enough of these two or this series.

This is my first book that I’ve listened to by this author but I think I’ll be going back and finding more of her books. I really liked Ridley. She may be young but she knew what she wanted. She also didn’t whine. I liked that she stood by Venom and didn’t care what he did or his darkness. The chemistry and passion between Ridley and Venom was clear to see. Overall an exotic story with lots of dirty talking from an alpha hottie. Happy Listing!!!

This is definitely a series I will be continuing.

**I received this audio book in exchange for an honest review.**

I really loved Ada Sinclair's narration of Venom and Ridley's story. Honestly, I've been waiting for their story to come to Audible and now it's here! Woohoo! I can have it forever now! Well done, Ada. I look forward to listening to more of your narrations in the future. As always, well done Harley! You've written such awesome MC books and it started with Venom for me.

I love this book and it was great to listen to it on audio. I loved it and would remit to anyone. The story always has a HEA and an awesome alpha male. I really like how she brings her characters to life and make you fell for them. Another hit and wonderful listen.

Wow! What a fabulous listen. I love the MC genre, and have listened to various authors and can confidently say, Venom delivered. It's wonderfully-written, well-plotted, engaging with characters who fascinated and drew me in further.
Ada Sinclair captured the nuances of the characters' personality and emotions very nicely, bringing the story to life. Venom is a stellar start to the Dixie Reapers MC series, and I can't wait for the rest of the series. I'm definitely recommending this audiobook!

Fabulous audiobook and loved hearing about Venom and his Angel. This author is one of my favorites. I love her writing under Jessica also. Narrator did a fantastic job also on this.

What do you do when you find out your mother and stepdad are sending you into the worst situation that there could ever be? You run as fast as you can to your father, which is exactly what Ridley does. Protected by his motorcycle club, Dixie Reapers, she finds herself in the company of Venom. These two have had a connection since Ridley was little and now when she needs him most, he is there to keep her safe. But what happens when trouble comes to them? This is my first Harley Wylde book, and I love her style. She writes not only steamy stories, with an abundance of chemistry, but she is no nonsense! When it comes to taking care of business, it's done! Loved this story, the slight taboo, and will be watching for the next audio release!

Ada Sinclair nails this narration. She does a fantastic job with the voices, each easy to distinguish. I loved her voice for Venom, a little gritty giving him an edge. She is new to me, and I will be watching for more from her.

Some people would call this a taboo style due to age difference but I don't see it that way. Ridley was put in a horrible situation with a horrible Mom and Stepdad. I could not believe what they did but so glad how things ended up. The love and chemistry between Ridley and Venom was insta and super sweet. Also, there is not many books that doesn't show a manwhore in a club and he was not one plus picky. I really liked this one. Ada Sinclair does a great job.
I was given this free review copy audiobook at my request and have voluntarily left this review.
AudiobookObsession
AudiobooksUnleashed

This is such a great, fast paced, age gap read! I was glued to the pages from start to finish and can't wait to see what's next in this series.
Venom, VP of the Dixie Reapers MC and Ridley, daughter of Bull, has many years between them but none of that seems to matter to either of them. Ridley was only five years old when her mother remarried and moved to Florida with her. Bull was heartbroken and went to visit Ridley as often as possible. But, the little girl grew up and things went sideways real quick when Ridley turned nineteen and found out what her mother and stepfather had planned for her. Ridley ran like h*ll and headed straight to Alabama to her Daddy and ends up falling right into Venom's arms, the one guy she's always had a crush on. Although now the way she feels about him is anything but a crush. This story is fast, hot and all kinds of sexy.

Holy hotness! There are so many steamy scenes that you will have to fan yourself while reading. On top of that, you have a really good story to follow. I enjoyed all of these characters and am looking forward to the next couple.