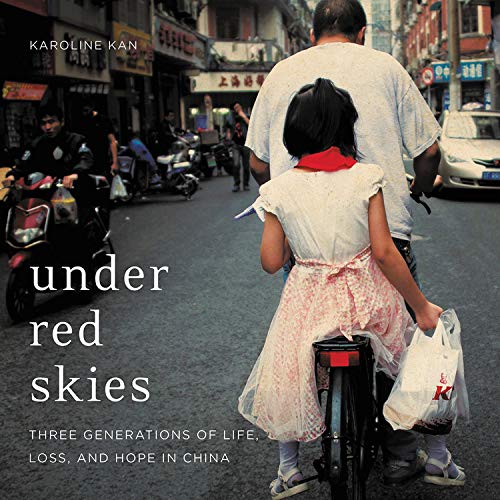 A deeply personal and shocking look at how China is coming to terms with its conflicted past as it emerges into a modern, cutting-edge superpower.

Through the stories of three generations of women in her family, Karoline Kan, a former New York Times reporter based in Beijing, reveals how they navigated their way in a country beset by poverty and often-violent political unrest. As the Kans move from quiet villages to crowded towns and through the urban streets of Beijing in search of a better way of life, they are forced to confront the past and break the chains of tradition, especially those forced on women.

Raw and revealing, Karoline Kan offers gripping tales of her grandmother, who struggled to make a way for her family during the Great Famine; of her mother, who defied the one-child policy by giving birth to Karoline; of her cousin, a shoe factory worker scraping by on six yuan (88 cents) per hour; and of herself, as an ambitious millennial striving to find a job - and true love - during a time rife with bewildering social change.

Under Red Skies is an engaging eyewitness account and Karoline's quest to understand the rapidly evolving, shifting sands of China. It is the first English-language memoir from a Chinese millennial to be published in America and a fascinating portrait of an otherwise-hidden world, written from the perspective of those who live there.

"Vivid and humane, Karoline Kan's memoir of coming of age in China is richly revealing and contemporary, shaped both by the pain of history and the hope for the future - at turns bold and vulnerable, like China itself." (Evan Osnos, National Book Award-winning author of Age of Ambition: Chasing Fortune, Truth, and Faith in the New China and New Yorker staff writer)

"Poignant, humane, and insightful, [Under Red Skies] brings the extraordinary story of the last fifty years in China vividly alive. The Kan family's struggles to survive and prosper through many adversities, largely inflicted on them by government, are a moving testament to the resilience and determination of three generations of women." (Isabel Hilton, OBE, founder of China Dialogue and author of The Search for the Panchen Lama)

"A remarkable multigenerational memoir that clearly explores 'the real China - its beauty and ugliness, the weird and familiar, the joyful and sad, progressive and backward at the same time'." (Kirkus Reviews, starred review)

Insights into Three Generations in China

As the title promises, this book is an exploration of the events and experiences that shape three generations of a family in Northern China. We get insights into the Cultural Revolution, the One Child Policy, and the gap between China's rural and urban societies. It is an interesting listen and the narrator is overall pleasant to listen to. Recommended for those curious about life in China.

Good listen and insight into China

Having lived in China 1986 to 1987, I enjoyed this insightful generational tale of China under Communism,. I especially enjoyed hearing what life is like for young people today, which is so different from when I lived there. I just wish there had been more detail about the affects of communism on their daily lives as that was especially intetesting.

Get to know the real China better

History of life for Chinese women

I have lived in China three times - once in 1989, once in 2006, and presently. I have an understanding of how China has changed over time, but I appreciated an insider's perspective of how the private lives for one family's women has been impacted by that changing China. The author was born in the Tiananmen Square era - her life reflects the growing economic stability that was promised. It was interesting to consider the costs of those gains. I recommend this book to anyone curious about the past for decades of the sleeping dragon.

Probably fantastic if you’re not from China of this generation, but...

It’s probably an amazing book for a non-Chinese to read. But for me, someone born in 1996 and lived in Beijing all the way till 18, probably not as intriguing. Still a pleasant read.

I have lived in China for 10 years and this book is sooo spot on about modern China. Loved it.

This book is mostly for junior high school girls but also of interest to more serious readers who will find nuggets well worth the time.

An intimate view of real life in China

The story is touching . Even though I Have studied and visited China multiple times, I still gained valuable and substantial new insight into the plight of young Chinese women.
The only thing I found in error is the criticism of the Trump administration. Obviously Ms. Kan based her views on erroneous and biased news agencies from the USA and in China.
A strong and determined American president is exactly what is needed to check the abuses of the CCP she describes. I trust Ms. Kan will independently research American politics for herself and form her own conclusions. America loves Chinese people, but not the Chinese government. Our cities are full of smart , hardworking Chinese who are a wonderful part of the AMERICAN fabric. May
God bless them!!