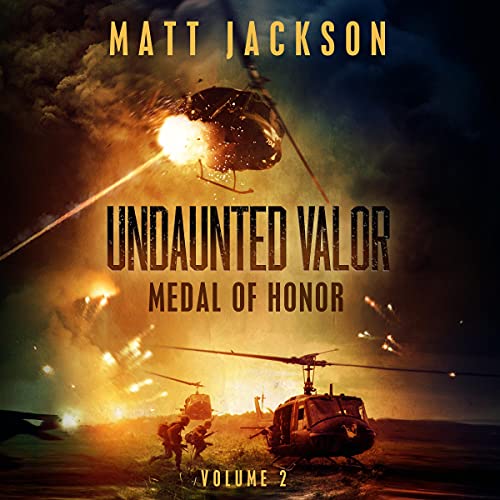 Tracer fire streaked through the sky like angry bolts of lightning....

Metal crunched and the helicopter shook.

Smoke and flames began to fill the aircraft. They were going to crash....

Major Adams flew low over the treetops in his Huey, expertly dodging enemy ground fire until his helicopter was shot down. On Firebase 6, 1st Lieutenant Brian Thacker fought desperately to provide the besieged men the time they needed to retreat. They had to get into the helicopters before they were overrun by the North Vietnamese.

Will the calls for artillery fire be enough to turn the tide of this battle?

Will Lieutenant Thacker or Major Adams survive? Join Lieutenant Dan Cory as he returns to Vietnam with his old unit, flying north from Lai Khe to Dak To.

Undaunted Valor recounts the battle that took place on Firebases 5 and 6 in Dak To that resulted in two men receiving the Medal of Honor.

Matt Jackson recounts some of the most intense helicopter and ground combat action of the Vietnam war from the eyes of a man who spent two combat tours there. His accounts reveal the dedication the helicopter crews had to each other and the grunts they supported. Awarded the Silver Star for his own actions in the battle, Matt brings a realism to this long-forgotten battle that continues to play out in the minds of those who fought it.

If you love heart-pounding action, visceral battles, and true tales of heroism, grab your copy of Undaunted Valor today.

All the production flaws in volume 1 have been completely eliminated. Zero complaints 10/10.

The story jumps around a lot between flight crews, pilots, command staff, etc. which is a little confusing at the beginning, but it all starts making sense rather quick after the first couple times and you get a feel for everyone involved. Like volume 1, Medal of Honor is a fantastic story that gives you a really good insight into the chaos that Vietnam offered up for these guys in the huey’s. I know this just came out, but I can’t wait until volume three is released to expand the story that Chicken Man has to tell.

These books are marvelously written. They are easy to get sucked into. I look forward to the last book in this series being released.

Matt Jackson Does it Again

Volume 2 of Vietnam Helicopter Pilot delivers the same guts-level experience of his first opus. For those of us who flew Army Helicopters in that “long, long ago, far, far away” war it brings back memories, some good, others not so good. For those who did not fly there, then, it brings one as close as one can get to the every-day experience of being there, from the boring and mundane to the adrenaline-pounding terror of flying into a hot LZ, maybe to fly out, maybe not. The author’s characters are real. You get to know them as if you flew with them. The spellbinding finish invokes both pride and sadness. I’ve read all three of Matt’s books, living through the person of Dan Cory, one of the most accomplished of the “Chickenman” aviators. I eagerly await his volume 4.