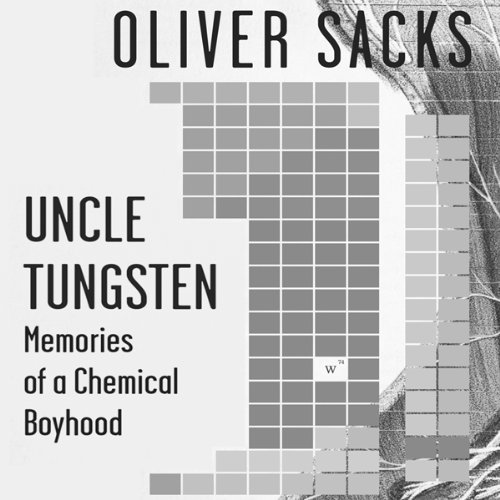 Long before Oliver Sacks became a distinguished neurologist and best-selling writer, he was a small English boy fascinated by metals - also by chemical reactions (the louder and smellier the better), photography, squids and cuttlefish, H.G. Wells, and the periodic table.

In this endlessly charming and eloquent memoir, the author of The Man Who Mistook His Wife for a Hat and Awakenings chronicles his love affair with science and the magnificently odd and sometimes harrowing childhood in which that love affair unfolded.

In Uncle Tungsten we meet Sacks' extraordinary family, from his surgeon mother (who introduces the 14-year-old Oliver to the art of human dissection) and his father, a family doctor who imbues in his son an early enthusiasm for housecalls, to his "Uncle Tungsten", whose factory produces tungsten-filament lightbulbs. We follow the young Oliver as he is exiled at the age of six to a grim, sadistic boarding school to escape the London Blitz, and later watch as he sets about passionately reliving the exploits of his "chemical heroes" in his own home laboratory.

Uncle Tungsten is a crystalline view of a brilliant young mind springing to life, a story of growing up which is by turns elegiac, comic, and wistful, full of the electrifying joy of discovery.

"Good prose is often described as glowing: luminous, numinous, glimmering, shimmering, incandescent, radiant. Sacks's writing is all that, and sometimes, no matter how closely you read it, you can't quite figure out what makes it so precisely, unsparingly light... By the time he was 15... Sacks's attention began drifting away from chemistry.... He can't quite say why he abandoned his first love and Mendeleev's Garden. His 'intellectual limitations? Adolescence? School?.... The inevitable course, the natural history, of enthusiasm, that burns hotly, brightly... and then, exhausting itself, gutters out?' No matter. With 'Uncle Tungsten,' Sacks has reignited the fire, so the rest of us can read by its glow." ( The New York Times Book Review)

I think this book will best, and perhaps only be enjoyed by A.) lovers of Oliver Sacks work..B) by those that love chemistry and the table of elements. C)...very patient readers willing to go through the history of his each and every chemical compound exposure to finally sieve from it a fascinating wonderful childhood story full of amazing influences from friends and family.

Im in A and C camps, so loving the mans work and being willing to endure very long extracts about chemicals that I will never be able to appreciate or understand, is a worthy price for me to have payed . I could only dream of coming from such a family and having such a fun and rewarding childhood. It goes far in explaining how Sacks has come to be the unique wonderful inspiration that has given us so much on so many levels.

Sacks writing certainly isn't for everyone, but I enjoy it and for those that have read his other work and have liked it, I think its a fair bet that you'll like this foray into his mostly charming and unbelievably lucky childhood. If you like his writing also try... A Leg to Stand On...

Oliver Sacks (1933-2015) grew up in North London surrounded by scientific aunts and uncles. Both his parents were physicians. His mother was a well-known obstetrician and one of England’s first female surgeons. His brothers also went on to become physicians, as did Oliver.

Oliver’s Uncle ‘Tungsten’ Dave owned a light bulb factory on Farringdon Road. Uncle Dave helped Oliver with experiments in the laboratory and taught him about all the elements. Oliver was fascinated with Tungsten and its properties and resilience. When age 6 in 1939, he was sent off to Braefield, a boarding school. The school moved from London to the countryside because of the war. The school was run by a sadistic headmaster. Sacks tells the usual horror stories of the British boarding school. Sacks provides a history of the development of modern day chemistry and compares this to alchemy. As he learned about the founders of modern chemistry he followed their experiments step by step. He was primarily interested minerals.

Sacks taught himself photography and had a passion for chemistry. He found its elegant simplicity in a world of chaos during World War II. The book ends at adolescence. At age 14 he decided he wanted to be a physician.

The book is well written and the curiosity of young Oliver shines through. Sacks went on to become a famous neurologist and has written many books. His most popular one is called “Awakening” about sleeping sickness. His parents were ardent Zionist and he discussed his Jewish faith. Oliver was surrounded by relatives that were physicians and scientist; it is no wonder he was fascinated by the world of science and had a gift for scientific inquiry.

Jonathan Davis did a good job narrating the book. Davis is a voiceover artist and a three-time winner of the Audie award for audiobook narration.

If I had a wish to come true of meeting a living person to spend an hour with, I think It would be Oliver Sacks. Whole-brained thinker and creative as well as scientific and always wide open senses. Great book. Fascinating life as well as person.

A childhood of science

Would you consider the audio edition of Uncle Tungsten to be better than the print version?

What other book might you compare Uncle Tungsten to and why?

The Disappearing Spoon, which tells the story of the formation of Mendeleev's periodic table of the elements.

I enjoyed the scene where he nearly asphyxiated himself by mixing chemicals in his bedroom as a child. Any modern parent would surly take away all the chemicals. Sacks' parents promptly put him up in safer quarters and encouraged his experimentation. Surely he is a genius but this was a genius in parenting and trusting an obviously bright and driven child.

No, I enjoyed breaking it into parts as I drove to work each day.

Sacks discusses science and the history of science with the same enthusiasm that he had as a child, while sharing some biographical details that illuminate his subsequent career as a neurologist and observer of human perception.

Would you listen to Uncle Tungsten again? Why?

I don't think I would. It was enlightening, and really wished I'd found this book back in high school when I remembered what all the valences and atomic numbers meant. It was a good refresher, and amazing to speculate, but felt too much like a chemistry textbook.

This is a wonderful read with a OUTSTANDING narrator. I don't think the book would've kept my attention should I have read it on paper, but the information was delightfully absorbed via audio. Sacks' books have always been lyrical and melodic in his usage of language and simple explanations of concepts. However this book seems less like a biography than a chemistry textbook, and it describes the environment during his childhood as opposed to his own experiences. The book made me really excited about chemistry again though!

An incredible story of the progression of chemistry in the world and the fascination of a child!
Difficult for me to follow the timeline but that may just be me :)

Always a pleasure to read about Oliver Sacks

I've never thought a book with a heavy chemistry information load could prove to be as inspiring. I found myself remembering my own childhood and encounters with chemistry. After reading Sacks most recent memoir, this fills the gap beautifully

If you want to get a kid interested in chemistry, this is not the book. If you know chemistry it's a snore. If you are interested in Dr. Sack's family (Jewish, Indian, British), he could write a more thorough autobiography.

Though I am quite sure that lichen is always pronounced like-n, and nowhere lich-en.

Still, I will listen to this more than one more time, and suggest it to many others.