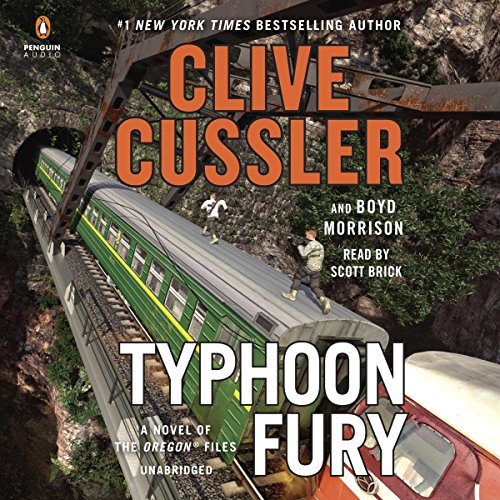 Juan Cabrillo and the crew of the Oregon sail into a perfect storm of danger to try to stop a new world war, in a thrilling suspense novel from the number one New York Times best-selling grand master of adventure.

Hired to search for a collection of paintings worth half a billion dollars, Juan Cabrillo and the crew of the Oregon soon find themselves in much deeper waters. Not only is the vicious leader of a Filipino insurgency using them to finance his attacks, but he has stumbled upon one of the most lethal secrets of World War II - a Japanese-developed drug, designed, but never used, to turn soldiers into superwarriors. To stop him, the Oregon must take on not only the rebel commander but a South African mercenary intent on getting his own hands on the drug, a massive swarm of torpedo drones targeting the US Navy, an approaching megastorm - and, just possibly, a war that could envelop the entire Asian continent.

Loved Boyd's Jeopardy Easter Egg. Like the new crew member...interesting. I was really sweating The Oregon would be gone...on the edge of my seat, my heart sank, and then...LOL you guys are. just going to have to read the book to see what happened. Each time I say how can the next one be better and then it is the best one yet. I had to remind myself to breathe from time to time.

I have enjoyed the Oregon File Series by Cussler. This is book number twelve in the series. I noted Cussler has a different co-author, Boyd Morrison, for this book.

Project Typhoon was a military name given to the drug developed by the Moral Division in World War II. Cabrillo and the Oregon crew are assigned the mission of finding the alleged hidden cache of the drug. Cussler provides a strong women character in this story. Beth Anders and her female bodyguard, Raven, have infiltrated Udom and his group who are also after the drug. Anders is kidnapped. Cabrillo and crew to the rescue.

The book is well written and is jam-packed with action. As with all of Cussler’s stories, there is a historical perspective. Most of the story is set in Asia which adds more excitement to the story. The characters are well developed and the plot twists and turns. This is a good “get away from it all” book.

The book is just over twelve hours. Scott Brick does an excellent job narrating the story. Brick has narrated the entire series. Brick is as actor and a multi-award-winning audiobook narrator. He was a 2017 inductee to the Audible Narrator Hall of Fame.

Not one of the best

I love the Oregon Files books, but this one not so much. I found the story boring and a little too far fetched. It almost felt like I was listening to a Marvel Comics book. Scott Brick is great, as usual, but the story wasn't very appealing to me. Maybe Clive Cussler is grasping at straws to come up with a new adventure?

Somewhat different too...in a good way! Not as much history but as usual a good story line from a tidbit of unknown or obscure history

It has been awhile since I have read a Cussler book and this one seems to fit the mold of being interesting, fast moving, and original. So I cannot complain. I listened to the audible version and thought the reader Scott Brick was a little much with his voice intonations and made me notice him too much. Also the characters seem more one dimensional than in the early real Cussler books.

Clive Cuddler has created a wonderful world with his stories, and this is no exception. the Oregon files are one of my favorite series of books. I wish that Scott Brick had time to read every audio book ever made, because his performances are without equal. if you pick these books up, and you're a fan of military thrillers, then you will not be disappointed.

Love Scott Brick's realistic Filipino accents and the adventure through all the Philippine locations. Highly recommended.

rough recording at end of book

last chapter had some bad spots but great book.
enjoyed it and would recommend it

I almost always say the Clive Cussler, et al. gives you what you expect and want. This one was particularly good. I loved the characters, and I loved the plot. Scott Brick delivers as always. A good listen.

I enjoy the Oregon series and Clive Cussler in general. Though not the most theatrical narration it is varied enough to be interesting and is better than most.