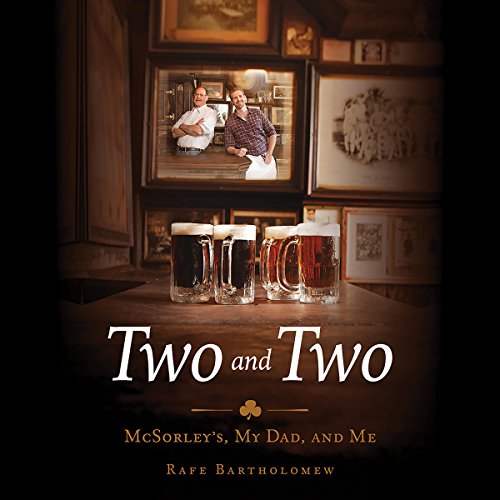 McSorley's Old Ale House has been serving light and dark ale on the Bowery in New York City's East Village since 1854. Although a Supreme Court ruling forced them to allow women inside in the 1970s, many of the bar's quirks have been constant for over a century, down to the newspaper-covered walls, Houdini's handcuffs, the raw onions, and its sawdust-strewn floors.

But it's not just the decorations and attitude that stayed the same; it's the people who work and drink there. Rafe Bartholomew's father has been a bartender there for 40 years, and since he was a young boy, Rafe has considered the bar a second home, doing odd jobs and chores for the staff until he was old enough to start slinging ales himself. It became the place he and his dad mourned his mom, and it remains the place in which they're closest. The stories that he has from his years at McSorley's - and the stories he heard from his father - are touching, humorous, crude, moving, and always authentically New York.

Two and Two is a memoir of place - both a bar and a city - but also of the community of people who make up one of the last vestiges of a world that is quickly vanishing and a look inside a father-son relationship that asks questions about living up to our fathers' expectations, following in their footsteps, and growing up.

"McSorley's Old Ale House had been a Manhattan legend for more than 100 years when the author's father was hired on to work the taps.... The nostalgia-drenched memoir makes us want to revisit the joint." ( Booklist)
"There is no bar in New York City - perhaps even all of America - with as much history as McSorley's Old Ale House...but for former Grantland editor Bartholomew, McSorley's was just home.... The author expertly weaves together entertaining stories from his nights behind the bar...with more poignant moments between father and son.... Bartholomew does both his father and McSorley's proud with this touching, redolent memoir." ( Kirkus)
"[A] big-hearted memoir of a lifelong romance with New York City's oldest (continuously operating) saloon...a watering hole for artists, politicians, and oddballs, a storehouse of oral tradition passed through generations of staff.... [Bartholomew's] portrayal of the rough humor and blue-collar warmth feels completely earned." ( Publishers Weekly)

I don't like beer, rarely go into bars, but I love true stories. This was so good.