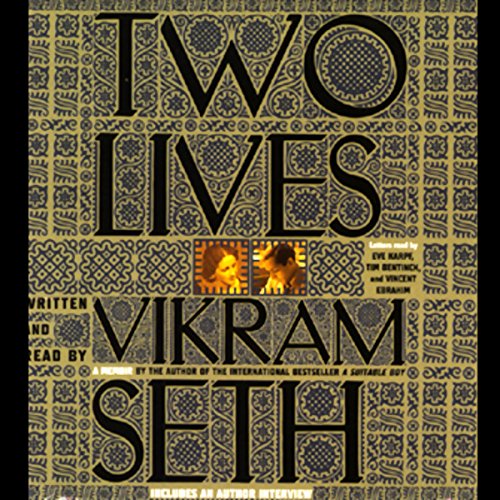 This is a heartrending new book, the story of a marriage and the story of two lives, from the author of the international best-selling novel A Suitable Boy.

Shanti Behari Seth was born on the eighth day of the eighth month in the eighth year of the twentieth century; he died two years before its close. He was brought up in India in the apparently vigorous but dying Raj and was sent by his family in the 1930s to Berlin, though he could not speak a word of German, to study medicine and dentistry. It was here, before he migrated to Britain, that Shanti's path first crossed that of his future wife.

Helga Gerda Caro, known to everyone as "Henny" was also born in 1908, in Berlin, to a Jewish family, cultured, patriotic, and intensely German. When the family decided to take Shanti as a lodger, Henny's first reaction was, "Don't take the black man!" But a friendship flowered, and when Henny fled Hitler's Germany for England just one month before war broke out, she was met at Victoria Station by the only person in the country she knew: Shanti.

Vikram Seth has woven together their astonishing story, which recounts the arrival into this childless couple's lives of their great-nephew from India, the teenage student Vikram Seth. The result is an extraordinary tapestry of India, the Third Reich and the Second World War, Auschwitz and the Holocaust, Israel and Palestine, postwar Germany and 1970s Britain.

Two Lives is both a history of a violent century seen through the eyes of two survivors and an intimate portrait of their friendship, marriage, and abiding yet complex love. Part biography, part memoir, part meditation on our times, this is the true tale of two remarkable lives, a masterful telling from one of our greatest living writers.

A slow start but keeps getting better

I bought this book on an impluse. I had read his "Suitable Boy" and jumped at a chance to read his latest book. I think he is a fine author. I must say I did not enjoy this book as much as I had liked "Suitable Boy" but then I think a comparison between those two books is unfair. This book is more personal and therefore more 'real'. The narration by Vikram Seth is very engaging. I think this book would be enjoyed by all those who have read Vikram Seth before. This book gives you an insight into the author himself. Its almost like having a chance to meet the author in person and getting to know him.
If you like fiction, if you have read Vikram Seth before, I am sure you will enjoy this book.

I really enjoyed this book - it gives a perspective on the writer, Vikram Seth, and is a compelling story about the lives of 2 very different people, brought together by a war. The format is the letters of Shanti and Henny to each other, and their friends. It gives a very realistic view of what life was like during and after the war as well, which was very unsettling - to see the effects on ordinary people. If you like memoirs, you should like this book. The reading is also done very well, with 3 different readers contributing.

A lovely and thoughtful book. It has a close-up, personal view of WW2 comparable to that in Suite Francaise by Irene Nemirovsky.

Dull story, disjointed and dry. Very disappointed that I wasted a credit on this book.

This story hit me at a time when the world news could be seen with a different lens...
When the student is ready the teacher will appear.

I cannot recommend this book enough. Mr. Seth does such a beautiful tribute to his own work—an excellent performance of the work. The themes and the narrative string were so perfect, perfectly written. I am so grateful this story exists and that Mr. Seth wrote it.

This was a beautiful, lyrical memoir about the author's beloved uncle and aunt, who came from very different countries and backgrounds (India and Germany, respectively) and who both survived WWII. Their experiences were very different and yet uniting. I recommend this book for people who like thoughtful, lyrical writing and are curious about the lives and experiences of others, both joyful and tragic.