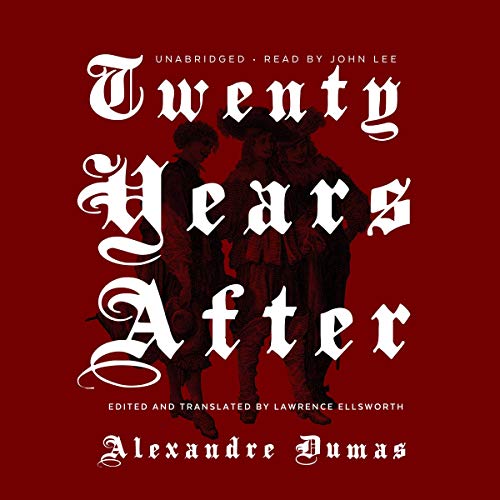 A new translation of Dumas’s rousing sequel to The Three Musketeers, picking up 20 years after the conclusion of that classic novel and continuing the adventures of the valiant d’Artagnan and his three loyal friends

The Three Musketeers, Alexandre Dumas’s most famous and enduring novel, completed its serial publication in the summer of 1844, and by the time of its book publication at the end of that year, readers were already demanding a sequel. They got it starting in January 1845, when the first chapters of Twenty Years After began to appear - but it wasn’t quite what they were expecting.

When Twenty Years After opens it is 1648: the Red Sphinx, Cardinal Richelieu, is dead, France is ruled by a regency in the grip of civil war, and across the English Channel the monarchy of King Charles I hangs by a thread. As d’Artagnan will find, these are problems that can’t be solved with a sword thrust. In Twenty Years After, the musketeers confront maturity and face its greatest challenge: sometimes, you fail. It’s in how the four comrades respond to failure, and rise above it, that we begin to see the true characters of Dumas’s great heroes.

A true literary achievement, Twenty Years After is long overdue for a modern reassessment - and a new translation. As an added inducement, Lawrence Ellsworth has discovered a “lost” chapter that was overlooked in the novel’s original publication, and is included in none of the available English translations to date - until now.

Unabridged, except that half is left out

If this were sold as Twenty Years After, Part One of Two, it would deserve high marks. But it's sold as Twenty Years After, Unabridged, EVEN THOUGH IT'S ONLY HALF THE BOOK. So I've cut my Overall and Story ratings in half as well. For what it is, it's a worthy undertaking, but it's NOT an unabridged recording of Dumas' novel. (The remainder is to appear later, under a different title, presumably in order to make it harder for audiences to follow up on. Shrewd marketing all around.)

Don't get me wrong. As Part One of Two, this partial version is worth purchasing, and I look forward to the follow-up. There are plenty of series books in which the reader is left hanging at the end of individual installments, after all, so the mere fact that Twenty Years After has been split in two doesn't provoke that much indignation. But that it has been split in two should be ANNOUNCED on the cover and in the product listing. To release *half* of a famous novel as if it were the *entire* novel is just inexcusable.

ADDENDUM (December 2020): Part Two of this translation has, at length, been released ... not as Twenty Years After, Part Two, which might have most readily helped potential purchasers who had been searching for the complete story, nor even as The Son of Milady, the title readers and listeners of this first volume have been alerted to watch out for, but as BLOOD ROYAL. Should be worth a listen, but what a way to do business!

Great recording! But it is not complete. It ends half way through which is a real bummer.

The narration is good but this version ends in the middle of the book. Very disappointing.

Not the whole book!

I would have like to have known this was not the whole book prior to have buying it. Also I have not been able to find the second half of the book The Son of Milady as the end of the recording says.

Not the Complete Book!!!

I love this book and tell it abruptly ended 2/3 of the way through the story. According to other sources this book should includes two more acts.