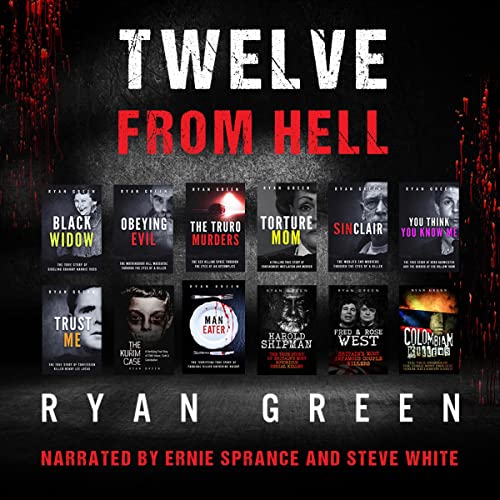 This Ultimate True Crime Case Collection contains disturbing accounts of some of the most brutal and bizarre true crime stories in history. Often told from the killer’s perspective, Green’s riveting narratives draw the listener into the real-life horror experienced by the victims with all the elements of a classic thriller.

Caution: This book contains descriptive accounts of abuse and violence. If you are especially sensitive to this material, it might be advisable not to listen any further.

You can't beat this awesome Twelvesome! This is a uber steal, 12 books for the price of one! Mr. Green and the hauntingly seductive voice of his narrator Mr. White are just what the season calls for. From the sicko psycho in Man Eater and the torturous duo of Fred n' Rose West, to those fiendish Columbian Killers, this epic 12 volume audiobook has more than enough real-life scares to fill your spooky season. Green has solidified his place as one of the Best in the True Crime genre with his intrinsic ability to evoke his subject's evil essence and send chills down your spine! So don't miss out and grab this treat!
You will be thrilled you did. 👻

Ryan Green has done it again!

I was lucky enough to be sent this audiobook collection from the author, Ryan Green, in exchange for an honest review! Oh…my….geez! Shew! My ratings have a lot to cover: Stars? 5/5 writing FOR SURE! + Sickening = 3/5 + Suspense = 3/5. HOWEVER, the Narrators get two separate ratings: Ernie Sprance 5/5 stars while Steve White 3/5 stars. That’s me, personally. I’m super sensitive to sounds & some of the noises made by Mr White hurt my ears to the point I would have to take a minute to recover.
•
There’s just so much to say about this collection! Cases covered:

~ Nannie Doss…why are giggling grannies inherently creepy?
~ The Mockingbird Hill Massacre…definition of a man who’s snapped.
~ The Truro Murders…No man could have this kind of power over me!
~ Gertrude Baniszewski…The house party you never can leave
~ Angus Sinclair…I would become a hermit if I lived in Scotland at the time.
~ Fox Hollow Farm…The Midwest is where interstate killers apparently flock to.
~ Henry Lee Lucas… you know him & Ottis Toole but do you know the extent of their insanity?
~ The Kurim Case…those poor boys never had a chance
~ Katherine Knight…she was way too casual for her crimes!
~ Harold Frederick Shipman…this one got to me-he looks like my neurologist & my grandfather’s name is Harold.
~ Fred & Rose West…The House of Horrors is right! - **very graphic**
~ Colombian Killers…WHAT?! Between them, they were convicted of 329 murders, but it’s believed that the number they committed is over 750?!

I have been recommending this to everyone I know that wants to know more about true crime.

A true treasure trove of terror...

This compilation of stories representing the first twelve case studies undertaken by the author will undoubtedly provide hours of engrossing reading for any enthusiast of the true crime genre. Contained within this collection are detailed accounts of truly horrifying but absolutely true events showcasing the depths of inhumanity that some people are capable of inflicting on their fellow man. The book blurb succinctly itemizes which perpetrators of misery and mayhem are featured within but only after reading a few of the stories can you truly begin to appreciate the grim and gruesome reality imposed by the few upon the many. I felt the earlier stories were a bit more traditional and clinical in their approach but, regardless, provided a thorough and well-researched account of some truly despicable individuals and their heinous crimes. It did not take long for the stories to begin to reflect a burgeoning new style of writing which has propelled Ryan Green to the top of his chosen field. Often writing from the viewpoint of the killer or a close associate/accomplice, his signature style deftly combines witness accounts, police and court records, and astute psychological conjecture which unfailingly results in a vividly detailed and incredibly compelling account of the subject and their horrendous transgressions. While I was amazed and horrified by the actions taken by these seriously damaged individuals, I felt the considerable attention given to their past traumas and experiences, in many cases, provided at least a modicum of explanation for their shocking behavior. Precious few true crime writers provide as much historical background and psychological analysis as Mr. Green and that, in my opinion, places his work among the very best of the genre. I had read all these stories prior to this collection coming out but as each case is of historical significance and each is so well presented I had no reservations about reading them again but this time I read along as I listened to the audio version of this collection. The first four stories were narrated by Ernie Sprance and the remainder were narrated by Steve White. Both narrators did an outstanding job in bringing each story to life in all its grim and chilling detail. I highly recommend this collection and believe it to be well worth your investment of time and money.

Not quite what I expected.

The book where the mom tortured the girl is a bit much. I’m not sure where that came from.