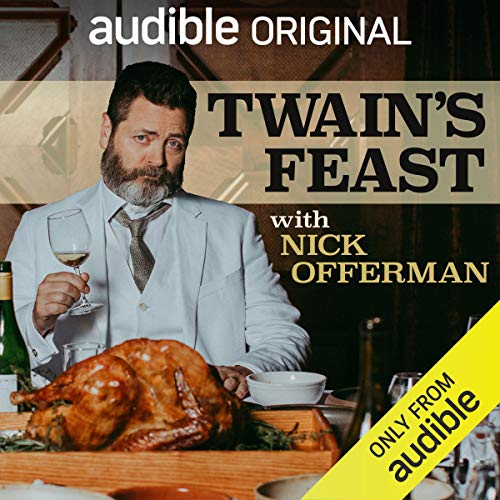 Mark Twain, beloved American writer, performer, and humorist, was a self-proclaimed glutton. With the help of a chef and some friends, Nick Offerman presents the story of Twain’s life through the lens of eight of Mark Twain’s favorite foods. As we explore these foods’ role in Samuel Clemens’ life, we also discover a surprising culinary and ecological history of America. The biggest celebrity of his time, Twain was a witness to a transforming country, and with historian and writer Andrew Beahrs as a guide, Beahrs and Offerman take documentary excursions across America, illuminating each dish and bringing to life a broad sampling of Twain’s writing. Twain’s Feast is a rollicking information-packed journey into the rich culinary history of America, with the sharp eye and unmistakable wit of Mark Twain himself.

Portions of this audiobook contain mature language and themes. Listener discretion is advised.

Twain's Feast was in particular of shockingly poor quality. To be clear, this was the research for, creation of, and partial filming for an unsold pilot show for television. What we've been presented with are the narrator's audio links joining up audio culled from filming and producers doing research prior to shooting that never took place.

Numerous references to the fact that they were filming are left in, along with an extreme amount of dead air between lines/bits. Guests are named, and never spoken to again. The narrators repeatedly point to things we can't see, because this was filmed, not merely recorded audio (Look at..., See that...). It might have been interesting to see the television program originally intended, but given what bits were culled to make this Audible Original, I can see why no network was willing to fund it.

I got it for free and I still feel ripped off.

Not what you would expect

So, there are some very compelling elements here - fancy food, Nick Offerman, and Mark Twain. Bring it!

None of that is the main focus of this story. This tale wanders more than the Mississippi (and that is a not in jest). There are some kinda awful descriptions of what is to be eaten (Raccoon? Lion fish?), and a couple of indistinct comments (Wanda Sikes can barely be heard, and that is saying something), a few of comments by Offerman, then hours of speculation on every aspect of Twain's life by every Twain expert in the country. There is no joy in the food (even though it was served in the Twain home/museum), no joy in the company, no joy in discovering Twain through foods he loved and craved. Just a harried, over worked chef, a few grunting comments by the assembled diners, and Twain minutia. Boo! Lost opportunity.

Why Did I Think This Would Be About Food?

Ridiculous. It's not remotely about Twain or food. It's very much like a bad episode of "Fresh Air".

Not a whole lot of food involved

Thought the story would have spent the majority of its time on the food and preparations of turn of the last century American cuisine for hours, but it was refreshing to learn more about Mark Twain in general.

I love the idea of recreating culinary history, and in that, expect historically accurate ingredients to be used. Are you kidding me when the chef makes a vegan rendition of a Twain favorite? What!? And why invite a vegan and a girl who is allergic to oysters, when 99% of period foods were dairy based and people of the time loved oysters? "vegan mexican street corn?" NOT historically accurate. Smoked raccoon with Wagyu beef? Why not make the recipes as they were and experience an authentic taste of history? I admittedly did not finish the podcast. Keep historic authenticity!

Misrepresented and misleading, not worth the time.

The book's title tells you and gives you the idea of what the book is going to be about. When you listen to the book it's anything but. The information does not pertain to the subject matter and at times I found it extremely frustrating. Long gaps in silence from bad editing make you have to check the audible book to see if it's even still playing. It's a good thing this book was free otherwise I would be asking for my money back.

I really enjoyed this! I have had mixed feelings about Mark Twain but this book really helped me appreciate him more and put his literature into context a little better for me. Nick Offerman is of course wonderful! Highly recommend this book!

This is one of those books that kinda sneaks up on you. The book is so much more than what the description leads you to believe.

I came here for a story but what I received was an epic journey of life and food.

It's difficult to be too hard on any combination of Nick Offerman and Mark Twain, as they pair better than cranberries and cheddar, but overall I actually found this book to be a let down. For one, to call it a book is incorrect; this feels like a collected edition of a podcast. I know it was inspired by a book, and adapted from it on a conceptual level, but with the interviews and production, it is clearly a whole new animal. In that regard, as both a book and as an adaptation a it leaves something to be desired. Offerman is not present enough to be an actual narrator, but it's more of a podcast guest, or possibly co-host. And, as A single narrative, it is disjointed and loses itself. The presented premise is if a feast made from Twain's favorite dishes, with stories from his life to explain why those dishes might have been significant. With that goal in mind, the story falls far short; the meal apparently did not have much in the way of planning, as many ingredients could not be sourced, and where some were sourced, the chef did not know from where, or really how to prepare them. The meals he did cobble together in a roach coach outside were served to a group of people who could not have been less enthusiastic about eating them. about halfway into the narrative, the meal structure was pushed all the way to the background and was barely mentioned again. Yet, if it had been produced as an actual podcast, it could have been ongoing, with each episode including an item from Twain's full list (not the 8 items from it seemingly haphazardly selected for this feast), with each dining experience actually planned, prepared, served to guests, and a story told. I would listen to every single episode of that experience.

As it stands, this narrative is trapped halfway between a fun concept and a traditional biography, halfway between a book and a 4-part This American Life feature on Mark Twain. Nick Offerman is charming and easy to listen to, the editing is baffling and jarring, the subject is interesting enough. If you have something else to do, and want background noise, this is great. If you want a truly engaging read, go for Offerman reading a Connecticut Yankee in King Arthur's Court, or petition him to narrate the entirety of Twain's autobiography (because that would be amazing).

More of a magazine article than a book. It's preachy from that arrogant, uninformed view point that's so popular among the semi-educated these days. Most damning are the assumptions about regional relationships that are plebeian at best. Too bad that content had so little to do with the title. Really, it was just a waste of time.