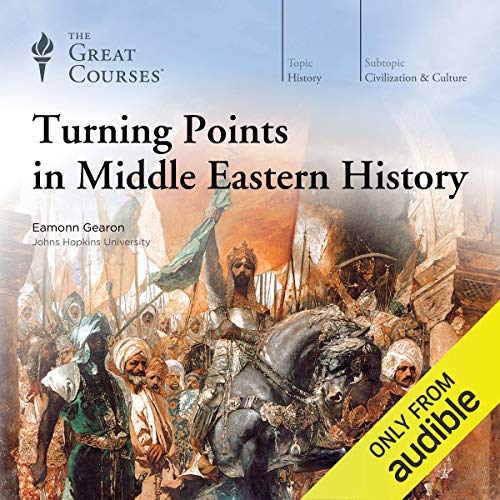 The Middle East is a critically important area of our world. And, with its current prominence in international affairs, media images of the Middle East reach us on a daily basis. Much media coverage, however, is incomplete at best, failing to take account of either the complexities or the historical background of this pivotal region. For most of us, the real story of the Middle East remains untold. What made this crucial geopolitical area what it is today? In coming to terms with the present and future of the Middle East, an understanding of its history is not only highly valuable but essential.

Now, the 36 lectures of Turning Points in Middle Eastern History unfurl a breathtaking panorama of history, exploring a 1,300-year window from the rise of the warrior prophet Muhammad to the fall of the Ottoman Empire after World War I. Each lecture focuses on a specific moment that changed the direction of events or the narrative of history.

You'll witness the Battle of Karbala, where Muhammad's heirs - the Sunni and Shia - split once and for all. You'll discover the wonders of the Islamic Golden Age and marvel at the superlative advances in astronomy, mathematics, medicine, and literature - and the preservation of classical Greek and Roman wisdom - that unfolded in global centers of learning such as Baghdad, Cairo, and Cordoba. You'll follow the empire building of the Persian Safavids, the Egyptian Mamluks, and the Ottomans, among others.

The breakup of the Ottoman Empire yielded most of the modern states of the Middle East. The far-reaching impacts of its rise and fall, plus the long-lasting influence of the 18th-century Saud-Wahhab Pact between a desert ruler and a religious reformer, creating today's Kingdom of Saudi Arabia, are two more expressions of how the past suffuses the present. The stories you'll discover here are as dazzling as anything in the Arabian Nights and are all the more astonishing for being true.

I have a high standard for courses from TGC because they have such a solid track record of producing quality products. But every now and then they outdo even their excellent reputation. This course was one of those times and was exceptional in just about every way. It is easily in the 1% of courses that reach the highest of standards.

The professor’s narration is top notch primarily for two reasons:
o He excels at setting the context of a particular turning point: for example, he’ll explain the powers of the day during a specific turning point---which ones were rising and which ones were declining as well as the background of the central figures; This helps place a dynasty or event in historical context

o He is concerned with thoroughness and completion (two traits not always present in other professors): His great all-encompassing narration is accompanied by fact statements that fill in the complete picture: for example, he’ll reference how many total sultans reigned in a specific dynasty (or how many caliphates existed in Islam’s history), and what number in the sequence a specific subject of a lecture is (ex. Sulleiman was the 10th ruler of the Ottoman line) or he will be sure to explain which dynasty followed another one; This sounds like simple stuff but it is lacking in other courses and this type of all-encompassing view of history really made it easier to understand the whole picture and not get lost in the details

This course covers the Middle East from aprx. 622 AD to 1924 including:
o The origins of Islam under Muhammad
o The Rashidun Caliphate (centered in Medina and then Iraq)
o The Umayyad Caliphate (centered in Damascus, Syria)
o The Abbasid Caliphate (based on Baghdad, Iraq)
o The Fatimids Caliphate (based in Cairo, Egypt)
o The Umayyads caliphate in exile (based in Cordoba, Spain)
o The Seljuk Turks (based in Iran)
o Ayyubid dynasty of Saladin (based in Egypt)
o Mamluks (based in Cairo, Egypt)
o Mongols (based in modern day Mongolia)
o The Ottoman Empire (based in Constantinople, Turkey)
o The Safavid dynasty (forerunners of modern Iran)
o Saud-Wahhab people (forerunners of modern Saudi Arabia)
o Muhammad Ali’s empire (based out of Egypt)

I enjoyed all of the lectures but the best of the best were the following:
o 5 (history of the early Caliphates of Islam and the Shia/Sunni split)
o 15 (history of various kingdoms of medieval Sicily: Byzantine, Fatimid Caliphate, and Normans)
o 31 (19th century French invasion of Algeria)
o 35 (Middle East during World War I)

I know a course deserves five stars when I sense two things: I don't want the course to end/wish the professor would continue on even beyond the time period covered and it is difficult to find any flaws. In this case I would be ecstatic for the professor to produce a course on modern Middle Eastern history (1924 on). It would be an excellent way to close a current gap in TGC's catalog (Sorry, the U.S. and Middle East course was not one of the better ones).

Flaws are hard to come by but you could make an argument that this course is a little mistitled. Instead of seeing it as a collection of turning points you could see it as more of a history of the Middle East. A number of lectures were more about a specific person or rise of a specific dynasty vs. an actual event (or the signature event of their reign). However, this can also be seen as a strength since Professor Gearon didn’t just focus on a specific event but provided much more satisfying broad historical narration, content, and context of the region.

I can't recommend this course enough. There is history in it that just isn't present in other courses offered by The Great Courses. I learned a lot and would be surprised if anyone did not. My understanding of the Middle East's past is a million times stronger. I am anxiously waiting for Professor's Gearon's next course!

Closest thing the GC has to a study of Ottomans

Is this worth it? Yes, if you can deal with the arbitrary choices made! ( I certainly can!)

These lectures tread common ground with other great courses up to the rise of the Mamelukes. Then, as a combined Ottoman-Sarafid- Mameluke history, it truly comes to life. Arbitrary, of course, as is the nature of these event compilations (Oman and Libya tend to be wheeled out in passing to make room for more Egypt and Moorish Spain), a clearer idea of what these lectures are about really shines through once we reach the Crusades. The Orient-Occident confrontation as a clash of cultures and how much of this is really baloney! A good overall regional grounding to be listened to on Audible in tandem with (in my humble opinion) Rogan's "fall of the Ottomans" and Anderson's "Lawrence of Arabia". Until a specific series of Great Courses cover the Ottoman Empire (or Mameluke Egypt for that matter), this is the next best thing! I do feel the addition of an Oman-Zanzibar chapter may have added to this but the chap cannot put everything down...

I like how the lectures are disconnected approaching the history from different, yet simultaneous points of view. Instead of one long narrative it constantly reviews events but from the perspective of a different group or time. Helps to solidify the information through repitition without feeling repetitious.

a lot of explaining about the middle East

well done...might listen again for the things i ay have missed. worth the listen. I knew nothing before... but have a better understanding now.

Worth every second and every cent

I absolutely loved this audiobook/class.

Dr. Gearon is masterful in his presentation of middle eastern history. I will listen to this again sometime!

What did you love best about Turning Points in Middle Eastern History?

There is a LOT of information packed into this course. Given that this is an 18 hour course broken down into 36 lectures, we expect a lot of information. But we also don't expect that there is enough time to cover each topic in intimate detail. The course is an overview, and it is an excellent overview.

First, the title does not tell you everything you need to know. Specifically, this course covers turning points in Middle Eastern history from Mohammed and the start of Islam until about 1924. There are a few mentions in the last two lectures that go past 1924, but that's about it. Certainly, there are many, many more turning points in Middle Eastern history that are not covered, including ancient Egypt, Alexander the Great (and Hellenistic Egypt), the Roman Empire, etc. And there are other major turning points that come later, such as the forced creation of Israel by the U.N. Again, the title does not indicate that these very major turning points are not covered because they fall outside of the range of dates this course covers.

Second, you'd do well to have a map to keep track of where each lecture is taking place. While you may have a good idea where many things are, a map really helps to keep tabs on distances. Before the modern age, distance was a major factor in how large an empire could grow, and how difficult a military campaign might be to conduct.

Fourth, the lecturer is quite engaging. There were just a few lectures that seemed to drag, but most were quite engaging. And they got better the further into the course we got.

I recommend this course. I learned a lot from this course that helped put today's Middle East in perspective.

The speaker is eloquent and well informed. Much enjoyed! I will look for his other works.

As an Israeli, I knew so little about my region.

Would you listen to Turning Points in Middle Eastern History again? Why?

Sure! I'm an Israeli (of Jewish origin), and quit informed and learned (I'm have a PhD), and love learning history. Moreover, I'm a humanist, and do not hate or shun people that are different from me. However, I knew almost nothing of what was taught in the course. In Israel, in the education system, you hardly learn anything about the middle-east in the 1800 years between the end of the Jewish state and Jewish population in the 1-2 centuries AD, and 19 century. Also, in the western TV channels as Discovery, the History Channel, National Geographic etc- there are hardly any programs on the subject. This course is a must for all Israelis and western civilization. To acknowledge that most Arab and Muslim key figures (at least the ones in this course) were much more humanistic and trustworthy than most Christian and Jew key figures in History before the 19th century. People need to appreciate the huge contribution of Arabs and Muslims to the western civilization. Maybe this could reduce the Muslim and Arab phobia today.

To find out that the first university was founded in Morocco, by a woman!

Good coverage of ME history

This is a good introduction of the Middle East history. Each episode can be a book or more by itself. Author summaries the main points not all points.
I would recommend it.

It is interesting series of stories from history but the lectures lack depth or critical analysis of the events or the people behind them. I would recommend for anybody who is looking to get started on middle east history.

The topics are well chosen, they are eye opening in many cases, the lectures are well structured and easy to follow, the speaker talks clearly and is definitely an expert in the field... it was delightful to listen and I was sad when it ended.

Loved it! Captivating from start to finish and I highly recommend the narrator. A great listen.