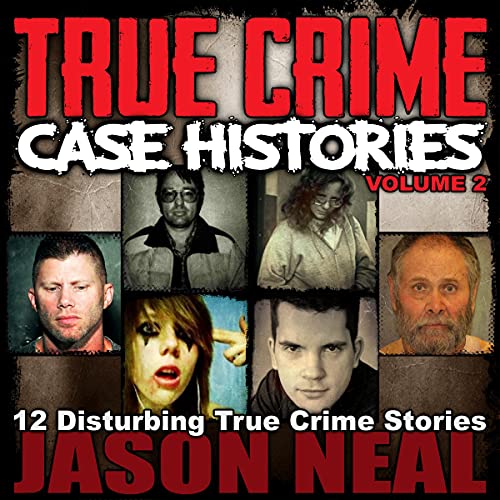 As with volume one, a quick word of warning. The stories you are about to listen to are brutally gruesome. They represent humanity at its worst. TV crime shows and stories in the news tend to gloss over the truly horrible parts, but the True Crime Case Histories series leaves out none of the details.

A sampling of the stories include:

The Girl in the Barrel - A homeowner finds a 55-gallon barrel in the crawl space beneath his home. What they find inside the barrel unlocks a murder mystery dating back thirty years.

The Dexter Wannabe - A young man obsessed with the TV show Dexter lures unsuspecting victims to his "kill room", and keeps a detailed diary of the dismemberment of his prey.

The Murder of Elizabeth Olten - A 15-year-old girl wants to know what it feels like to kill a person.

The Girl in the Box - An unbelievable story of a psychopath who kidnaps a young girl and keeps her as a slave locked beneath his bed for seven years.

The Green Chain Rapist - A beautiful young mother is butchered in broad daylight in a London park and the only witness is her two-year-old son. Police then waste three years chasing the wrong man while the real killer slaughters another woman.

Paige’s Secret Life - A young single-mother of three goes missing and police realize she's been living a secret life that her friends and family didn't know about.

A Walking Shadow - A suicidal teenager, frustrated with the bank threatening to foreclose on the family home, kidnaps the bank manager's ten-year-old son and holds him for ransom.

The stories included in this collection are dark and creepy, and will leave you with a new understanding of just how fragile the human mind can be.

Scroll up to get your copy