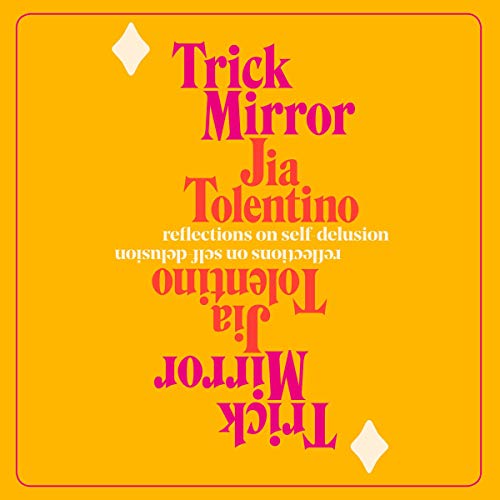 "From The New Yorker’s beloved cultural critic comes a bold, unflinching collection of essays about self-deception, examining everything from scammer culture to reality television." (Esquire)

“Jia Tolentino could be the Joan Didion of our time." (Vulture)

Jia Tolentino is a peerless voice of her generation, tackling the conflicts, contradictions, and sea changes that define us and our time. Now, in this dazzling collection of nine entirely original essays, written with a rare combination of give and sharpness, wit and fearlessness, she delves into the forces that warp our vision, demonstrating an unparalleled stylistic potency and critical dexterity.

Trick Mirror is an enlightening, unforgettable trip through the river of self-delusion that surges just beneath the surface of our lives. This is a book about the incentives that shape us and about how hard it is to see ourselves clearly through a culture that revolves around the self. In each essay, Tolentino writes about a cultural prism: the rise of the nightmare social internet; the advent of scamming as the definitive millennial ethos; the literary heroine’s journey from brave to blank to bitter; the punitive dream of optimization, which insists that everything, including our bodies, should become more efficient and beautiful until we die. Gleaming with Tolentino’s sense of humor and capacity to elucidate the impossibly complex in an instant, and marked by her desire to treat the listener with profound honesty, Trick Mirror is an instant classic of the worst decade yet.

"Jia Tolentino is the best young essayist at work in the United States, one I’ve consistently admired and learned from, and I was exhilarated to get a whole lot of her at once in Trick Mirror. In these nine essays, she rethinks troubling ingredients of modern life, from the internet to mind-altering drugs to wedding culture. All through the book, single sentences flash like lightning to show something familiar in a startling way, but she also builds extended arguments with her usual, unusual blend of lyricism and skepticism. In the end, we have a picture of America that was as missing as it was needed." (Rebecca Solnit, author of Men Explain Things to Me)

"Jia Tolentino narrates her own collection of essays with precision, clarity, and urgency.... Listeners receive an intense onslaught of sophisticated diction and syntax, but, thankfully, Tolentino uses vocal intonation to make her words accessible in the audiobook format.... Listeners will feel that Tolentino is talking directly to them, making her arguments even more compelling." (AudioFile magazine)

“It's easy to write about things as you wish they were - or as others tell you they must be. It's much harder to think for yourself, with the minimum of self-delusion. It's even harder to achieve at a moment like this, when our thoughts are subject to unprecedented manipulation, monetization, and surveillance. Yet Tolentino has managed to tell many inconvenient truths in Trick Mirror - and in enviable style. This is a whip-smart, challenging book that will prompt many of us to take a long, hard look in the mirror. It filled me with hope.” (Zadie Smith)

“I worship at the altar of Jia Tolentino, who is undoubtedly the sharpest and most incisive cultural critic alive. Jia is a for-real genius, so damn funny it's absurd, and her ability to cut through all the noise to reveal the heart of the matter is unmatched. What a gift to the universe that, in Trick Mirror, one of the subjects is herself.  This book is a master class in how to think about the world in 2019.” (Samantha Irby, author of We Are Never Meeting in Real Life)

“In Trick Mirror, Jia Tolentino’s thinking surges with a fierce, electric lyricism. Her mind is animated by rigor and compassion at once. She’s horrified by the world and also in love with it. Her truths are knotty but her voice is crystalline enough to handle them. She’s always got skin in the game; she knows we all do. Her intelligence is unrelenting and full-blooded, a heart beating inside every critique. She refuses easy morals, false binaries, and redemptive epiphanies, but all that refusal is in the service of something tender, humane, and often achingly beautiful - an exploration of what we long for, how we long for it, and all the stories we tell ourselves along the way.” (Leslie Jamison, author of The Recovering)

I sense that IRL Ms. Tolentino & I would disagree about many cultural and political issues...but I deeply valued and respected her opinions and sharp intellect. This was a fascinating book that I listened to in two days following which I purchased a hard copy. I love a read that helps me appreciate alternative perspectives without feeling toxic or critical or making me want to punch the person in the uvula. She is a wizard at accomplishing this.

I want Jia to talk to me about everything

The essays fit together to provide insights into the political moment. It's a deeper dive into subjects I thought I understood, and I learned so much.

This book elegantly articulates the reality we live in today in a way that resonates at a personal level. In the same moment that one feels deeply disturbed by the reality that Jia’s writing makes visible, one is also left profoundly comforted. She makes visible what we all already recognize to be true in such a clear and poignant way, it is as if she is articulating my personal experiences and thoughts with more grace and with better prose than I could muster to do for myself.

It is a breathtaking work. Best of all, it is filled with references to the world of literature that would make any book-lovers heart sing. This book has taken its place among my all time favorites; a must read for all.

It's mixed for me.

I love a lot of the messages Jia delivers in this book - and there are some truths nestled in here that are important ones everyone should hear.

That said, the pacing and organization was a bit off for me. At times it felt like rambling, directionless. I wish it had been a little more neatly assembled. It would have been easier to focus on. A few times I had to re-listen to chapters, unsure of how I ended up where I did. But maybe she intended it to be this way.

Comfortable enough that I think "I could write like that."

Erudite enough that I know I can never write like that.

I enjoyed it enough to purchase a written copy as well.

Life-changing the best book I have ever come across

This is notwithstanding works of contemporary literature this author has mentioned, the very best book I have come across as a young professional woman. Jia cuts deep to the root of all the issues that have been in my heart for over a decade and clearly defined the parameters of which my water reviews or sinking deep into. This work is brilliant in all aspects and I can’t wait for more from this author in a similar vein. Thank you Jia for your creativity, wit, and boundless yet thoughtfully curated research. This book is a gift to all young women who are living on planet earth at this time.

A masterpiece of thought

Just read it - and your mind will be expanded by the time you’re done. How many books/essays/ authors can you honestly say the same about? On top of her already perfect writing, Jia’s narration is seamless (and I’m very picky with narrators). Now, go listen to it and enjoy having your mind transformed.

Loved this book. Jia is so insightful. This book really makes you think about your life as a woman.

A Meaningful Read by a Wonderful Writer

This book spoke to me. With a background similar to the author’s...I’ve grown weary of divisive discourse and representation and statistics that neatly fit narratives. Then came a friend’s suggestion. Try Trick Mirror. An emotionally engaging first-person examination void of temper tantrums and self-indulgence. Very refreshing. Thank you, friend.