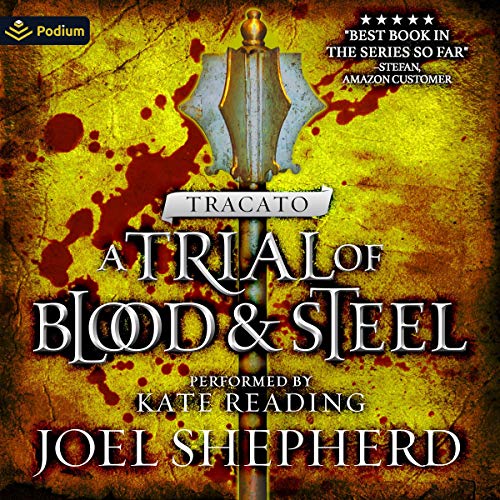 For 200 years Tracato has been the center of enlightenment, as the serrin have occupied human lands and sought to remake humanity anew. But the serrin have not destroyed Rhodaan's feudal families entirely, and as Tracato faces the greatest threat to its survival in two centuries, old rivalries are stirring. Sasha must assist her mentor Kessligh to strengthen the Tracato Nasi-Keth, yet with one royal sister siding with the feudalists and another soon to be married to Tracato's most powerful foe, her loyalties are agonizingly divided.

Worse still, from Sasha's homeland the Army of Lenayin are marching to make war upon Tracato. Can she fight her own people? Or must she join them not only and fight her lover Errollyn but extinguish the brightest light of hope in all the land - serrin civilization itself?

I loved the well defined characters, the cities and landscapes that were painted clearly in my mind's eye and a story so well developed that I felt like a character moving through each chapter. I truly appreciated the lack of predictability, the obvious effort to put forth an awesome story and the perfect narration of my favorite narrator, Kate Reading. Thank you, Joel Shepard.

This has been the best so far and the others were excellent!!! This one had so much action an trails to overcome you could not stop listening!!!! Keep it up!!!

This author is a master of plot and pacing, and I can't wait for the next one. The storyline continues to be engaging, the twists and turns are believable, and the characters continue to be likable in all their strengths and flaws.

As much as I prefer audiobooks for the freedom to do other things while listening, I may actually be impatient enough to go for the Kindle version of the next book, since it's already out. I need to know what happens next!