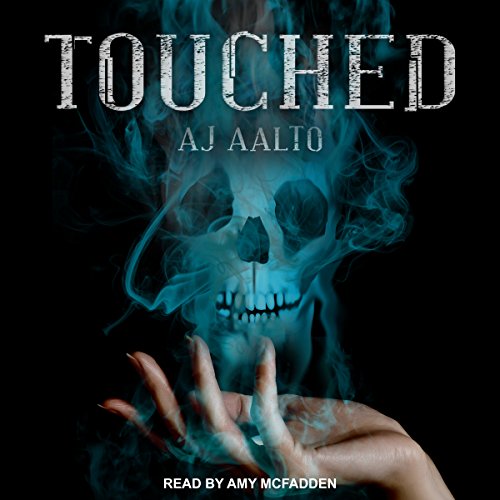 The media has a nickname for Marnie Baranuik, though she'd rather they didn't; they call her the Great White Shark, a rare dual-talented forensic psychic. Twice-Touched by the Blue Sense - which gives her the ability to feel the emotions of others, and read impressions left behind on objects - Marnie also has a doctorate in preternatural biology and a working knowledge of the dark arts. She is considered without peer in the psychic community.

Then her first big FBI case ended with a bullet in one shoulder and a chip on the other, a queasy heart and a serial killer in the wind, leaving her a public flop and a private wreck. When the FBI's preternatural crimes unit tracks her down at a remote mountain lodge for her insight on a local case, her quiet retirement is promptly besieged by a stab-happy starlet, a rampaging ghoul, and a vampire-hunting jackass in tight Wranglers. Marnie figures the only real mystery is which one will kill her first.

Too mean to die young, backed up by friends in cold places, and running with a mouth as demure as a cannon's blast, Marnie Baranuik is about to discover that there's no such thing as quitting time when you're Touched.

What did you love best about Touched?
I absolutely LOVE the snark, humor, and action. But mostly it's so nice to actually have a book with a real story line, plot, character development, it's non stop entertainment.

Did the plot keep you on the edge of your seat? How?
never ending action or witty banter.

What does Amy McFadden bring to the story that you wouldn’t experience if you just read the book?
I read this book and was delighted when they added it to audible, although I was nervous ( I am the ultimate narrator snob) Amy was a perfect choice, she is amazing at holding character, accents, and different voices without sounding like an idiot. I would listen to her again in a heartbeat

If you were to make a film of this book, what would the tag line be?
So amazeballs we had to make it into a Movie!!! well, okay, so I"ll never make a career in marketing. But I would watch this movie, for realsies.

Any additional comments?
if you like books like the Kate Daniels series, Charlie Davidson, Iron druid, or Mercy Thompson this book is absolutely for you!

Great Story, if a Gross One

I really enjoyed this book. The main character is a hoot, if foul mouthed. She's painfully human, meaning she's not perfect. However, there are times when she says and does things that are ingenious. There are parts that made me laugh out loud and others that made me cringe. There is a LOT of grossness in here, given what the story is about, so it's not unexpected. I highly recommend this book. As for the narration, Amy McFadden is a delightful discovery! She brings Marnie and her world to vivid life. I am eager to read and listen to the next book!

I am not vampire fan - the only good vampire is a dead vampire. The romanticizing of vampires is exasperating. The description did not mention vampires, If it had I would not have purchased it.
The wining and gnashing of teeth further detracted from any enjoyment.

honestly an amazing stumble upon! I absolutely found my new favorite author! it fits all my favorite in 1 book

The story is totally original, quite a feat in the paranormal field. The narrator is incredible. The combination of excellent urban fantasy plus excellent narration is a rare listening gem. Don't miss this one.

This is not just another cut and paste paranormal book and is fast paced enough to keep you wanting more. The story line is well defined and easy to follow with some surprising twists and unexpected moments. Just as you think you know what’s going to happen next,your pleasantly surprised. I really enjoyed the dynamics of the main love interests and the whole story was well written.#magicalsystems,#vampires,#urbanfantasy,#provocative,#magical,#tagsgiving,#sweepstakes

I can't imagine being stupid enough to give this more than one star. Just a horrible story.

The planets must have aligned when A. J. Aalto and Amy McFadden were brought together to present this book! When a story has a cracking good character like Marnie Baranuik she needs a master narrator like Amy McFadden. And look! We got her! Finger pistols all over!!!!!

It did not play all the way through, I don't why.

I like the book ,it just stopped, I don't know why disappointed .I got the 1st audiobook no problem, and the third one ok.

All the banter back and forth made me loose my concentration on the story. Which I totally forgot!!!!!!!